Membership for Hezbollah and Hamas in the German state of North Rhine-Westphalia has increased since the influx of refugees to the country. 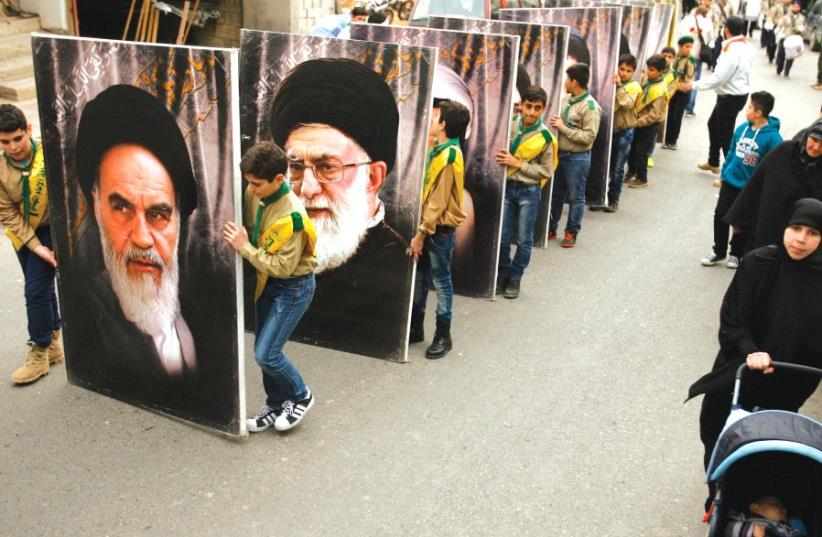 Hezbollah supporters carry portraits of the founder of Iran’s Islamic Republic, Ayatollah Ruhollah Khomeini (left), and supreme leader Ayatollah Ali Khamenei, as they march in the southern Lebanese town of Kfar Hatta on March 18
(photo credit: AFP PHOTO)
Advertisement
Hezbollah combatants have entered Germany since mid-2015 as part of the wave of refugees from the Middle East, according to a German intelligence report reviewed by The Jerusalem Post.The report released this month shows increased membership for Hezbollah and Hamas in the German state of North Rhine-Westphalia.“Since mid-2015 there are increased indications of fighters from Shi’ite militias entering Germany as legal refugees,” according to the intelligence report. “The indications regarding roughly 50% [of the fighters] show a direct connection to Hezbollah.”The EU designated Hezbollah’s so-called military wing as a terrorist organization in 2013.Militants who entered Germany with no concrete links to a specific terror group had largely fought on the side of Shi'ite militias against the Islamic State in Syria and Iraq, according to the report.The danger these Hezbollah members pose is difficult to assess without a close examination of the Islamists, the report read.North Rhine-Westphalia is home to the Imam-Mahdi Center in the city of Münster, which is a meeting place for Hezbollah members, according to the report. Additional cities where Hezbollah is active in North Rhine-Westphalia are Essen, Bottrop, Dortmund and Bad Oeynhausen, it continued.It is unclear how many Hezbollah terrorists disguised themselves as asylum-seekers to enter Germany. But according to Germany’s federal intelligence agency, there are 950 active Hezbollah operatives in the Federal Republic.The intelligence officials said there is no evidence the Hezbollah members in Germany are departing for war zones. North Rhine-Westphalia’s intelligence agency reported an increase of Hezbollah membership, from 100 in 2015 to 105 in 2016. German intelligence services define Hezbollah members in Germany as part of the Lebanese Shi’ite’s organization’s political wing.The North Rhine-Westphalia intelligence agency did not detail the number of Hezbollah fighters, who would be sanctioned terrorists, disguised as refugees that entered Germany since mid-2015.Leading counterterrorism experts do not divide Hezbollah into political and military wings. The US, Canada, Israel and the Netherlands classify Hezbollah as a unitary terrorist organization.The intelligence document noted that Hezbollah’s goal is the “destruction of the State of Israel as well as Islamic domination over Jerusalem.”The Post reported in August that German and Israeli lawmakers wrote Germany’s Interior Minister Thomas de Maizière that “it is unacceptable that terrorist organizations [Hezbollah and the Popular Front for the Liberation of Palestine] in Germany are planning events and recruiting supporters while the responsible authorities do not have any legal tools to prevent it.”De Maizière declined to ban Hezbollah’s entire organization or the PFLP.The intelligence agency in North Rhine-Westphalia said it is unaware of Hezbollah plans to carry out terrorist attacks in Germany.The number of Hamas members in North Rhine-Westphalia rose to 75 in 2016 from 65 in 2015. Both the US and the EU classify Hamas as terrorist organizations.It is unclear why Germany’s interior minister does not detain Hamas members. Hamas, according to the federal intelligence report, is represented in Germany by the NGO Palestinian Community in Germany (PGD). Hamas members, wrote the report, obtain funding in Germany via donations.State officials said Hamas supporters were present at a number of PGD demonstrations and other events in North Rhine-Westphalia, in the cities of Dortmund, Essen, Düsseldorf, Bonn and Wuppertal. Hamas supporters use Germany as a location to “collect funds” and “recruit new members to spread their propaganda,” said the report.