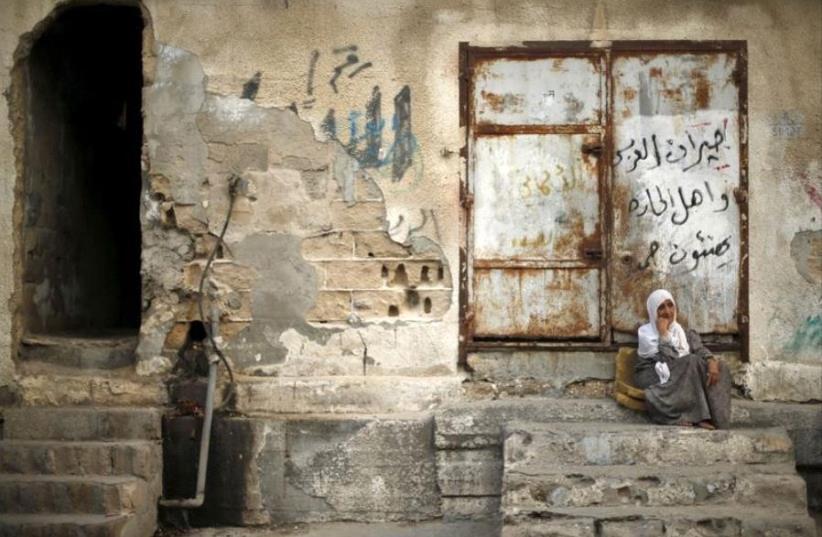 A Palestinian woman sits outside her house as she escapes the heat during a power cut at Shatti (beach) refugee camp in Gaza City September 15, 2015.
(photo credit: REUTERS)
Advertisement
About 0.1% of humanitarian funding goes to addressing violence against women and girls worldwide, charities said on Monday, prompting calls for a new "feminist" approach to foreign aid.
Less than $2 was allocated to each woman or girl at risk of rape or abuse in conflict zones from 2016-2018, out of $41.5 billion in humanitarian aid, said the International Rescue Committee (IRC) and women's rights group VOICE in a report.
"The statistics clearly show that women and girls are doubly disadvantaged in humanitarian settings," said IRC President David Miliband.
"To compound the problem, the world is looking the other way," he added in a speech on Monday at Georgetown University.
One in five women who have fled home experiences sexual violence, while nine in 10 countries with the highest rates of child marriage are also wracked by conflict, said the report.
Two-thirds of funding requests for gender-based violence programs went unmet in the last three years, it said, while even the requests would have fallen far short of the need.
In Central African Republic, where rape has been widely documented as a weapon of war, no funding for gender-based violence work was recorded at all, it said.
In Nigeria, only $3.8 million was allocated for women and girls out of $40 million requested by the United Nations.
"We need to engage more systematically with the questions of power that are raised by feminist thinking," said Miliband, Britain's former foreign minister, adding that meant working harder to support women within and outside the organization.
He called on other humanitarian agencies to create a gender equality scorecard to measure progress, and to prioritize women's voices in designing and assessing programs.
Some countries, such as Sweden, France and Canada have announced feminist foreign aid policies in the last five years, pledging funds specifically to target gender equality, said Miliband, but they are the exceptions.
An index released last week showed not one country is on track to reach gender equality by 2030, one of the goals set by the United Nations.
"This report from IRC is welcome and greatly overdue," said Yasmeen Hassan, global director of women's rights group Equality Now in an email.
"Women's rights organizations have decried the lack of work to prevent and address gender-based violence - including sexual violence, sex trafficking, domestic violence, and 'child' and forced marriage - in humanitarian settings where it is sorely needed."