Rivlin: This shows the true face of terrorism 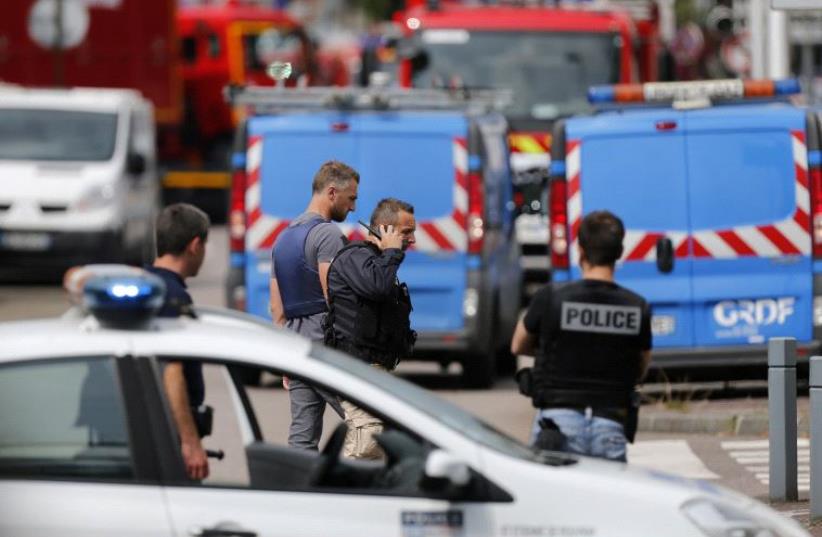 French police officers and firemen arrive at the scene of a hostage-taking at a church in Saint-Etienne-du-Rouvray, northern France, on July 26, 2016
(photo credit: CHARLY TRIBALLEAU / AFP)
Advertisement
Assailants loyal to Islamic State forced an elderly priest to his knees, slit his throat, and took several worshipers hostage in a French church on Tuesday before police shot the attackers dead.Islamic State claimed responsibility for the attack, which took place during morning mass at the Saint-Etienne parish church, south of Rouen in Normandy. Five people were initially taken hostage.The terrorist group’s Amaq news agency said two of the group’s “soldiers” carried out the operation in response to the call to target the countries of the “Crusader coalition.” A police source said it appeared the priest had his throat slit.The attackers forced Father Jacques Hamel, 85, to kneel before killing him and also filmed the murder, a nun who escaped the scene said on French radio. Police arrested one person in connection with the attack, a source close to the inquiry said.The nun was one of severalpeople taken hostage by the terrorists during a morning mass at the church in Saint-Etiennedu- Rouvray.“They forced him to kneel and he tried to defend himself and that is how the drama started,” the nun, who gave her name as Sister Danielle, told RMC radio, adding that she fled at the moment that one of the attackers killed the priest. “They filmed themselves. It was like a sermon in Arabic around the altar.”Several French media reported that one of the terrorists was a local man who had spent a year in jail on his return from Turkey after being intercepted trying to travel to Syria, but had been freed on bail with an electronic tag pending trial for alleged terrorism offenses.The Islamic State claim followed President François Hollande’s statement that the two hostage-takers were terrorists who had pledged allegiance to the group.“Islamic State has declared war on us, we must fight this war by all means, while respecting the rule of law, what makes us a democracy,” he told reporters at the scene.The incident was lamented by Pope Francis and sent shock waves through the Catholic world.“The fact that this episode took place in a church, killing a priest, a minister of the Lord and involving the faithful, is something that affects us profoundly,” Vatican spokesman Father Federico Lombardi said.Prime Minister Manuel Valls branded the attack “barbaric” and said it was a blow to all Catholics and the whole of France. “We will stand together,” he said on Twitter.In Jerusalem, President Reuven Rivlin, in a meeting with the recently appointed Custos of the Holy Land Father Francesco Patton, said the attack shows the true face of terrorism and its brutal nature. He once again called on the free world to unite in combating this cruel phenomenon.In conventional warfare, houses of religion are generally regarded as safe havens. But not in a war initiated by fundamentalists who shun the values of civil society, he said.“This was an attack by radical, extremist terrorists, who have struck at the very symbol of peace and committed murder in cold blood in the house of God while pretending to speak in [God’s] name,” said Rivlin.“The whole free world must understand that our values are under attack. We must fight to defend them, lest we be overtaken by waves of intolerance and hatred,” he stated. “Israel stands side by side with the people of France, and we send our thoughts and prayers to the victims and their families.”The attack is the latest in a string of deadly terrorist assaults in Europe, including the mass killing in Nice on Bastille Day and four incidents in Germany.Rabbi Abraham Cooper, associate dean of the Simon Wiesenthal Center, described Tuesday’s attack as an “evil abomination that debases all humanity.”“How many more terrorist outrages will have to occur before the US together with NATO and other civilized nations will finally wipe out Islamic State and other Islamist terror groups?” he asked.“Words alone will never defeat this evil.”The European Jewish Congress denounced the murder as an attack on Christians, Jews and Muslims alike.“An attack against a religious institution and a man of God is an attack against all religions and faith itself,” Moshe Kantor, president of the EJC, said.“This dastardly attack will only strengthen our resolve to defeat the enemy of Islamist terrorism.”Rabbi Pinchas Goldschmidt, the chief rabbi of Moscow and president of the Conference of European Rabbis, said in reaction to the attack in Normandy: “The USA after 9/11 became a different country, after terrorism turned a very open society into a country with the mentality of a fortress. Europe after the latest string of attacks is now going through the same process.This will bring monumental political change, with new interests, priorities and allies.”The Israelite Central Consistory of France umbrella body said that while the terrorists targeted the Catholic Church, the whole of France was in mourning.“Once again the jihadists – enemies of the [French] Republic and democracy – tried to undermine the foundations of our society,” it said.Chief Rabbi of France Haïm Korsia and President of the Consistory Joel Mergui urged the authorities to implement all available means to ensure the safety and protection of citizens, while respecting the values embodied by France’s motto: liberty, equality, fraternity.