Israeli leaders expressed their deepest sympathies to the people of America following the mass shooting in Las Vegas that injured hundreds and claimed the lives of at least 50 people.

By JOY BERNARD
OCTOBER 2, 2017 18:46
Prime Minister Benjamin Netanyahu issues condolences following Las Vegas attack (Tovah Lazaroff)
Advertisement
Israeli officials expressed their solidarity on Monday with the families of the victims and those who were injured in America's deadliest shooting to date, which took place on Sunday night in Las Vegas and resulted in the death of 50 people. The Tel Aviv-Yafo municipality building wore the red, blue and white colors of the American flag Monday evening, lighting up in a moving gesture of support to Israel's allies affected by the devastation. 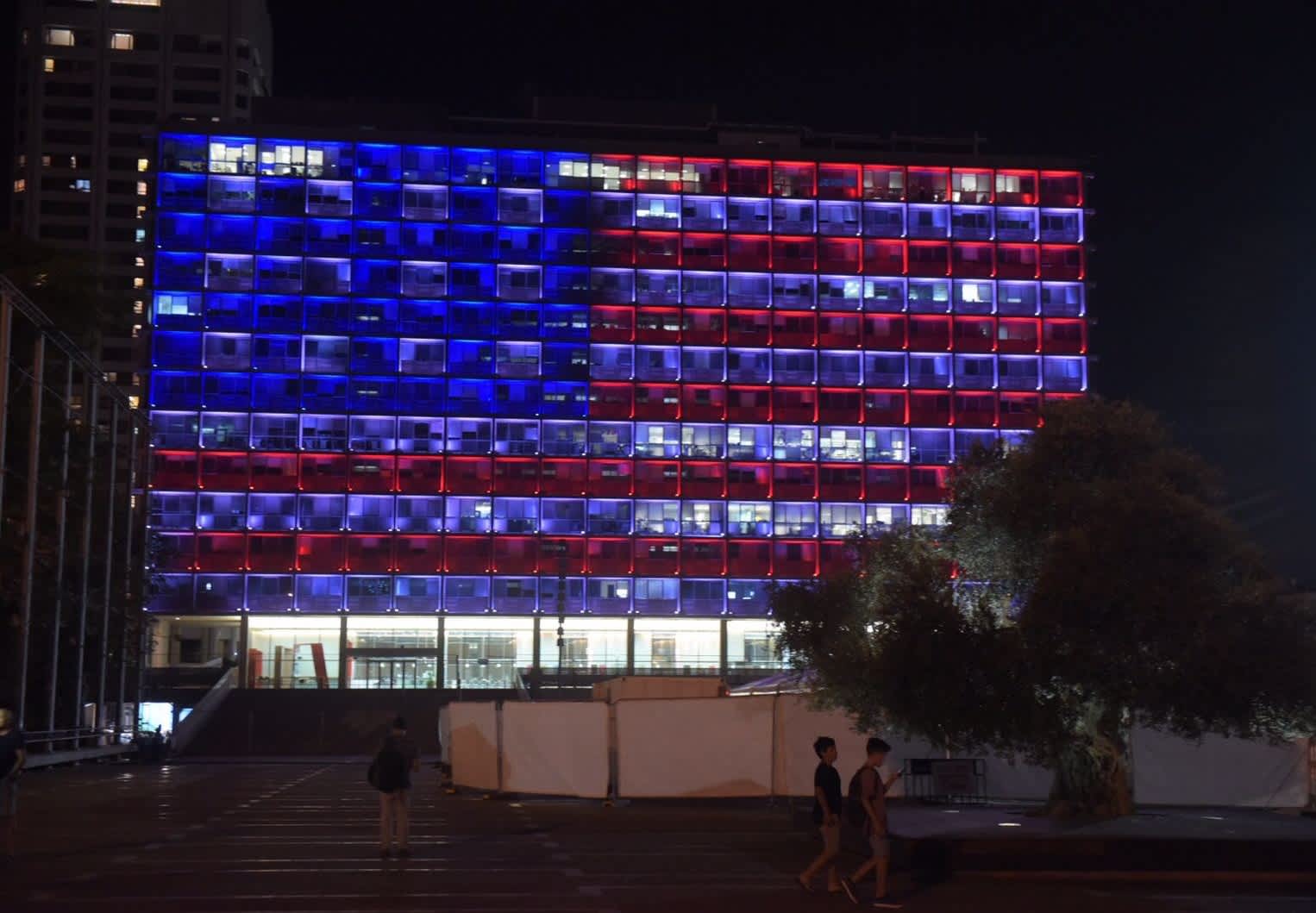 The Tel Aviv-Yafo municipality building wears the colors of the American flag in a show of solidarity with Americans reeling from the Las Vegas shooting. Prime Minister Benjamin Netanyahu, whose country is no stranger to such acts of brutality, released an official statement in which he wrote that "on this awful day, the people in Israel stand shoulder to shoulder with the American people. Our hearts are with the families of the victims and we wish full recovery to the injured. We grieve with you."Israeli President Reuven Rivlin echoed the premier's sentiment in a letter he addressed to US President Donald Trump, writing that "the people of Israel join me in sending our deepest sympathy to you, to the participants in the festival, the people of Las Vegas and to all the people of the United States following this shocking attack which took the lives of so many innocent people and injured so very many more.""We stand with you as you mourn the terrible loss of life and injury following this senseless attack on people who had merely gathered together to listen to music," the president added, noting that the mass shooting targeted a lively outdoor country music festival in Las Vegas, Nevada.
Mandalay Bay Las Vegas Shooting October 1, 2017. (YouTube/yx0ify)
Rivlin also wrote to the US president that the people of Israel wished to "convey our heartfelt condolences to the bereaved families and send our best wishes for a speedy and complete recovery to the many injured."Deputy Foreign Affairs Minister Tzipi Hotovely also expressed her shock at the horrific attack, stating on Monday that "Israel is horrified by the mass murder that took place in Las Vegas. I hope that the connection with the Israelis in Las Vegas who went missing will be renewed quickly."Hotovely was referring to a report on Monday afternoon that seven Israelis who were staying in the area of the attack could not be contacted. Sam Grundwerg, Israel's Consul General in Los Angeles, confirmed to the The Jerusalem Post that there were eight Israelis who did not contact their families in the wake of the carnage but also said that there were no reports of any Israelis harmed or directly affected by the shooting. The consulate, which is in charge of the entire southwestern United States area including Las Vegas, sent out a search team overnight in an attempt to locate them.  "There are eight Israelis we are still waiting to contact, that does not necessarily mean that they are in danger or there is concern about them, but we are working in every way to reach them in the hope that we will be able to confirm soon they are safe," Grundwerg said. Asked whether there were special instructions for the Israeli officials or the Jewish community in US, Grundwerg said that "although the motive of the shooter is not yet clear, because this does not appear to be aimed at Jewish or Israeli targets, there is no reason to for special instructions. At the moment all our efforts are aimed [at contacting] the Israelis in Las Vegas." Knesset Speaker Yuli Edelstein took to social media to express his sympathy with the American people, tweeting at his American counterpart Paul Ryan: "Dear Paul Ryan. Deepest condolences on the Las Vegas tragedy. We stand with you and the American people at this difficult hour."

Dear @SpeakerRyan . deepest condolences on the Las Vegas tragedy. We stand with you and the American people at this difficult hour.
— Yuli Edelstein (@YuliEdelstein) October 2, 2017


He also said earlier in the day that he wished to "send his sincerest condolences to all the citizens of the United States following the horrifying carnage that happened tonight in Las Vegas."Education and Diaspora Affairs Minister Naftali Bennett penned a tweet of consolation which said: "The hearts of all Israelis are with the American people on this day of profound tragedy. We pray for the wounded. God bless you."

The hearts of all Israelis are with the American people on this day of profound tragedy.
We pray for the wounded.
God bless you.
— Naftali Bennett בנט (@naftalibennett) October 2, 2017


Zionist Union MK and Israel's former Foreign Minister Tzipi Livni also tweeted her support of the American nation in this difficult time, writing in English: "Horrific massacre in Las Vegas. Our hearts and thoughts go out to the families of the victims."

Horrific massacre in Las Vegas. Our hearts and thoughts go out to the families of the victims.
— ציפי לבני (@Tzipi_Livni) October 2, 2017


MK Nachman Shai (Labor), who serves as the Knesset's Deputy Speaker and the chair of the Israeli parliament's lobby for US-Israel relations, joined the expressions of sympathy as well. "I would like to express my condolences to the American people for the awful carnage that took place late last night. There is no limit to human evil. Our world is flooded with violence and conquers again and again new plots of land and takes down innocent and helpless people."MK Shai also said that he "feels profound understanding and belonging to the tragedy that plagued the American people" and that he sends his condolences to "the US president, to the entire American leadership and to every American out there. I believe in the triumph of good over evil and in the triumph of good over hatred and hope that this terror will be uprooted." Jewish groups in America also related their support.The Jewish Federations of North America issued a statement encouraging anyone and everyone to donate blood for the hundreds of wounded.The attack, the group said, is just the latest instance "of senseless violence that terrorizes innocent people everywhere.""We send our sympathies to the families and friends of those murdered — may their memories be a blessing — and our prayers for a speedy recovery to those injured," said the umbrella organization.The Anti-Defamation League offered a more political statement, amid a rolling debate over the state of gun control in America."One thing is clear," said the organization's head, Jonathan Greenblatt: "The threat of mass violence against innocent civilians in America has not abated."Greenblatt said the ADL would be investigating the shooter's background for ties to extremist groups.Chabad Rabbi Mendy Harlig, who also serves as a chaplain with the Los Vegas Metro Police, told the Jerusalem Post that he was trying to support the police officers effected by the incident.   "We're trying to give comfort to our personnel and their families," Harlig said. "We have a few Jewish members in the family of Los Vegas police deportment. In addition we are working with the Israeli Consulate to determine whether there are Israeli victims." Chabad operates a Jewish center in Las Vegas, serving the local Jewish community as well as many Jewish tourists and business people visiting the city.

Michael Wilner and Yair Attinger contributed to this report.