The anti-BDS resolution was supported by the representative for political education from the Union of Jewish Students in Baden, said the Youth Forum representative. 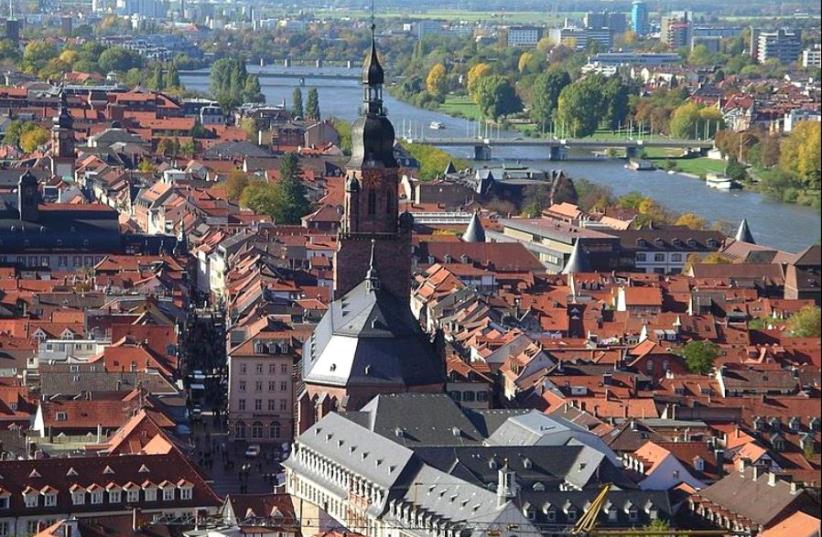 Heidelberg
(photo credit: GERMAN WIKIPEDIA)
Advertisement
Heidelberg University's student council voted on Tuesday to classify the boycott, divestment, sanctions campaign targeting Israel
as antisemitic and bar university space and funds to advocates of BDS.A representative for the Youth Forum of the German-Israeli friendship society in Heidelberg, told The Jerusalem Post on Friday that the forum submitted the anti-BDS proposal. "The student council said BDS is antisemitic and BDS groups and affiliated groups will not be supported with rooms or finances, " said the representative. The anti-BDS resolution was supported by the student council's political education department  and the Union of Jewish Students in Baden, said the Youth Forum representative.The secret vote to reject BDS was 16 in favor, 15 opposed, with 15 abstentions.The university is located in the town of Heidelberg in the southwestern state of Baden-Württemberg and was founded in 1386 by
a decree of Pope Urban VI, marking it as the oldest institution of higher learning in Germany. The student council decision to
ban BDS will cover the over 30,000 students who attend the university."The passed resolution is an important and necessary consequence from the existing position of the student council against antisemitism, in which the resolution regarding BDS is concretely cited. The student council bolsters our engagement against Israel-related antisemitism at our university and in our city," said the forum's spokesman Victor Marki. He added that at many universities, the BDS campaign has given a boost to the exclusion of Jewish students."As a result, the decisive action of the student council at Heidelberg against BDS is also a model for other universities and cities," said Marki.Naomi Ellenbogen, a spokeswoman for the Union of Jewish Students in Baden, said that the anti-BDS resolution is a sign "that the fight against antisemitism should not remain lip service." Heidelberg University students followed anti-BDS resolutions at two other German universities --the Goethe University in Frankfurt in 2017 and Leipzig University in 2016. The University of Vienna in Austria passed an anti-BDS resolution in 2016. All of the resolutions designated BDS as antisemitic.In December, Heidelberg's adult educational center came under fire for providing a room to Jeff Halper, a left-wing Israeli advocate of the BDS campaign. The pro-BDS Palestinian Middle East Initiative Heidelberg organized Halper's talk and previously sponsored an event with an alleged pro-Hamas advocate, Abed Schokry, at the educational center in July. The director of the educational center, Silke Reck, defended the BDS event. The center receives public funds.The Heidelberg University student vote comes on the heels of Germany's new antisemitism commissioner Felix Klein calling on the Cologne-based Bank for Social Economy to end its BDS business relations. The bank is the leading enabler of BDS financial fund raising accounts in Germany, according to critics. “We condemn the leaders of any bank that continues to allow BFS [Bank for Social Economy] to do business with those who work to damage and ultimately do away with the Jewish state," Rabbi Abraham Cooper, the associate dean of the center, told the Post on Monday. The Wiesenthal Center may include the bank's three top executives Harald Schmitz, Oliver Luckner and Thomas Kahleis on its list of the top ten worst outbreaks of antisemitism and anti-Israel sentiment at the end of 2018.In April, the LGBT organization Magnus Hirschfeld Foundation pulled the plug on its Bank for Social Economy account to protest the bank's aiding of BDS.