Theresa May, a ‘long-standing friend of Israel’

The parliamentary chairman of the Conservative Friends of Israel issued a statement saying that “Israel can rest assured that a UK led by Theresa May will be there in its moments of need." 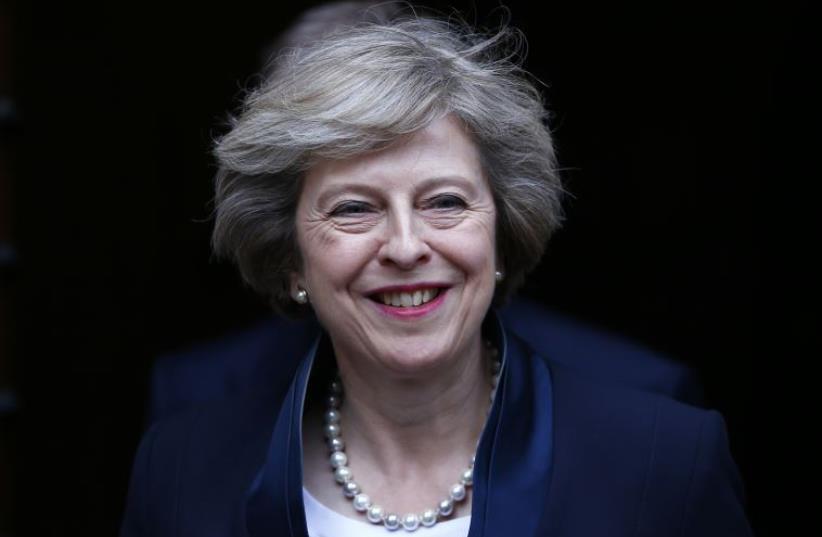 Theresa May emerges to speak to reporters after being confirmed as the leader of the Conservative Party..
(photo credit: REUTERS)
Advertisement
Jerusalem is confident that the strong relationship with Britain it enjoyed under Prime Minister David Cameron will continue when Home Secretary Theresa May takes over the job by Wednesday.May, according to former ambassador to London Daniel Taub, “has been a long-standing friend of Israel and the Jewish community.”He said that as home secretary, May was very supportive of “our efforts to deepen British- Israel ties in the area of homeland security, and also very receptive to the concerns of the Jewish community regarding anti-Semitism and violent extremism.” Her ministry was responsible for Britain’s MI5 intelligence service, and as such was both aware and appreciative of the close intelligence and security cooperation between the two countries.Jerusalem had no formal comment Monday on the political developments in Britain, waiting until she formally takes over as prime minister before issuing a congratulatory statement.One official said that when it comes to Israel, May “comes with her heart in the right place.”If, indeed, that is the case, then she will follow a long line of British prime ministers, going back to Margaret Thatcher and including John Major, Tony Blair, Gordon Brown and Cameron, who were considered good friends in Jerusalem.May’s only visit to Israel was in the summer 2014, when the bodies of the three kidnapped youth from Gush Etzion were discovered.In a speech in September of that year to the Conservative Friends of Israel, she discussed that trip, and that speech provides a glimpse of her outlook on Israel.“The murder of those boys – and the loss of life among Israelis and Palestinians in the subsequent military operations in Gaza – is a sad reminder that the Arab/Israeli conflict is not just an abstract debate argued over the pages of Western newspapers and television screens,” she said.“It is a real conflict with innocent victims on both sides. It is about self-identity for the Palestinian people. And it is about Israel’s right to defend its citizens from indiscriminate terrorist attacks and existential threats.”May ticked off the threats Israel faces, from Hezbollah and Hamas to the collapse of Syria the threats from Iran. She then said, “No democratic government could, in the face of such danger, do anything but maintain a strong defense and security capability and be prepared to deploy it if necessary. That is why I – and the whole British government – will always defend Israel’s right to defend itself.”May said that those sympathetic to Israel’s security predicament also must make clear that the loss of all civilian life is an appalling tragedy.“We must remember that there will be no lasting peace or justice in the region until the Palestinian people are able to enjoy full civil rights themselves,” she said.May said that while it is easy to talk about a two-state solution, it is almost impossible to know how to move toward that goal.“But that does not mean we can afford to give up,” she said. “Taking even the smallest of steps towards a lasting peaceful settlement will take acts of huge political bravery and great statesmanship on both sides of the divide – but they are steps that need to be taken.”In another speech, this one at a Bnei Akiva Independence Day celebration at a London synagogue last year, May – after gallantly trying a few words in Hebrew – said that Israel is a “fulfillment of many generations of struggle.”Noting that Independence Day falls after Memorial Day for Israel’s fallen soldiers, she said it was a “tragic fact of history that the Jewish people have had to protect themselves from repeated attempts to obliterate them, and that the safety of the Jewish people can never be taken for granted.”She ended her speech with the three-word Bnei Akiva Hebrew battle cry: “Kadima [forward], Bnei Akiva.”The parliamentary chairman of the Conservative Friends of Israel, MP Eric Pickles, issued a statement saying that “Israel can rest assured that a UK led by Theresa May will be there in its moments of need.”May, he said, “saw how terrorism affects Israel during her first visit to the country in the summer of 2014 when the bodies of the three Israeli teenagers kidnapped by Hamas were found. She personally saw how deeply the sad events affected the country and was absolute in condemning the act of terrorism, vowing that ‘Britain stands with Israel.’” He said that May has a “deep understanding of the seriousness of the threat radical Islam poses to the UK, Israel and wider international community. It will not be one that she takes lightly.”