“The Namer with the Trophy system will form the highest level of protection for IDF soldiers and provide them with defense and a significant advantage on the battlefield.” 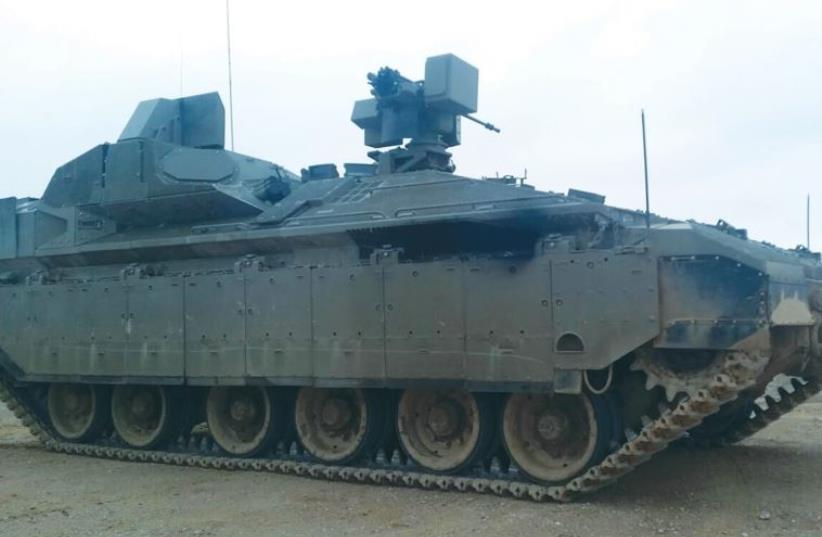 A NAMER APC with the Trophy HV active protection system is poised for action.
(photo credit: DEFENSE MINISTRY)
Advertisement
A number of Namer armored personnel carriers made over the past two months have been equipped with the Trophy HV active protection system, which destroys antitank missiles and rocket-propelled grenades in mid-air, The Jerusalem Post has learned.At the end of January, the Defense Ministry revealed that the first Namer armored personnel carrier equipped with the system, made by Rafael Advanced Defense Systems, had come off the production line.Since then, more of the heavy APCs have been made with the protection systems, which already exist on Merkava Mark IV tanks, and successfully worked in the 2014 Gaza conflict (Operation Protective Edge) to defend tanks.Every new Namer will now receive Trophy, according to the Defense Ministry’s Merkava Tank Administration.The Defense Ministry has doubled orders of Namer and Merkava Mark IV tanks earlier this year. Both platforms are key to the ability of ground forces to carry out offensives in Gaza and southern Lebanon, where Hamas and Hezbollah are heavily armed with anti-tank missiles and RPGs.In January, the IDF completed its first series of drills to test the Namer’s Trophy system, at the Armored Corps School in southern Israel. The trial was held by Defense Ministry engineers and IDF ground forces, and came following a series of live-fire tests in which missiles were fired at the Namer and destroyed by Trophy.The Trophy-equipped Namers will be able to enter battlegrounds rife with antitank and RPG threats, and safely transport infantry. The Trophy system uses radar panels to detect and follow threats before destroying them in mid-air with interceptors.“The Namer with the Trophy system will form the highest level of protection for IDF soldiers and provide them with defense and a significant advantage on the battlefield,” Brig.-Gen. Baruch Matzliah, the head of the Merkava Tank Administration, said in January.In mid-Feburary, the Defense Ministry said it had placed NIS 340 million worth of orders for parts and systems for Namers and Merkava Mark IV tanks, with Israeli Defense Industries. In 2015, the Defense Ministry doubled its orders for parts for both vehicles.The military is keen on modernizing its fleet of APCs and gradually replacing its aging M113 APCs, which are significantly more vulnerable on the battlefield.