According to Yad Vashem some 1.5 million Jews served in the various allied armies during the war. 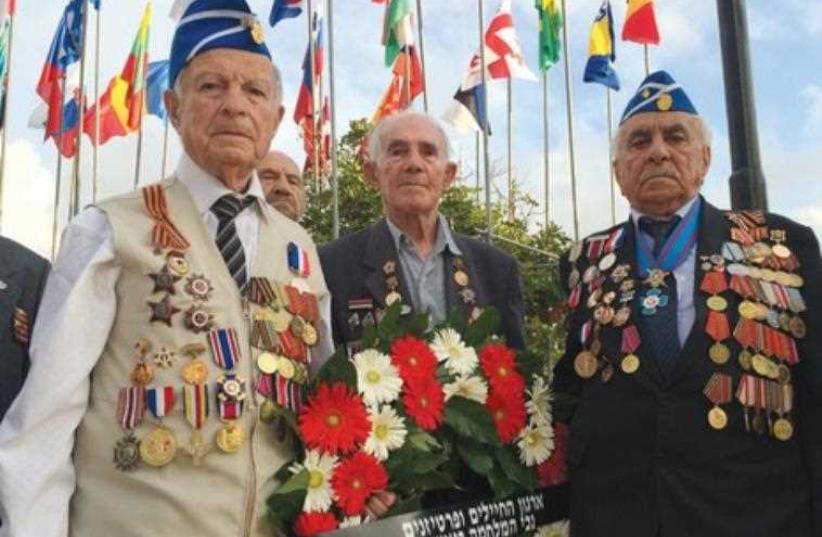 Jewish veterans of WWII are honored in May 2014 at Yad Vashem in Jerusalem
(photo credit: SAM SOKOL)
Advertisement
Almost of half of Israelis polled have expressed support for making, May 9, Victory Day, the Soviet commemoration marking the defeat of Nazi Germany in World War II, an Israeli holiday.Given the high number of Israelis of Russian and Ukrainian origin, the holiday is widely celebrated in Israel on an unofficial level though many Israelis are unaware “that the Jewish warriors’ contributions to the war efforts were a big part of the victory against Nazi Germany. There is a need for a call of action in order that this legacy will not be forgotten,” Victory Day Headquarters, an advocacy group founded by Russian businessman German Zakharyayev, said in a statement.According to Yad Vashem, some 1.5 million Jews served in the various allied armies during the war.Some 48 percent of Israelis support the move, according to a poll conducted by the Dialog Institute under the supervision of Tel Aviv University’s Prof. Camil Fuchs and paid for by Victory Day Headquarters.The activist group hopes to gain widespread acceptance of the 26th of Iyar on the Hebrew calendar, which corresponds to the ninth of May, as a day of celebration.“Jewish fighting was an integral part of Jewish saving,” said Beni Briskin of Victory Day Headquarters and the Russian Jewish Congress.“Anatoli Shapiro, for example, a Red Army officer who commanded the division that liberated Auschwitz, was the first man to open the gates and inform its prisoners ‘the Red army has come to liberate you.’ His story reflects most of all the essence of the Jewish fighters, fighters who didn’t just ask to bring freedom to Europe, but fighters who fought to save their brothers and sisters.”Former Soviet Soldiers hold parades around the country, often wearing their old uniforms, while Yad Vashem hosts a ceremony honoring the former military men.Israel declined to send a representative to Moscow for this year’s Victory Day due to tensions over the sale of anti-aircraft missile systems to Iran.