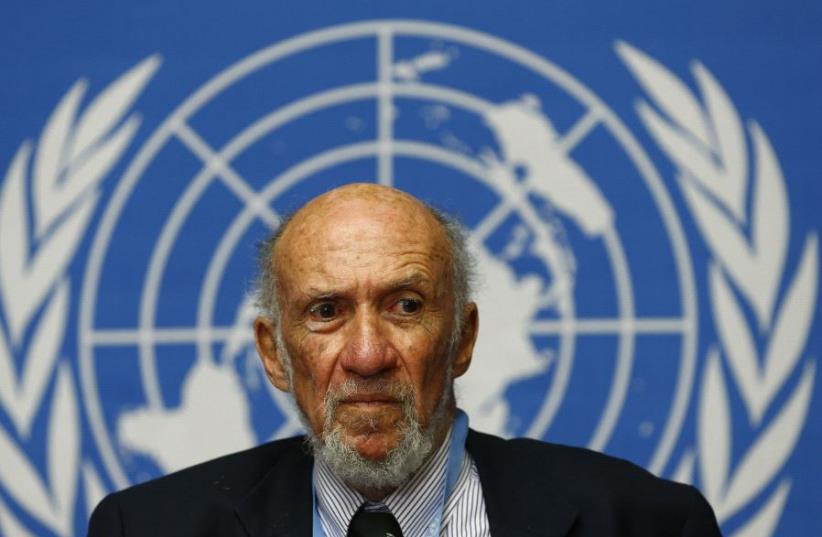 Richard Falk
(photo credit: REUTERS)
Advertisement
Richard Falk, an American professor who has held multiple positions at the United Nations which he has in the past notoriously used to propel an anti-Israel agenda, was discovered to be a member of an antisemitic hate group on Facebook. Sources close to The Jerusalem Post discovered Falk is one of  5,408 members of "Shoah," the Facebook group of an organization by the same name. The British group began operating in 2011 with the aim of ending "Zio-Nazi oppression" and the "environmental destruction of Palestine." Although the complete members list and the true total number of members is visible only to accepted members, The Jerusalem Post obtained a screenshot of Falk's membership as of Sunday, July 30, 2017:

Screenshot of Richard Falk's membership in the Shoah: Palestinian Holocaust Facebook Group, taken in July, 2017.
The Shoah Facebook group has spread severely anti-Israel and antisemitic imagery, often depicting Israel and global Jewry as one and the same:When questioned about his membership in the group, Falk told The Jerusalem Post, "Thank you [for] notifying me. I had never heard of this group before. I went to the link for the group, and found out that I had been added by someone named John Phoenix, whom I don't know..."This is a curious statement, considering Falk is friends with John Phoenix (the administrator of the Shoah group) on that same Facebook account. Being "friends" on Facebook requires action by both parties:Falk told the Post that he left the group. Citing the Post's concerns about the group's content, Falk added, "I did look at some of their postings, and although I didn't run across any 'comments, memes, and images' that were 'blatantly anti-semitic' I did findseveral postings that were offensive and in poor taste."Falk did indeed leave the group, however, sources informed The Jerusalem Post that he was still a member of a closed Facebook group that runs in parallel to the original group, entitled "Shoah friends." The following is a screen capture of Falk's membership in the closed group as of August 1, 2017: 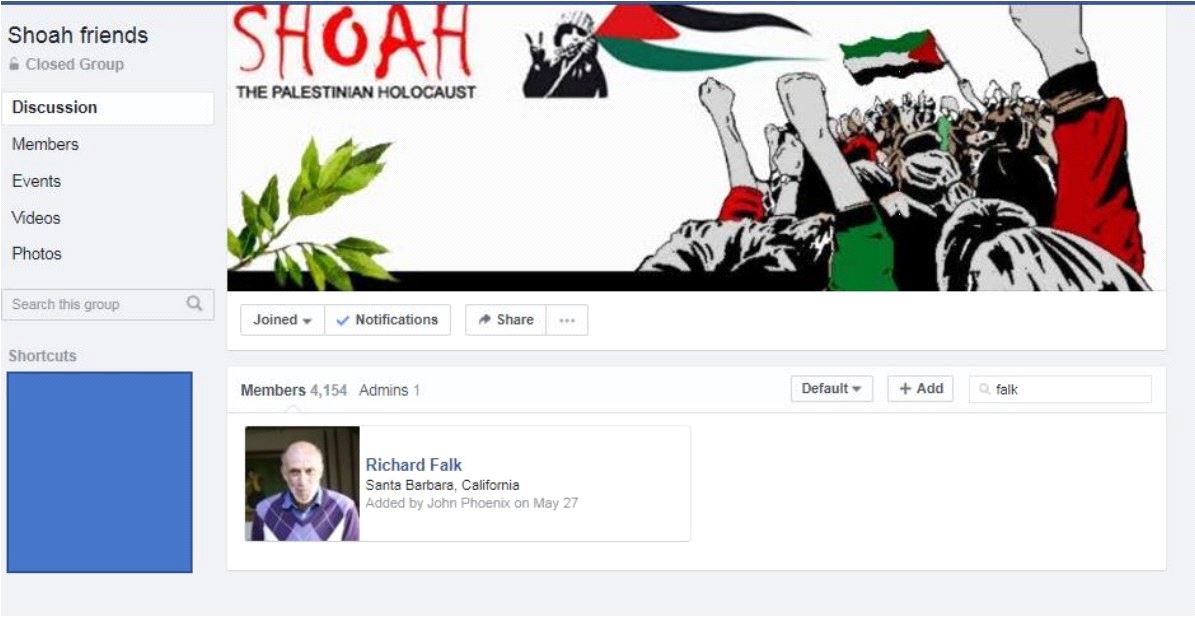 The "Shoah Friends" group has similarly antisemitic, anti-Israel content, including the following which have been screen captured from the private group:The Jerusalem Post again reached out to Falk for comment on this development. His reply was similar: "Yes, it seems I was added, again without my approval or even knowledge, to this group, and I have again left with instructions not to be added in the future. Hopefully, but not necessarily, this will be end."Membership in Shoah and Shoah Friends is consistent with Falk's other social media behavior. With the same public profile, he is a member of other groups such as "Third Intifada of Palestine" and "Suzanne Vega: don't play for apartheid Israel." Two key issues arise out of this scenario:1) Facebook's responsibility for hate contentShoah and Shoah friends are two examples of many such groups which disseminate clear hate speech against Jews and Israel. For every group that is shut down, several more spring up. The Shoah group was reported to Facebook, but remains in place. According to Facebook's community standards, "Facebook removes hate speech, which includes content that directly attacks people based on their: race, ethnicity, national origin, religious affiliation, sexual orientation, sex, gender, or gender identity, or serious disabilities or diseases. Organizations and people dedicated to promoting hatred against these protected groups are not allowed a presence on Facebook."Shoah clearly directly attacks people based on race, ethnicity, and national origin, and yet it has been allowed to function on the social media platform for years. 2) Public figures' responsibility for their associationsAs evidenced by the Facebook friendship between Falk and Phoenix, the veracity of Falk's statements regarding his ignorance of the Shoah group are questionable. But even if his claims are true, it is an understatement to say that it is inappropriate and problematic for a United Nations representative, especially one whose task it is to present an educated, unbiased and responsible perspective on the Israeli-Palestinian conflict, to be a member of such a group, and it should be a priority for such a figure to control the associations of their social media accounts. Furthermore, while Falk is not currently employed by the UN, he joined (or was added) to the Shoah group in 2013, while he was still UN Special Rapporteur on Palestinian human rights."Hopefully, but not necessarily" he won't be in further hate groups is a discouraging response from a figure in his position. Considering the extremity of the content in these groups, thought leaders should necessarily not be part of them. Keeping up a responsible social media presence can require work, but if figures choose to have such a presence, they are responsible for their online goings-on.Falk's work has been deeply criticized by Israel and its allies for expressing extreme bias. In 2013, as the UN Special Rapporteur on Palestinian human rights, Falk issued a statement that Israel had genocidal intentions toward Palestinians. In response, then US state department spokeswoman Jen Paski said, "We do not support his mandate or his work, which has been one-sided and biased, nor do we believe he should continue to serve as independent UN rapporteur, and we reiterate our calls for him to step down from this role."She went on to say, “The Administration has repeatedly condemned in the strongest terms his despicable and deeply offensive comments, particularly his antisemitic blog postings, his endorsement of 9/11 conspiracy theories, and more recently, his deplorable statements with regard to the terrorist attacks in Boston,” said Psaki.