Terror attack at Temple Mount
Advertisement
Three terrorists opened fire on a group of policemen near Lions' Gate in Jerusalem’s Old City on Friday morning, killing two Israeli police officers and injuring two more before the attackers were killed by police.The slain officers are Hail Stawi, 30, from Maghar and Kamil Shanan, 22, from Hurfeish both in northern Israel. Officer Shanan was the son of former Israeli Druse Knesset member Shakib Shanan. He was recruited into the Israel Police’s Temple Mount unit in 2012. Officer Stawi leaves behind a newborn baby. The attackers were later identified by the Shin Bet as 29-year-old Muhammad Ahmad Mahmoud Jabarin, Muhammad Ahmed Fadel Jabarin 19, and Muhammad Hamed 'Abd al-Latif Jabarin, 19, from Umm el-Fahm in northern Israel.  The assailants fled to the Temple Mount where they were killed by police officers. Israel Police spokeswoman Luba Samri said guns were found in their possession.

The incident, which took place shorty after 7:00 a.m., is the second attack in  Jerusalem’s Old City within the past month and resulted in the closure of the Temple Mount to Muslim worshipers on Friday. Magen David Adom initially reported that three Israeli males in their 30s were injured, two of whom were in critical condition, and one who was lightly injured and fully conscious. The critically injured were transported to Hadassah University Medical Center, and the lightly wounded was taken to Sha'are Zedek Medical Center. Police are investigating how the assailants were able to get the weapons, which included a handgun, two Carlo Gustav rifles, and a knife, past strict security.
Weapons found at scene of attack on Templw Mount
Jerusalem Chief of Police Yoram Halevi has ordered the Temple mount closed and evacuated, and Friday prayers at the site were cancelled. All gates to the Old City of Jerusalem have been closed. Palestinian sources told Israeli Reshet Bet that Israeli police allegedly arrested a number of Wakf guards and confiscated their cell phones.  Prime Minister Benjamin Netanyahu ordered the closure of the Temple Mount for the day for security reasons. The area is being checked to insure there are no more weapons there. The Prime Minister's Office stressed that "the status quo will be preserved."Netanyahu also received updates from the head of the security agencies including the defense minister and the IDF chief-of-staff.Public Security Minister Gilad Erdan called the attack a “red line” which will “require us to examine the security arrangements on the Temple Mount and around it.”    US Ambassador to Israel David Friedman also responded and offered his condolences.

Shocked and horrified by the despicable attack today in Jerusalem. Terrorism must be condemned by all and defeated. We pray for the victims.

Hamas television station Al Aksa called the attack a 'heroic act,' but Hamas has not yet claimed responsibility for it. Israeli media reports that two of the three terrorists had posted a shared selfie on social media moments before the attack with the caption 'Tomorrow our smile will be sweeter.' 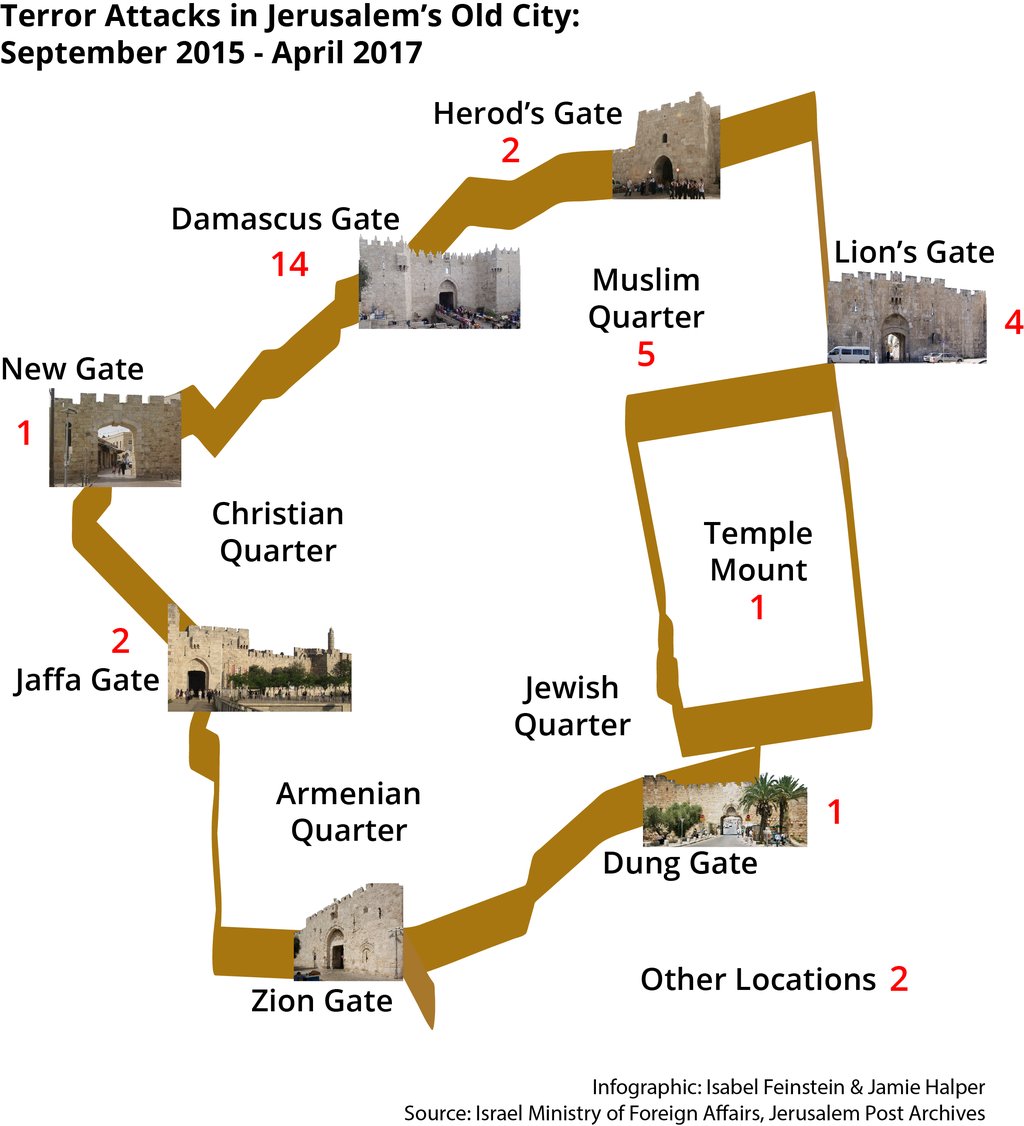 Thursday's attack comes nearly a month after border police officer St.-Sgt. Maj. Hadas Malka, 23, was stabbed to death by a Palestinian assailant next to Jerusalem's Damascus gate.   Eliyahu Kamisher contributed to this report