According to Goldstein, she created an algorithm based on composite mathematical equations for graphs which, when multiplied, created three dimensional designs for lacework. 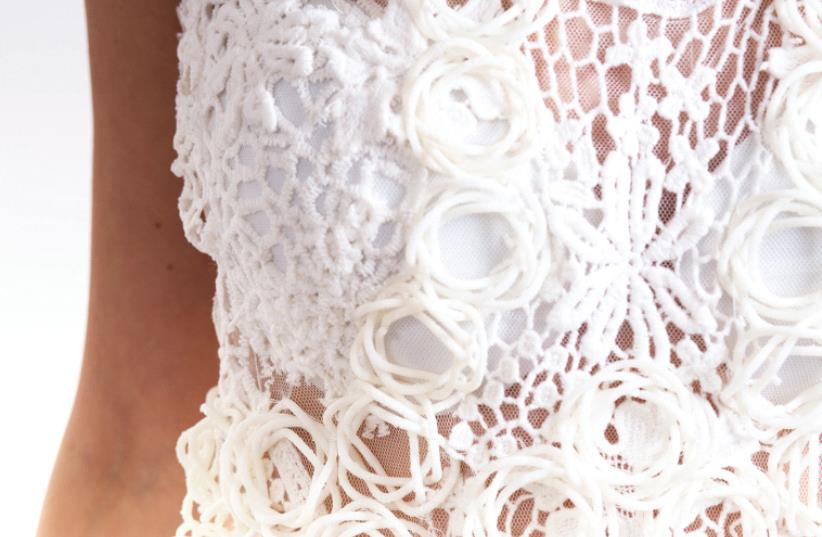 THE RESULT of Ganit Goldstein’s project is a synthetic lacework that is flexible, resistant to high temperatures and takes an average of 30 minutes to produce, without any human interference.
(photo credit: NITAI SHANAANI)
Advertisement
A cooperative project between a Bezalel Academy student and the Hebrew University’s Institute of Chemistry creates intricate lacework through technological means, blending art and science in a bid to reshape craft as we know it.The project was the brainchild of Ganit Goldstein, a jewelry and fashion student at the Bezalel Academy of Arts and Design in Jerusalem. As part of her second year project, Goldstein had to recreate a historical outfit and later provide her own contemporary interpretation.“I wanted my contemporary design to be a thematic opposite of the historical dress,” said Goldstein. “I decided to replace the Sisyphean manual lacework with 3D printing technology.”While Goldstein provided the designs and ideas, the synthetic lace production process was done with the help of Professor Shlomo Magdassi’s laboratory at the Hebrew University’s Casali Institute for Applied Chemistry and the 3D Functional and Printing Center at the Hebrew University Nanocenter.According to Goldstein, she created an algorithm based on composite mathematical equations for graphs which, when multiplied, created three dimensional designs for lacework.Then, with the help of Dr. Michael Layani and PhD candidate Ido Cooperstein, the right synthetic materials for the job were created and eventually printed.“Simply put, we are the chemicals men,” Dr. Layani explained. “Our research team and lab is responsible for creating and developing materials and substances which do not occur naturally. We then look where we can apply those substances in the real world through 3D printing.”According to Dr. Layani, the 3D Functional and Printing Center services cosmetic, pharmaceutical and fashion industries and is available to those outside of the Hebrew University.“Ganit came to us with her algorithm, and then together we figured out what kind of material was best for her needs and its real world applications."We then aided the process. In other such project we help from the very creation of the nanoparticles used for the material to the final stage of printing out the completed object,"  Dr. Layani recounted.The end result was a synthetic yet practical lacework, with patterns that change in accordance to numeric changes in the algorithm.The end result is flexible and resistant to high temperatures and takes an average of 30 minutes to produce, without any human interference.The lace was created using SolidWorks software and a MakerBot 3D printer.The speed and efficiency that accompany that production of a customized synthetic material stand in stark contrast to the slower art of lacework, and will potentially make something traditionally thought of as rare and high-end more readily available to the general public in the near future.“This project illustrates the tension between the traditional craft and contemporary technology,” Goldstein said.“In a few years’ time, it will be cheaper to print clothing and jewelry; when that happens, will the art of handcraft disappear?”