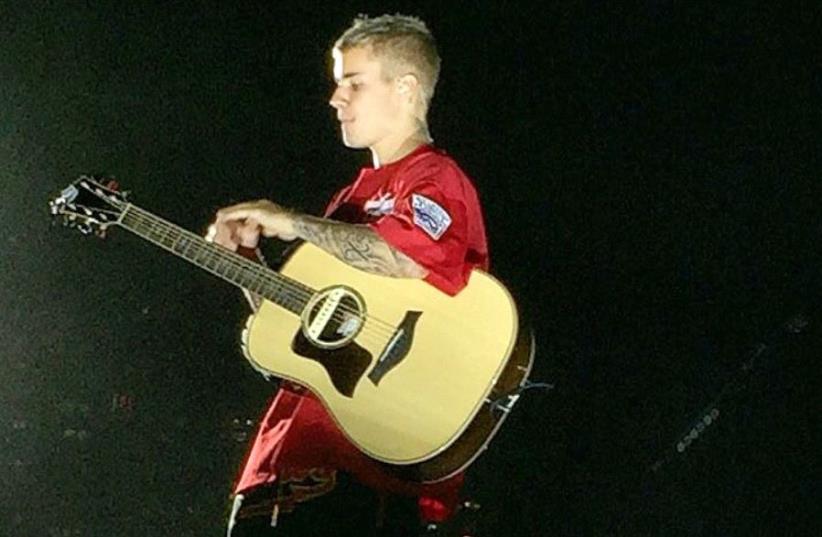 Justin Bieber performs in Tel Aviv
(photo credit: DAVID BRINN)
Advertisement
It may have been too late for Independence Day, but fireworks and shrieks of delight were in full bloom Wednesday night in Tel Aviv.Justin Bieber, who has inherited the title “king of pop” from Michael Jackson, enthralled some 50,000 mostly female teen fans at Yarkon Park on his second visit to Israel.Back in 2011, he was a teen himself, riding on the crest of a YouTube-propelled career as the latest pretty face. Now at the ripe age of 23, with an ambitious album out called Purpose, Bieber seems to be intent on demonstrating that there’s substance behind the looks.The 90-minute Tel Aviv extravaganza went a long way to making “beliebers” of any skeptics.
Justin Bieber in Tel Aviv"s Park Hayarkon
After a crowd-pleasing set by local bubblegum hip hop sensations Static and Ben El Tavori that got the crowd on its feet singing along to every word, Bieber took the stage to an audio-visual cacophony of lasers and crushing electronic sound. Wearing a standard hip hop sports jersey and oversized shorts, he was accompanied by a cadre of dancers and acrobats, along with some live musicians perched on a tier high above the stage.Gliding through some 25 choreographed songs, including his biggest hits, Bieber displayed star power, even from the outer reaches of the park via video screen. His music and voice have developed soulful qualities that at times crossed the line from entertainment to art.He brings to mind a young George Michael attempting to shake his lightweight Wham façade and reveal the emerging artist. Of course, there’s still 50,000 less discerning paying customers to please, hence the lasers, the regular rounds of fireworks (which received the biggest cheers of the night) and the acrobats.It’s a shame, because if his Tel Aviv show proved anything, it’s that Justin Bieber has the talent to shine without the spectacle.