Church of the Holy Sepulchre closes over municipality's tax demands

“We... are following with great concern the systematic campaign against the Churches and the Christian community in the Holy Land, in flagrant violation of the existing Status Quo.”

Jerusalem heads of churches in front of the Church of the Holy Sepulchre, which closed over municipality's tax demands on February 25th, 2018.
(photo credit: MAB-CTS)
Advertisement
Jerusalem church leaders on Sunday closed the Church of the Holy Sepulchre to protest announced plans by the city’s municipality earlier this month to collect property tax (arnona) from church-owned properties on which there are no houses of worship.The legislation initiated by MK Rachel Azaria (Kulanu) would expropriate the ownership of lands that were sold by the church to private buyers. 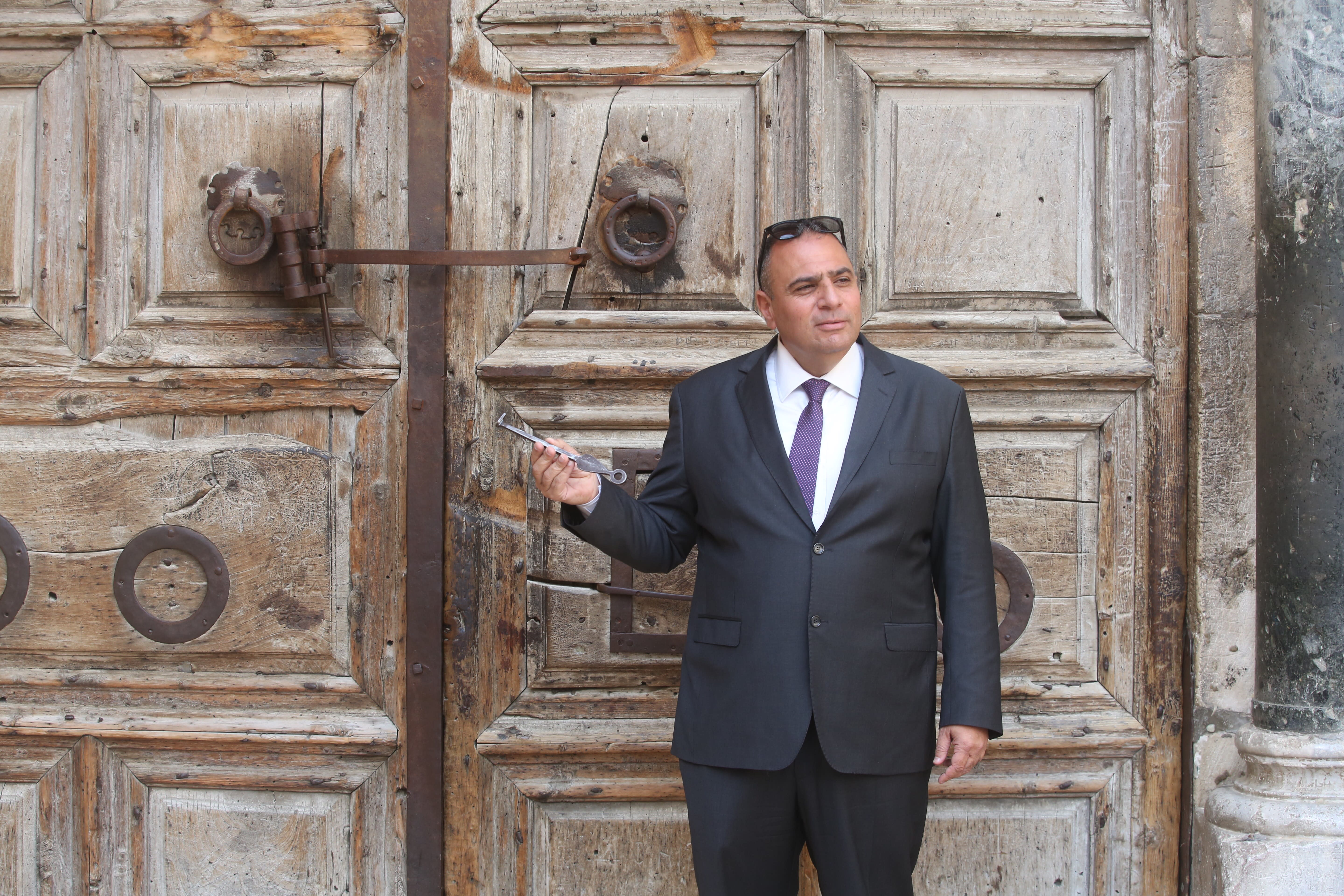 Adeeb Jawad, the custodian of the keys of the Church of the Holy Sepulchre (MARC ISRAEL SELLEM/THE JERUSALEM POST)
Two weeks ago, the municipality notified the Finance, Interior and Foreign ministries and the Prime Minister’s Office that it will start collecting a total of NIS 650 million in tax from 887 properties on which there are no houses of prayer. It said it has refrained from such tax collections thus far because the state did not allow it.Azaria’s bill was set to be voted upon in the Ministerial Committee for Legislation but was postponed a week.The church leaders dubbed the moves by Israeli authorities as a “systematic campaign of abuse against churches and Christians.”“We, the heads of churches in charge of the Holy Sepulchre and the status quo governing the various Christian holy sites in Jerusalem – the Greek Orthodox Patriarchate, the Custody of the Holy Land and the Armenian Patriarchate – are following with great concern the systematic campaign against the churches and the Christian community in the Holy Land, in flagrant violation of the existing status quo,” a statement issued Sunday read.The statement continued: “Recently, this systematic and offensive campaign has reached an unprecedented level as the Jerusalem municipality issued scandalous collection notices and orders of seizure of Church assets, properties and bank accounts for alleged debts of punitive municipal taxes – a step that is contrary to the historic position of the churches within the Holy City of Jerusalem and their relationship with the civil authorities. These actions breach existing agreements and international obligations which guarantee the rights and the privileges of the churches, in what seems as an attempt to weaken the Christian presence in Jerusalem.The greatest victims in this are those impoverished families who will go without food and housing, as well as the children who will be unable to attend school.“Therefore, and recalling the Statement of the Patriarchs and Heads of Local Churches in Jerusalem, dated February 14, 2018 and their previous statement of September 2017, as a measure of protest, we decided to take this unprecedented step of closure of the Church of the Holy Sepulchre. Together with all Heads of Churches in the Holy Land, we stand united, firm and resolute in protecting our rights and our properties.”Jerusalem Mayor Nir Barkat reiterated in response to the statement that churches and prayer houses are exempt from paying property taxes, “and it will stay this way.”“But does it make any sense for commercial area that has hotels and shops would be exempt from paying arnona just because they are owned by a church? For too many years the state did not allow the municipality to collect these debts of these commercial areas...I would not allow that the residents of Jerusalem would close this debt,” he said.Azaria, who proposed the bill that caused this reaction, said she “understands that the church is being pressured, but their land will remain theirs – no one wants to take it from them ever. My bill is about what happens when the rights are sold to a third party.”Azaria’s bill is intended to stop lands that are now under lease to churches from being sold to private investors. Such deals make the future uncertain for residents who living on church properties.“It cannot be that the owners can go door to door and threaten the residents that they’ll have to pay NIS 200,000 to NIS 500,000,” she said. “The low prices at which entire neighborhoods were sold shows that it was a speculative deal. In this situation, the Patriarchate is irrelevant, because its land sold to private builders.”Azaria, who used to Jerusalem deputy mayor, accused Barkat of “creating a crisis instead of solving it [and] creating an unnecessary diplomatic crisis.”The Kulanu MK said she plans to propose a bill exempting churches from municipal taxes, like other religious institutions.“The trick the mayor is pulling is ugly,” she said.The Church of the Holy Sepulchre is one of the holiest sites in Christianity. Some believers think Jesus rose from the dead at being entombed at the church following his crucifixion. The site is one of Israel’s most-visited locations, especially for Christian tourists and pilgrims. More than two million Christian tourists visited Israel in 2013, with 90% of them visiting the Church of the Holy Sepulchre, according to Israel’s Foreign Affairs Ministry.Adeeb Jawad Joudeh al-Husseini, the Church of the Holy Sepulchre keys custodian and the Holy Grave seal holder, told The Jerusalem Post next to the locked doors of the church that the move comes at a crucial time.“This is the time of Easter. Tens of thousands of people are coming here to the church,” he said.“Closing these gates is a severe blow to all of those who saved money to come here and spend the holiday here.”Husseini said he backs the church leaders’ move and called on authorities to rescind their plan to collect taxes.“Closing the doors of the church will eventually cause an economic damage to our country’s economy,” he said. “People are coming here from all over the world to visit the holy sites.” He said he did not know when the doors will reopen.