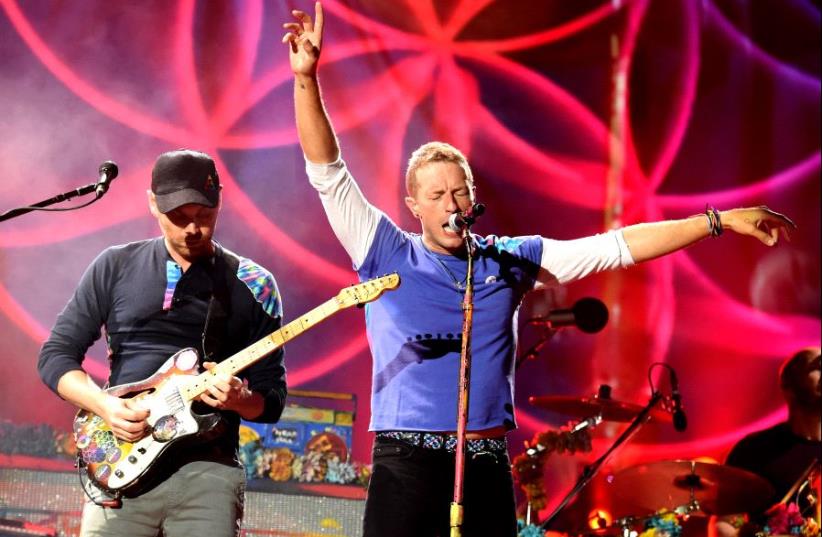 Musician Jonny Buckland (L) and singer Chris Martin of Coldplay perform at the Rose Bowl on August 20, 2016 in Pasadena, California
(photo credit: KEVIN WINTER / GETTY IMAGES NORTH AMERICA / AFP)
Advertisement
Chris Martin, the front man of the band Coldplay, known for such hits as “Speed of Sound,” visited a Jewish-Arab school in Jaffa to which he is a donor – but he conducted his entire trip this week more at the speed of light than sound.Martin almost managed to avoid the press completely on this blink-and-it’s-over visit, but Rinat Zoarets, a reporter from Guy Pines’s television program Good Evening with Guy Pines, caught up with him. The singer, wearing a hat and dressed in black, was apparently traveling in the back of an SUV to keep a low profile and didn’t seem thrilled when Zoarets introduced herself, telling her he didn’t want to be filmed. Showing Israeli grit, Zoarets got the rock star to agree to take a selfie with her.

Martin has visited Israel in the past in an attempt to set up a Coldplay concert that would be accessible to both Israelis and Palestinians. On those visits, he got to know the directors of the Bustan Yafa organization, which funds several preschools and other programs for children from all religions, according to Pines. He had hoped on this trip to discreetly visit these programs.In a meeting at the school, someone managed to take a short video of Martin surreptitiously, as he somewhat ironically praised social media.In the clip, he says, “The beautiful thing about social media is it’s easier to see that, oh, this kid in China likes the same shoes that I do. There is a lot of good stuff.”Pines’s show reported that Martin was set to tour the West Bank, spend the night in Jerusalem and leave Israel on July 9.Just last week, Martin performed a duet with Kylie Minogue to an enthusiastic crowd at the Glastonbury Festival.Reportedly, Coldplay has touring commitments for the next two years, so it doesn’t seem likely the band will play the concert he dreamed of here anytime soon.Martin is divorced from actress/New Age website mogul Gwyneth Paltrow. They have two children together, Apple and Moses.