A voice for all seasons 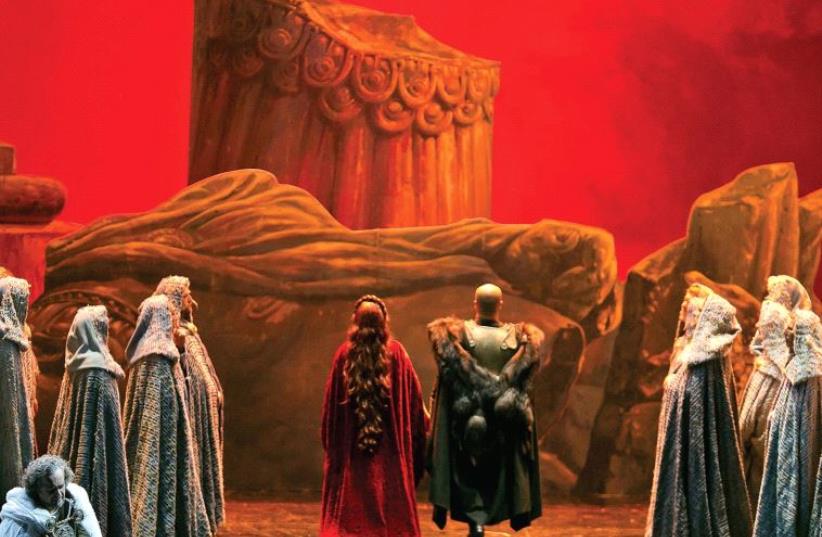 Israeli tenor Guy Mannheim performs in Bellini’s opera ‘Norma’
(photo credit: PR)
Advertisement
Guy Mannheim says he is a fan of dramatic works, which is a pretty good thing considering he makes a living as an opera singer.The 38-year-old Israeli tenor will participate in the Israeli Opera’s upcoming production of Vincenzo Bellini’s Norma, the company’s 2016- 17 season opener, which kicks off on November 30 and will run until December 17. Mannheim, who will play the role of Flavio, says he is delighted to have the opportunity to reprise a part he performed with the Israeli Opera five years ago.“Norma is a very emotional and dramatic work from the bel canto genre,” he notes. “All the emotions come gushing out with a heartbreaking drama, like in many other operas.”Mannheim says he expects to slip seamlessly into the role, which he has performed on two previous occasions.He notes that there is more to the character than his position in the storyline infers.“Flavio is the confidante of Pollione.It is not one of the leading the roles, but what I like about him is that he is the one who spells out the predicament to all,” he says.And quite a situation it is, too.Norma is set in Gaul during the Roman occupation. An ancient kingdom that covered much of Western Europe, Gaul included all of what is now France. Oroveso, the Arch-Druid, aspires to lead a Gallic rebellion against the colonial forces, but he and his cohorts are waiting for his daughter, the Druid High Priestess Norma, to give the green light. The political waters, however, are furthered muddied by an illicit liaison between Norma and Pollione, who is the Roman proconsul. Matters are even further complicated by the fact that Norma has given birth to two children fathered by Pollione. The offspring have been cared for by the priestess’s right-hand woman Clotilde. And if that weren’t enough, Pollione has fallen for a newer model, a novice priestess named Adalgisa.With that almost impossibly intricate web of philandering and political shenanigans, it is good to have at least one trustworthy figure in the pack.“Flavio is a sort of goody goody. He doesn’t get into emotions and that sort of thing. He plays things straight,” says Mannheim.When I suggest that Mannheim might be something of a Flavio character himself, the tenor laughs and says that his more mischievous side will come to the fore in his next berth in an Israeli Opera production.“I will be in Lucia di Lammermoor [a three-act tragic opera by Donizetti], and I’ll play Normanno. He makes lots of trouble for everyone, then gets out.Flavio at least doesn’t do that, but he gets everything out into the open, and the others have to deal with it,” he says.Mannheim says he is perfectly happy playing the goodie or the baddie.“I have performed over 300 roles until now and have liked every one of them. I get out of each of them the complexity of the character, even if they appear to be simple and uncomplicated characters,” he says.The latter don’t actually exist.“I have a background in theater, and I can tell you that every person and every part has its complexities,” he explains.Even so, some parts require more effort than others to unearth the full range of emotions and attributes with which to work.“As an artist, you look for the complexity even if there isn’t any there,” he says.The same does not necessarily apply to the texts Mannheim has to deliver.“Sometimes you see a line and you think it doesn’t have any significance, that it doesn’t really add anything to the work. If you don’t see a reason to say a line or to sing a line, then leave it out. You have some freedom in that regard,” he adds.Mannheim says his acting background imbues his operatic work with significant added value.“I bring all my theatrical training into my operatic performances,” he says.As a kid, he took part in all kinds of drama activities, furthered his thespian endeavor at the Thelma Yellin High School of the Arts, and he took degree studies in theater at Tel Aviv University.It was at the latter institution that his career die was finally cast.“I met [opera singer and educator] Prof. Mira Zakai at a Medieval Drama class who worked with us. She directed me to the world of opera, where I can use all my operatic training and all my theatrical skills,” he says.In fact, Mannheim spreads his vocal talents across several disciplines and has taken part in a number of high-profile non-operatic projects, such as Shlomit Aharon and the Three Tenors, and performances of nuggets from the Israeli Songbook.“I really enjoy singing the Israeli classics,” says Mannheim, adding that it involves something of a delicate balancing act.“A colleague of mine once asked me how I manage to sound non-operatic when I sing in Hebrew. Somehow I manage to find the middle ground between my opera, bel canto, voice and a more natural or spoken voice.Last year I had the main role in [a musical production of] Agnon’s The Peddler and the Lady, which was in Hebrew – actually, in Agnon’s Hebrew [Nobel Prize laureate S.Y. Agnon had certain Hebrew expressions and words of his own]. It is difficult to sing in Hebrew, but you always find a way,” he says.Mannheim will have less of a phonetic challenge singing his part of Flavio in the opera’s original language.‘Norma’ will be performed from November 30 to December 17 at the Opera House in Tel Aviv. For tickets and more information: (03) 692-7777 and www.israel-opera.co.il