Bon Jovi's band members are in their 50s, but seem to have boundless energy as they face an enthusiastic crowd in Tel Aviv. 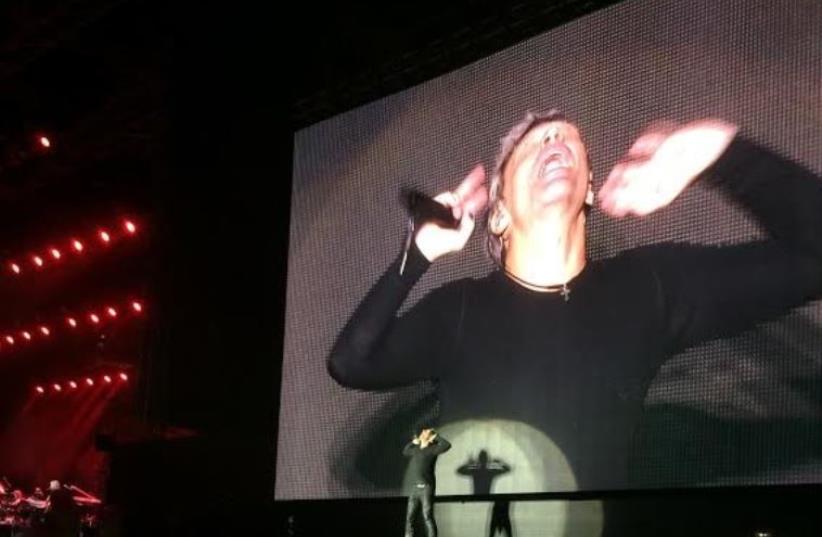 Jon Bon Jovi performs in Tel Aviv
(photo credit: Lahav Harkov)
Advertisement
Is there a more dramatic way to start a concert than with “Shot through the heart, and you’re to blame?” The tens of thousands of Bon Jovi fans gathered in Tel Aviv’s Yarkon Park on Saturday night were immediately pumped up, and gave him the only acceptable response: “You give love a bad name!” The concert in Tel Aviv was Bon Jovi’s first-ever in Israel, and the veteran band regaled an enthralled audience with hits old and new.Band members though in their 50s seemed to have boundless energy. Front man Jon Bon Jovi constantly flashed a trademark megawatt smile that has kept him a heartthrob for decades, as he ran around the stage, gyrating and waving his arms, and not tiring for a second during the two-hour set on a humid night.The crowd spanned generations, all jumping, waving their hands and singing every single word to “Runaway,” “Bad Medicine,” “Have A Nice Day” and more.Jon Bon Jovi said the crowd was going on a trip on a time machine to the ’80s, and while his close-cropped hair kind of ruined the illusion, he didn’t have to sing a word of the first verse of “Wanted Dead or Alive” – the audience carried it for him as if the Slippery When Wet album was still topping the charts.The same went for “It’s My Life,” the 2000 hit that made it cool for millennials (before they were called that) to like their older siblings’ or even their parents’ favorite ‘80s rock band.

The band came to Israel despite pressure from BDS activists and another one of Roger Waters’s mendacious, and, let’s face it, tedious by now, open letters calling for an artists’ boycott.In an interview before the concert with Yediot Aharonot, Jon Bon Jovi said Waters’ campaign “doesn’t interest me...I’m coming to Israel, and I’m excited to come. “We’re finally here. It took me long enough,” he said at the concert.The front man introduced Jewish keyboardist David Bryan – aka David Bryan Rashbaum, who once told The Forward that he blows the shofar at his synagogue on Rosh Hashana.Forty-five years after sending him to piano lessons, Rashbaum’s dad would be so proud that he was playing in Israel, Bon Jovi told the crowd. Then, the band played “Who Says You Can’t Go Home.”Bon Jovi energized the crowd by dedicating two empowering songs to Israel on a difficult night when a terrorist attack claimed two lives in Jerusalem.The first was, “We Don’t Run,” which he said “should be the fight song for Tel Aviv.”The tune features lyrics like “We don’t run, I’m standing my ground, We don’t run, And we don’t back down.”Then the band played, “It’s My Life” with: “Better stand tall when they’re calling you out, Don’t bend, don’t break, baby, don’t back down.”“Keep the Faith” seemed like the perfect song for a night of such mixed emotions for Bon Jovi’s Israeli fans.The concert ended with “Livin’ on a Prayer” and a promise by Jon Bon Jovi “I’ll come here any time you want,” exactly what the crowd needed to hear.