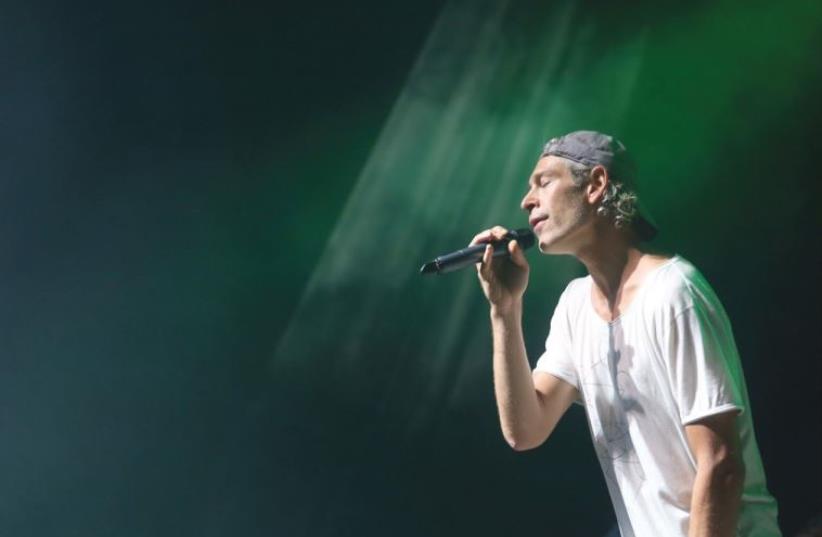 AMID AN atmosphere of high tension, American rapper Matisyahu delighted many local fans during his performance at Sultan’s Pool in Jerusalem.
(photo credit: MARC ISRAEL SELLEM)
Advertisement
It’d be just a little too cliche to say the highlight of Matisyahu’s Saturday night performance in Jerusalem – at the height of terrorist attacks and tension in Israel – was his closing performance of his hit “One Day.”“All my life I’ve been waiting for/ I’ve been praying for/ For the people to say/ That we don’t wanna fight no more/ There will be no more wars/ And our children will play.”As the clock struck midnight, families and children from One Family, the organization that supports victims of terrorism, joined the New York rapper on stage. It was definitely a moving and important moment in closing the show.But a more moment more aptly demonstrating the solidarity of the Israeli people, and its defiance in attending a concert outside Jerusalem’s Old City walls after two stabbings had occurred that day, before the first bomb of these clashes exploded Sunday morning, was Ethiopian- Israeli hip-hop duo Café Shachor Hazak, joined by Israeli rapper Nechi Nech, opening the show with their summer hit “Yiye Beseder” (It Will Be Alright).The song reached the height of its popularity as protests by Ethiopian-Israelis against police discrimination and violence erupted into heated confrontations. The song, with its upbeat melody and catchy chorus, capitalized on a very Israeli attitude.“I know everything will be alright...We won’t give up, and raise our heads high.”Not to say that the former hassidic rapper didn’t deliver. Saturday night’s concert was an encore of his triumphant return to Jerusalem in September.At that show, he was capitalizing on victory over Boycott, Divestment and Sanctions protesters who tried to get his show at a Spanish reggae festival canceled. The American rapper was asked by concert organizers to state his politics on the Israeli-Palestinian conflict and when he refused, he was dropped from the lineup.After pressure, he was put back on the performance list and defiantly sang “Jerusalem” to a crowd of heckling pro-Palestinian protesters. At his performance at the Tower of David he again made a statement, performing on stage with Israeli artist Sha’anan Street from the popular group Hadag Nahash and Palestinian rapper Sez.Jerusalem Mayor Nir Barkat welcomed Saturday night’s crowd. To the few thousand squished into the Sultan’s Pool venue, the mayor took the opportunity to thank the police, security services and emergency medical response teams for their work during this difficult time.“Everyone who came here today and is maintaining their regular routine is a partner in fighting terror,” Barkat said.For three hazy hours, the sound of sirens was drowned out by powerful bass beats and popping rhythms.Smart phones were rendered useless as networks jammed; breaking news updates of rockets and stabbings couldn’t be read.Matisyahu opened the show with his 2005 breakout hit “King Without A Crown,” followed by a mish-mash of songs from his five albums, mixing his performance with improvised beatboxing, collaborations with Café Shachor Hazak and Nechi Nech and, triumphantly, with Israeli golden boy Idan Raichel.“We appreciate you coming, these are bad days,” Raichel stressed during the performance.So bad, in fact, that guns, usually forbidden at such events, were allowed in by security, following ID and license inspections. A few days earlier, Mayor Barkat had urged civilians with gun licenses to carry their weapons. Vigilant citizens had their handguns on their hips and soldiers on leave jumped along to the music with their M-16s slung over their back.“Jerusalem, I’m home,” Matisyahu said to the crowd and continued to sing his ode to the city, much to the crowd’s delight.