Art: From the mysterious to the macabre

‘In Her Footsteps,’ a group exhibition of female artists, is on display at the Herzliya Museum of Contemporary Art. 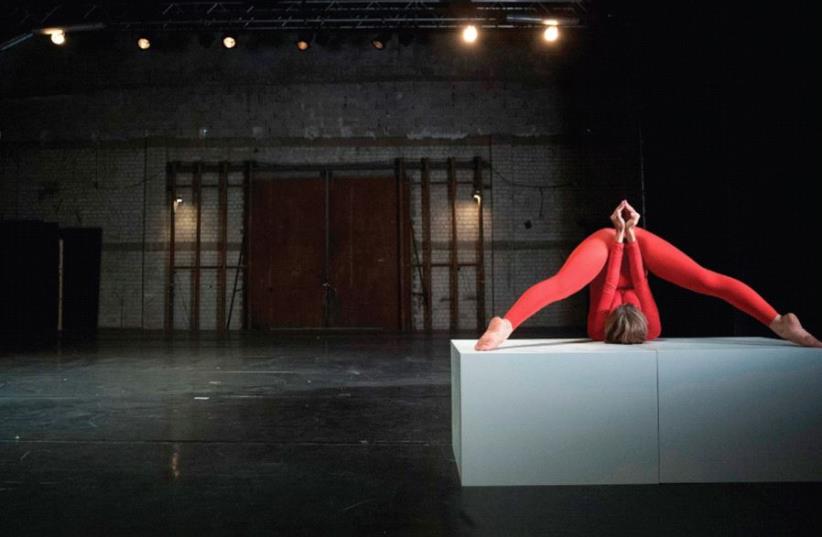 Hilla Ben Ari's ‘Rethinking Broken Lines’
(photo credit: Courtesy)
Advertisement
Virginia Woolf, the morbid and immensely talented author of peculiar and moving oeuvres that marked a significant turning point in 20th-century literature (such as Mrs. Dalloway, To the Lighthouse and Orlando), is pictured wearing her familiar sanguine expression and a floor-length, checkered blue dress.A closer examination of the photo reveals that a black-and white portrait of the English writer has been manipulated and pasted onto the body of the wearer of the dress.Alongside Woolf are frames depicting dozens of other men and women from all walks of life and almost every sector of the divided and conflict-ridden Israeli society. They seem to have nothing in common except for the not particularly fashionable dress they are all mysteriously wearing.Placed side by side are a mischievously smiling Ethiopian woman, a thin-lipped, somber-looking Russian immigrant dressed in a guard’s uniform, Israeli politicians, beautiful young women and a stunning middle-aged woman whose strong features, short haircut, dark sunglasses and austere demeanor make for the most riveting portrait of all of those displayed in a back room of the Herzliya Museum of Contemporary Art.The latter is Israeli artist Michal Heiman, who invites museum visitors to join her on an emotionally intense and unconventional quest to trace the troubled personal stories of the women who were hospitalized at the Springfield Hospital, a British mental institution that operated in the UK at the beginning of the 20th century.Through the process of sewing the dress (which is a replica of the dresses worn by the institution’s patients), giving it to other women to wear and photographing them in the act, Heiman seeks to “create a community of women” who would symbolically reclaim the troubled fates of Springfield’s inmates, who were often hospitalized by force and against their wishes at the hands of their loved ones.The idea for the project, titled AP – Artist Proof, Asylum (The Dress 1855-2017), occurred to Heiman when she came across the book Portraits of the Insane: The Case of Dr. Diamond, which told the story of the prominent psychiatrist who was a senior staffer at the hospital and often photographed patients.One of the photographs triggered a strong reaction in the artist, who thought she recognized a strong likeness between one patient and herself when she was a teenager.When stripped down of its multiple, ambitious and at times overwhelming elements, Heiman’s harrowing attempt to define and rediscover the anonymous patients of the Springfield Hospital reads like a genuine desire to bring to the surface the troubled aspects of her identity and discuss or question her own psyche.The impressive work seems the most consolidated among the eight projects that are now showcased at the Herzliya Museum as part of a group exhibition of female artists titled “In Her Footsteps.”In a world where most people still shy away from defining themselves as feminists, the Herzliya Museum’s chief curator Aya Lurie has made a brave if slightly trendy decision by giving the feminine voice the limelight.Instead of punishing or reining it in, the exhibition seems to fuel the “female fiend.”Another dark journey pursuing a forgotten woman is photographer Ronit Porat’s somewhat macabre work called Mr. Ulbrich and Miss Neumann. In a series of collages displaying close-ups of items that could have been picked up at a crime scene or, alternatively, between the pages of a Victorian novel, Porat brings to life the sensational murder story of Mr. Ulbrich.Ulbrich was a clockmaker and amateur photographer who worked in Berlin in the colorful era of the Weimar Republic before the Second World War. He was in the habit of photographing underage girls in suggestive, provocative poses that channeled sadomasochistic sexual trysts. One of his models, 16 year-old Ms.Neumann, decided to exact revenge on him and in a robbery attempt gone wrong, she murdered Ulbrich with the aid of her boyfriend.Through her collages, Porat creates a densely detailed and terrifying narrative of female sexuality, altering the rocky balance between the master in control and his fetishistic object of desire.A couple of rooms down the hallway, award-winning video artist Hilla Ben-Ari’s “Rethinking Broken Lines” pays tribute to choreographer Heda Oren, who died in 2008. In a series of short and heart-wrenching videos, Ben- Ari captures dancers visibly struggling to hold complicated poses, shaking and panting but holding their stoic postures despite the pain.The most minimalistic project in the exhibition that best illustrates the overall theme of personal journeys is Ohio-born, Tel Avivbased artist Hinda Weiss’s video work. Her project, titled After the Nubian Ibex, follows Weiss, who documented herself wandering aimlessly in Mitzpe Ramon, seeking to escape the Tel Aviv scene and perhaps “find herself.”In one of the strongest frames of Weiss’s video installments, she is sitting and looking at the view from atop a high hill that must have taken her a long time to climb. Weiss doesn’t express any pride or joy at accomplishing this feat and does not act like someone who has conquered a piece of land, the way a man might have.She just sits there tired, pensively looking around. Then several ibexes approach. They form a circle around her, punctuating the silence.‘In Her Footsteps’ is on display at the Herzliya Museum of Contemporary Art until April 22.