Even in Israel, Frank Sinatra always did it his way 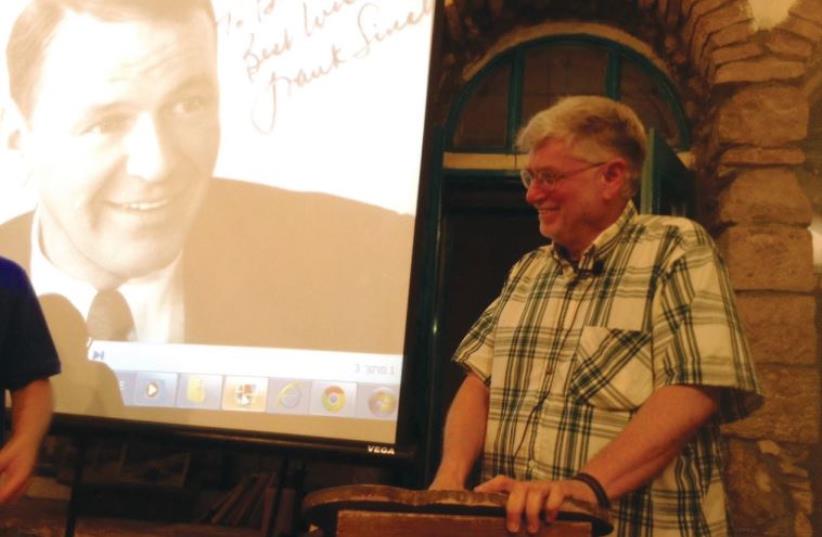 Professor Shalom Goldman on Frank Sinatra’s connection with Israel
(photo credit: ESTER ECKHAUS)
Advertisement
To mark what would have been Frank Sinatra’s centennial year, Duke University Professor Shalom Goldman explores Sinatra’s deep connection to Israel. Goldman gave a talk last month on the subject at Jerusalem’s T’mol Shilshom, accompanied by covers of Sinatra songs performed by singer/songwriter Emmy Raviv. Goldman sat down with The Jerusalem Post to discuss the connection between Israel and American popular culture.Was Frank Sinatra a Zionist? I’d have to say yes, in the sense that he supported the idea of a Jewish state even before there was one. Was he a Zionist in the sense that he devoted his career and all of his money to Israel? No, he wasn’t. I’ve heard him described as a Catholic Zionist, although I wouldn’t call him devout, he was a serious Catholic. One of the points I make in my talk is that he was a liberal of his time. For a liberal in the ‘40s, ‘50s, and ‘60s, Zionism was part of a worldview that had to do with taking care of persecuted groups of people. He was also for Black Americans and Puerto Rican rights.For him, it was all part of a package. That package isn’t around anymore; it’s an old package.Can you talk about Sinatra’s various trips to Israel throughout his life? In 1962, he was a guest of the government and army at the Yom Ha’atzmaut celebrations, and gave a concert at Tel Nof (air force base) for soldiers. In 1964, he visited Israel to dedicate a youth center in Nazareth. In 1975, he gave a concert at Binyanei Hauma [Jerusalem’s International Convention Center], which was recorded as an album, titled, Sinatra: the Jerusalem Concert. Finally, in 1978, he returned to Jerusalem to dedicate the Frank Sinatra Center at the Mount Scopus campus of Hebrew University.How did you become interested in Sinatra’s connection to Israel? My interest is not solely Frank Sinatra, but American popular culture as it relates to Israel. I’m writing a book on the subject actually. I did a talk at T’mol Shilshom a few years back on Johnny Cash, and before that Bob Dylan. I’ve done many of these events. My previous book was about Christian Zionists.Now, I want to get into how American culture sees Israel. There are many books on diplomacy in Israel and the military in Israel, but nobody’s written a book about culture in Israel. America is 98 percent non-Jewish, and the idea of how that culture relates to Israel fascinates me. Because I’ve been focusing on these popular figures, lots of other people are interested. So that’s why I’m doing this.My mom’s side of the family is Italian, so they were always playing Sinatra’s music, but I had no idea that he had a connection to Israel. Is that a reaction that you’ve been getting a lot? I think it’s a side of him that not many people know about. It’s amazing how passionate he was about Israel. The more I think of it, he really was a Zionist! Can you share some of your talking points? The liberalism connection is one of my main talking points. How, after World War II, the reality and the perception especially in the United States was affected by the UN....The spirit of the UN, which was formed after the war by the Allies, was that it was the job of the “winners” of the war to help the “losers.” But not the losing side, [rather] the people who were persecuted. The Marshall Plan is also connected to it; the idea of helping Europe. I often need to remind people that the concern about Israel is part of this larger package. For American Jews, it’s not a larger package, it’s very directed at the plight of the Jews. But for American Christians, it’s a larger picture. I think that’s my main talking point. That’s also the point of my book, which is untitled as of now, but the subtitle is “A Cultural History of the American/Israeli Relationship.”So you did the two talks at T’mol Shilshom. Are you speaking anywhere else? I was very honored to get a call from Melabev, which is an institution that helps Alzheimer’s patients. I gave a talk at Melabev about Frank Sinatra. Someone from Melabev got in touch with me and said that the group of highest-functioning patients would really enjoy it. Lots of them knew the songs, and they seemed to really love it. At the end, this fellow led everybody in singing three Sinatra songs, which was a lot of fun. Most of them were New Yorkers, so we sang “New York, New York” and “My Way.”How did the musical element get introduced in terms of Emmy Raviv for the T’mol Shilshom talks? I had some wonderful musicians for the past talks, and since there are often musicians performing here, it made sense. I think it adds a lot. Otherwise, I’m just another college professor talking. There’s nothing like music to enchant an audience.