Some of Israel’s leading literary and political figures worked as journalists for the daily. 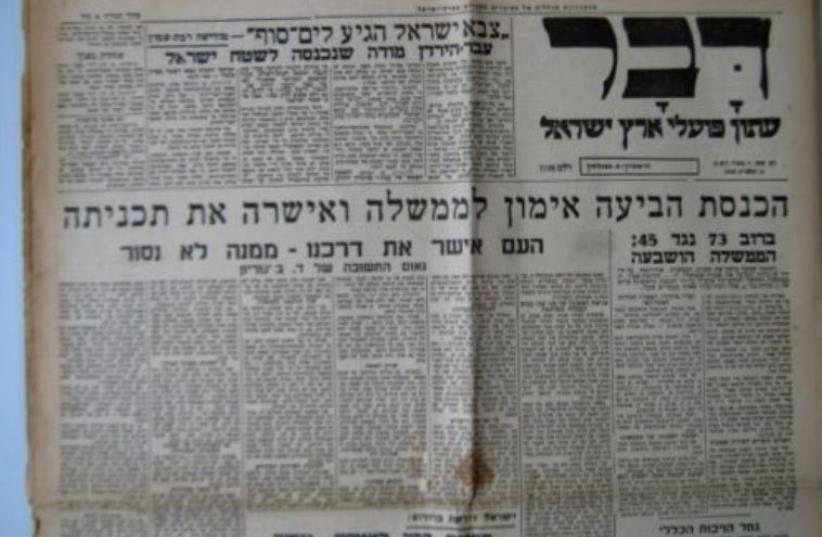 Davar newspaper
(photo credit: EBAY)
Advertisement
Even old socialists have a second act.The Histadrut labor federation – in an attempt to convey its message of solidarity, equality and social justice – has revived its long-defunct newspaper Davar and re-launched it as an online publication. In addition to news, the site will have worker- based features as well as general interest stories.Established in June 1925 as the daily newspaper of the Histadrut, with Berl Katznelson as its founding editor, Davar was the paper of choice among Israeli workers. It also had several subsidiary publications for women and children.At the end of its first quarter century of existence, it had close to 400 employees.When Katznelson died in 1944, he was succeeded by Zalman Shazar, who later became the third president of Israel.For several years, Davar and The Jerusalem Post were sister publications.Shazar was succeeded by Hanna Zemer, a Holocaust survivor who was the first female editor of the newspaper, which had become the leading Hebrew daily.She had been a political correspondent, and during her 20 years at the helm of the publication – until 1990 – she appointed Israel’s first woman print media military correspondent, Tali-Lipkin Shahak (then Tali Zelinger), whose father, Azariah Rapoport, was Israel’s first ever military correspondent.Some of Israel’s leading literary and political figures worked as journalists for the daily. Among them were Shmuel Yosef Agnon, Israel’s first Nobel Prize laureate, Natan Alterman, Leah Goldberg, Uri Zvi Greenberg, Dahn Ben-Amotz, Israel Prize laureate Haim Gouri, Amnon Dankner and Yossi Beilin.Following Zemer’s retirement, it took two men to fill her shoes: Yoram Peri and Daniel Bloch.By then the paper had fallen on hard times financially, and Peri and Bloch did not stay in their respective posts for very long.The last editor of the newspaper before it closed in 1996 was Ron Ben-Ishai, a respected military correspondent.During his tenure, the paper’s name was changed to Davar Rishon, a word play meaning “First Thing.”