When Jewish, Chilean-born artist Mauricio Avayu first thought of bringing the Torah to life by painting its stories on canvas, he saw a very daunting task. 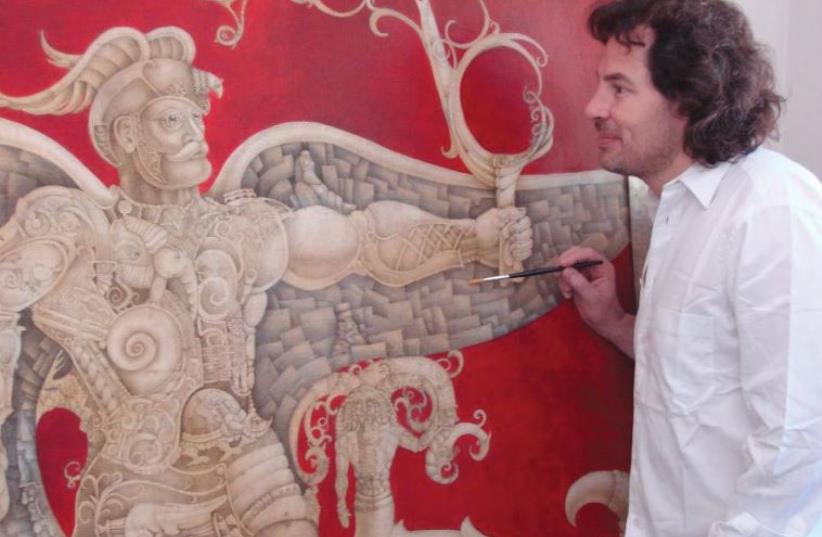 Chilean artist Mauricio Avayu, seen here with one of his murals
(photo credit: Courtesy)
Advertisement
Creating a Torah scroll typically takes several months. Each letter is carefully inked onto cured, tanned parchment using a feather quill. The result is a demonstration of outstanding artistry, skill and workmanship.When Jewish, Chilean-born artist Mauricio Avayu first thought of bringing the Torah to life by painting its stories on canvas, he saw a very daunting task.“At first I wanted to do the whole Torah, but as I started studying for the project I realized that would be impossible,” the artist concedes while sitting in front of a part of the mural in which Joseph is interpreting Pharaoh’s dream.Avayu began the project in late 2013 and has only completed the section of the mural for Genesis, the first of the five books that make up the Torah.When completed, the mural will be 2 m. by 50 m. Each book of the Torah will be portrayed through eight paintings; it will include 40 paintings that will sequentially depict the events of the Torah. Each painting will be 2 m. by 1.25 m., the same mathematical proportion as the Kodesh Hakedoshim, the Holy of Holies, where God dwelt in the Temple.Like the diligent scribe, Avayu constantly refers back to the Torah before moving forward with his work. His process involves reading the Torah, Midrash and Rashi several times – only then do the images start coming into his head, he says.“The hard part compared to what I’ve done before is that here I’m not totally free,” Avayu says. “With other projects, I would have the inspiration and the tools and I would start painting. With this project, I can’t do that. I have to start studying, and only after that can I start my work.”He has approached rabbis for advice on whether to include certain facets in the work and has sat with Torah scribes who have taught him how to properly print the font of the Torah onto his own parchment.Crafting the mural has been a remarkable learning experience for the artist, who is no stranger to Judaic studies or drawing the stories. He began attending Jewish day school in Ecuador at age 10 and drew pictures depicting characters and events from the Bible for the school yearbook.Michelangelo’s Sistine Chapel was a huge inspiration for the project, explains Avayu. It’s one of the few representations of the Torah that have been created, and it doesn’t go past Genesis.The completed section of the mural depicts the day of creation, the dispute between Cain and Abel, Noah’s ark, Abraham, the Binding of Isaac, Isaac’s blessing of Jacob, Joseph’s interpretation of Pharaoh’s dream and the symbols for each of the 12 tribes. Each event is painted on a separate canvas that connects side by side, weaving the narrative of the Torah together through images.“My dream is to have the whole thing on exhibit as a circle around the Dead Sea Scrolls,” says Avayu.So far, the work has only been on exhibit in Chile. It was inaugurated on the first night of Hanukka in December last year in the home of the president of Chile. More than 1,000 people were present. It will be on exhibit until November 2 in Iquique, Chile.Avayu, who hopes to bring the project to Israel when it is completed, expects to spend another five to seven years working on it.Although Avayu is working outside of Israel, he has encapsulated much of the essence of Judaism and the Holy Land.The mural’s color palette is reminiscent of the stone walls and tiles of the Old City. Each character and image is identifiable.The Hebrew letters on the canvases capture the font style in a traditional Torah scroll.As part of an effort to combat anti-Semitism, Avayu has been working toward exhibiting the mural for non-Jews. He believes that his work can help non-Jews understand the Jewish people.“Non-Jews have thanked me because the work shows information that they didn’t have access to,” Avayu says. “This puts us on common ground; it shows that we also have similar views.”