Color to Life aims to bring the stories behind the pictures back to life, through their restoration. 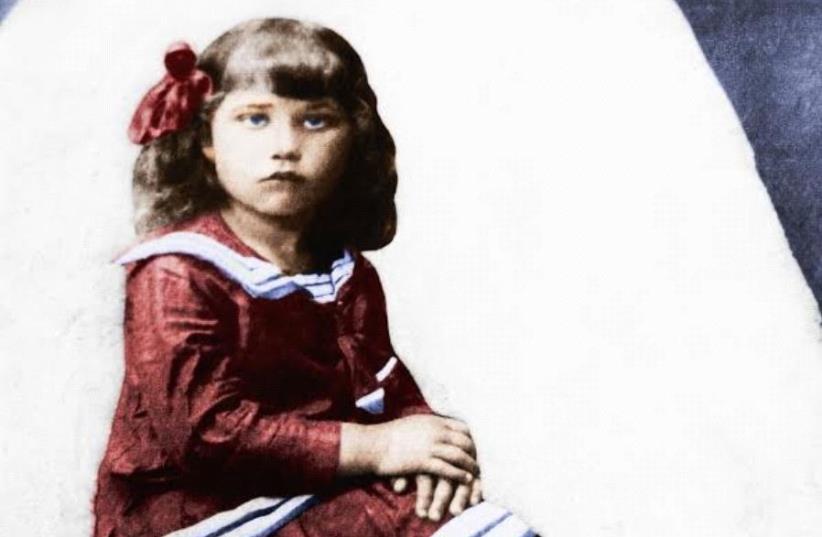 Holocaust survivor Anna Medved has only one photograph from her childhood - an image of herself as a seven-year-old girl in pre-WWII Ukraine, in 1933
(photo credit: Courtesy)
Advertisement
Holocaust survivor Anna Medved has only one photograph from her childhood – an image of herself as a sevenyear- old girl in pre-World War II Ukraine, in 1933.Upon discovering that this old black-and-white picture is all that remains of Anna’s past, her granddaughter Michal Medved was struck by the fragility of the preservation of historical remnants, which could easily be lost or forgotten.A recent visit to Belarus and Poland by the Cognitive Science and Psychology student, together with other Ben-Gurion University of the Negev students, instilled in Michal a newfound sense of urgency to cherish and safeguard memories of her family history, inspiring the idea for a project to digitize old family photographs.Michal and fellow student Dima Boriskovsky decided to embrace modern technology as a means to immortalize memories of the past. The initiative was realized through a collaboration between Ben-Gurion University, Hillel Israel and the Genesis Philanthropy Group, under the title “Color to Life” – with the aim of bringing the stories behind the pictures back to life through their restoration.Anna’s picture captured a happy moment of her childhood, before WWII broke out.During the war, Anna lived in a ghetto in Zhitomir. She and her sister escaped death when they left the ghetto and walked dozens of kilometers to bring food for their family, only to hear the following day of a pogrom in the ghetto during which thousands of Jews were killed.Among them were their parents. Anna’s brother was also killed after being sent to the Red Army.Michal said her grandmother’s happy memories “almost disappeared and were replaced by the suffering and pain which she experienced,” inspiring her desire to immortalize the picture as a symbol of Anna’s happy childhood years. Quoting French playwright Alfred Capus, she said: “The best memories are those which we have forgotten.”The picture of Anna was one of 11 selected to be displayed in color at the Haatika coffee shop in Beersheba, which hosts various exhibitions throughout the year.The old, mostly low-quality black-and-white photos were displayed side-by-side with the new, high-quality color versions and texts of the stories behind the images.In addition, 50 pictures, slides and films were selected for digitization.A picture submitted by mechanical engineering student Assaf Alon was also selected for the exhibition. He only discovered the photo of his grandfather Arie Eichenbaum when the latter died two months ago.Born in Warsaw, Eichenbaum fled eastward to Russia in September 1939 together with his sister and mother, finding refuge in a corn farm in Siberia, where they remained until the end of the war. His father was recruited to the Red Army and survived, and they all returned to Poland after the war, only to discover that the rest of their family had been killed at the Treblinka extermination camp and in the Warsaw Ghetto Uprising.After living in a refugee camp in Germany, Eichenbaum moved to the US with his family and eventually fulfilled his dream of moving to Israel in 1964, when he accepted a job with Israel Aerospace Industries Ltd and helped found ELTA Systems Ltd. Alon’s picture shows his father sitting on his grandfather’s shoulders next to a Fouga Magister aircraft, during a family day at the workplace in 1970.His father would go on to fly that model of aircraft many times as a pilot in the Israel Air Force. In 2010, Alon’s father also began working at ELTA. “I will be the third generation of engineers in my family,” said Alon.Pola Ovrutski, director of Hillel at Ben-Gurion University, said that the project serves Hillel Israel’s mission to strengthen the Jewish identity of Israeli students and to deepen their sense of belonging to the Jewish people.“The digitized images will be preserved for future generations and will provide a platform for the stories of Jewish families, mainly from eastern Europe and the former Soviet Union, during the Holocaust and WWII and in the years between the war and the establishment of the state [of Israel],” Ovrutski said.As part of the project, postcards will be designed from each picture – one side featuring the old image and the other side the restored one – with the story printed along the lines reserved for text. The postcards will be sold at a price of NIS 2 each at the Hillel offices of Ben-Gurion University and on the organization’s website.