The reel deal in the Holy City

Local film aficionados can look forward to an array of guests, movies and citywide events at the Jerusalem Film Festival. 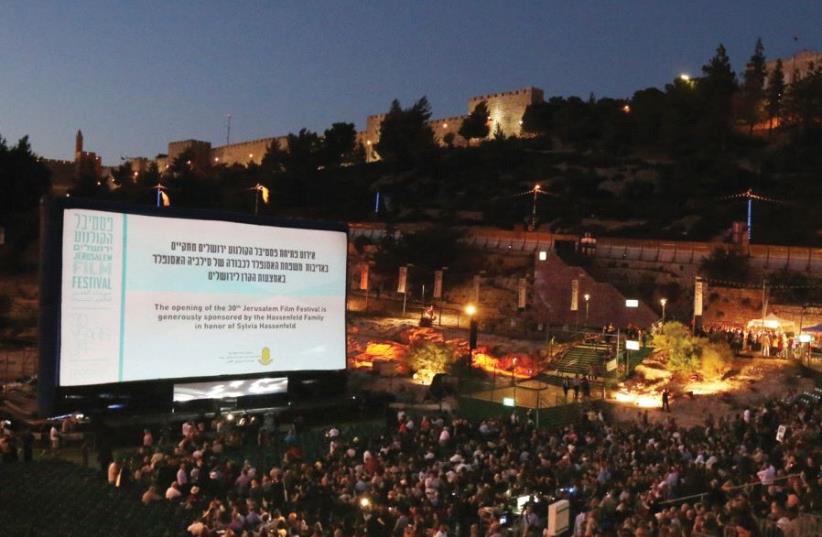 The Jerusalem Film Festival at the Sultan’s Pool
(photo credit: MARC ISRAEL SELLEM)
Advertisement
The 34th Jerusalem Film Festival, which runs from July 13-23, will feature some distinguished guests, in addition to hundreds of great movies, special events and exhibitions.The Oscar-winning director Michel Hazanavicius, who made Redoubtable, the opening-night movie, will be present at the opening. The film tells a fictionalized account of a love affair in the life of master filmmaker Jean-Luc Godard.Among the other guests will be Philippe Garrel, the director of Lover for a Day, his latest acclaimed film, about a young woman whose father takes a young lover. Garrel is known for his psychologically acute contemporary romances, and his 2015 In the Shadow of Women will be shown in a special screening. His son, Louis Garrel, stars in Redoubtable and will also be at the opening.Several other guests will participate in the launch of a special film project, The Quarters, which will be filmed in 2018 and released the following year. The Quarters will be made by four renowned directors – Todd Solondz (Happiness, Welcome to the Dollhouse), Anna Muylaert (The Second Mother, Don’t Call me Son), Mohsen Makhmalbaf (Kandahar, Salaam Cinema) and Arsinee Khanjian (Ararat, A ma soeur) – who will tell the story of Jerusalem’s Old City and its four quarters: Jewish, Christian, Muslim and Armenian. Each director will tell a contemporary story in a different quarter of the Old City and the four short films will be put together into one full-length feature film.Muylaert’s newest film, Don’t Call Me Son, about a young man whose discovery that he was abducted as a baby adds to his general confusion about life, will be shown at the festival, along with her previous film, Second Mother, the story of a Brazilian housekeeper and her strong-willed daughter.Other guests include Claude Lanzmann, the outstanding documentary director, who will present his latest film, Napalm, which premiered at Cannes Film Festival earlier this year. In addition, Lanzmann will participate in a special screening of his first full-length film, Israel, Why.Ferenc Torok, Hungarian director, will present his film 1945, which is participating in the International Competition. Fellipe Gamarano Barbosa’s Gabriel and the Mountain, which won two prizes at this year’s Cannes Film Festival, tells the story of a unique gap year that an old friend of his took.This year, the festival will be not only be at the Jerusalem Cinematheque (movies will also be shown at YES Planet and Lev Smadar), but will be branching out, with citywide events funded by the Jerusalem Foundation and the Ted Arison Family Foundation. Among the special features this year will be the JFF On the Go Trucks, two trucks which will bring free movies to neighborhoods all over the city, at 8:30 p.m. every night during the festival. There will be films screened at the First Station throughout the festival, and several movies, among them the classic Cinema Paradiso, which will be screened by the Jaffa Gate, where there will also be an interactive music event.At Zion Square there will be virtual reality beams and a science-fiction-themed event, along with many other activities.A video screening in brilliant colors will be projected onto the Klal Building during the festival, and there will be rooftop screenings of student films, complete with beer.At the Museum of Italian Jewish Art on Hillel Street, there will be events for children.The light rail Safra Station on Jaffa Road will be decorated like a station from the Wild West, with an augmented reality screen and many other bells and whistles.You would be surprised at how many films and programs sell out, so if there is something you really want to see, it’s always a good idea to buy tickets in advance.For the full list of films and events, go to the festival website at jff.org.il