El Al flights have often been flashpoints of friction between the austere form of Judaism practiced by many ultra-Orthodox Jews and secular Jews. 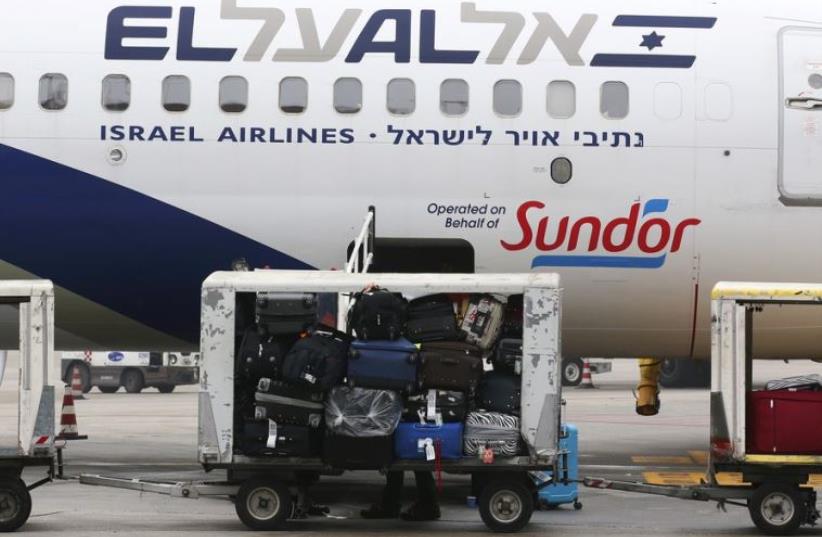 Baggage carts are seen on the tarmac near an El Al Israel Airlines plane at Venice airport
(photo credit: REUTERS)
Advertisement
An Israeli woman is suing El Al for gender-based discrimination after she was asked to switch seats on a flight from Newark to Tel Aviv in order to accommodate an ultra-Orthodox man who asked not to be seated next to her.According to The New York Times, Renee Rabinowitz, a Holocaust survivor who is now retired following a successful career as a lawyer, reluctantly agreed to switch her aisle seat in the business-class section of El Al Flight 028 this past December after a man wearing "Hassidic or haredi garb" took his place in the same row near the window.El Al flight attendants, wanting to defuse the controversy, asked Rabinowitz if she would like a seat closer to first class.“Despite all my accomplishments - and my age is also an accomplishment - I felt minimized,” she told The New York Times. “For me this is not personal,” Rabinowitz said. “It is intellectual, ideological and legal. I think to myself, here I am, an older woman, educated, I’ve been around the world, and some guy can decide that I shouldn’t sit next to him. Why?”El Al flights have often been flashpoints of friction between the austere form of Judaism practiced by many ultra-Orthodox Jews and secular Jews.Earlier this week, a Haredi Orthodox man rioted on an El Al flight home from Poland after complaining that the in-flight movie was “immodest.”The passenger, 36, from Beit Shemesh, damaged two viewing screens and attacked the cabin crew during his rampage on Wednesday, the Hebrew-language news website Walla reported.Police, who were waiting for the man when the plane landed, took him into custody to question him, according to Walla.El Al told Walla that the company “is not prepared to accept violent behavior of any kind during flights.”As for the Rabinowitz case, an El Al spokeswoman told The New York Times that “any discrimination between passengers is strictly prohibited.”“El Al flight attendants are on the front line of providing service for the company’s varied array of passengers,” the statement said. “In the cabin, the attendants receive different and varied requests and they try to assist as much as possible, the goal being to have the plane take off on time and for all the passengers to arrive at their destination as scheduled.”