Former premier Ehud Olmert is released early after a 16-month imprisonment that marked one of Israel's biggest and most shocking corruption affairs. 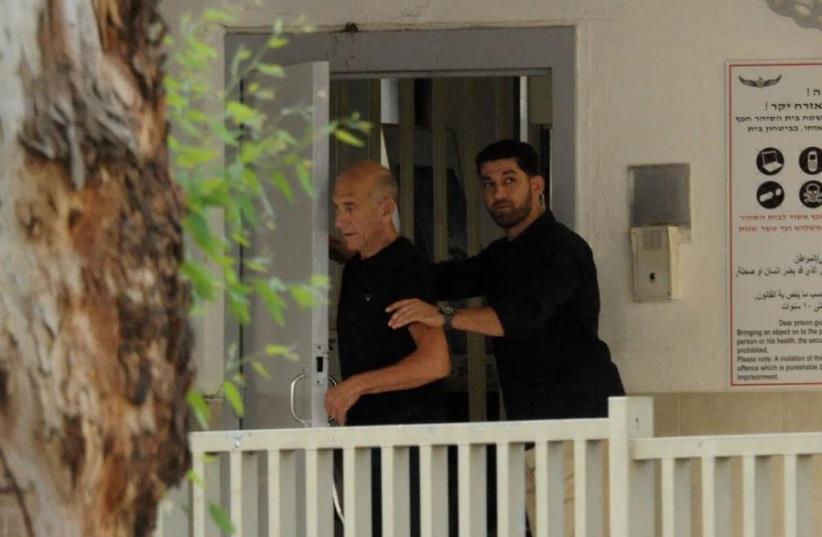 FORMER PRIME MINISTER Ehud Olmert being released from prison
(photo credit: AVSHALOM SASSONI)
Former prime minister Ehud Olmert was released from prison early Sunday morning after spending 16 months behind bars for a series of corruption convictions that included fraud, bribery and obstruction of justice.His sentence was shortened by onethird in a surprising decision by the parole board on Thursday, despite a new probe into alleged leaking of classified documents by the former premier. It was initially reported that the state prosecution would appeal the decision, but it declined to do so, allowing Olmert to end his prison term earlier than expected.The 71-year-old former prime minister and ex-mayor of Jerusalem left Ma’asiyahu Prison in Ramle at 6:24 a.m. Hours later, video was posted online of Olmert strolling with body guards through a Tel Aviv mall.Olmert was released on restrictive conditions that include being forbidden from traveling abroad; mandatory twicea- month appearances at a local police station; and once-a-week meetings with a social worker until the end of his sentence in May 2018.However, a spokesman for the President’s Office said Olmert had sent a request to President Reuven Rivlin to lift the restrictions. The spokesman said there was no deadline for responding to the request.A lawyer by training, Olmert began his political career in the 1970s as a rightwing Likud lawmaker who targeted organized crime. As prime minister, Olmert waged war against Hezbollah in the Second Lebanon War in July and August 2006, and against Hamas in the Gaza Strip in Operation Cast Lead in December 2008 and January 2009.The ex-prime minister was sentenced for crimes in three matters: The Holyland real estate corruption affair during his term as Jerusalem mayor (1993-2003); illegally receiving envelopes of cash from New York businessman Morris Talansky from 1993 to 2002; and seeking to obstruct the testimony of his former longtime bureau chief Shula Zaken.In its ruling on Thursday, the six-member parole board panel said Olmert’s behavior in prison had been “impeccable,” except for one case in which he said something inappropriate to a guard, for which he was punished.
Former premier Olmert, just before entering jail: 'I did not take bribes'
Olmert wrote a more than 1,000-page memoir while in prison, sparking a new probe in May over suspicions the former premier leaked classified documents during the course of writing the book.The parole board added in its decision that the Prisons Service was fully aware that Olmert was writing a book; that hundreds of pages of the manuscript were transferred to and from prison beginning in November 2016; and that the Prisons Service did not try to prevent such transfers until mid-May.“The prison authorities could have stopped the movement of the materials from the prison if they wanted,” the decision said, adding that Olmert should not be held solely responsible for a failure of enforcement.“Olmert received the decision with happiness and excitement,” his attorney Eli Zohar told The Jerusalem Post on Thursday. “We hope that this will be the end of this 10-year story.”The heart of Olmert’s argument for early release was that most convicts are released by the time they have served two-thirds of their sentence, assuming they did not commit a violent crime, which he did not.Olmert’s lawyers have argued that, as the first prime minister to serve time behind bars, he suffered uniquely and served his time for financial crimes that, in the final analysis, represented only a small part of the original accusations.The prosecution opposed the early release request on a number of grounds, including Olmert being the subject of a preliminary review regarding the documents.However, the State Prosecutor decided on Thursday evening that there was “no basis” for filing an appeal, and Attorney-General Avichai Mandelblit accepted its recommendation.“During my time, I also made some mistakes, although in my opinion they weren’t criminal, and today I pay a hefty price,” Olmert said in a video statement before entering prison. “There is no man above the law.”Reuters, Yonah Jeremy Bob, and The Jerusalem Post staff contributed to this report.