Politicians and NGOs react after JPost obtains list naming organizations as NGO bill is in the process of passing.

The offices of the Breaking the Silence organization in Tel Aviv
(photo credit: REUTERS)
Advertisement
The vast majority of organizations the Justice Ministry will target in the NGO bill that the Knesset is in the process of passing are left-wing, The Jerusalem Post has learned.On Thursday, the Post exclusively obtained the list of NGOs which shows that 25 of the 27 organizations targeted in the bill are left-wing, while two are politically non-affiliated religious organizations.Several hours after the Post publicized the list and after stalling its release on Wednesday, the Justice Ministry released the list to the media, providing a spreadsheet which showed the percentage of revenue for each group that stemmed from foreign governments.The Justice Ministry bill in question, which returned to the Knesset Constitution, Law and Justice Committee on Wednesday after passing a first reading in the plenum, requires any NGO receiving more than half its funding from a foreign governmental entity to identify itself as such in any publications and any meetings with public officials.The bill has been contentious because most of the organizations under the bill’s purview were predicted to be left-wing.The list, obtained on Thursday, confirms that suspicion. 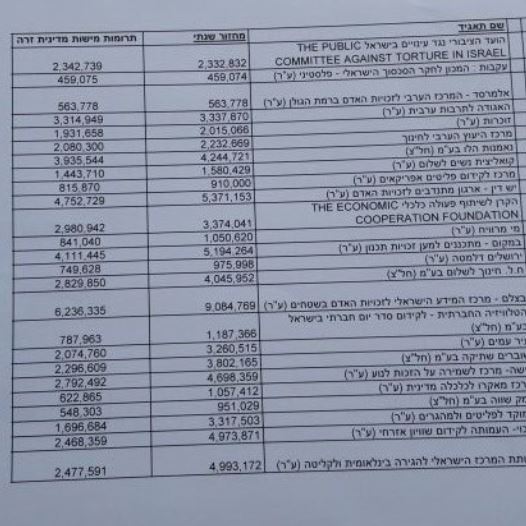 An alternative bill by opposition political parties had suggested applying the measure’s transparency and labeling provisions to NGOs in Israel receiving funds from individual foreign donors as well as foreign states, which would cover more groups on the Right.The NGO bill has stirred controversy over the past year, drawing ire from most Western capitals, which have described the legislation as a blow to Israel’s democracy and an attempt by right-wing politicians to stifle criticism from left-wing organizations.The organizations listed included B’Tselem, Breaking the Silence, the Economic Cooperation Foundation, Yesh Din and the Public Committee Against Torture in Israel.According to the Justice Ministry report, Yesh Din, for example, receives NIS 4.7 million of its NIS 5.3m. budget from foreign political entities. B’Tselem gets NIS 6.2m.of its NIS 9m. budget from foreign sources as well.On Wednesday, Nonprofits Registrar representative Yafit Shemer told the Knesset committee that the legislation on transparency for organizations getting most of their budgets from foreign governments will affect 27 NGOs.The two NGOs not perceived as left-wing groups are Midrash Nezer Shlomo, a kollel institute for advanced Torah study in the capital’s Har Nof neighborhood, and Hessed L’Avraham, a charity in Netivot.Committee chairman Nissan Slomiansky (Bayit Yehudi) prohibited Shemer from presenting the list to the MKs, arguing that he wants the bill to be “clean” of being drafted in a way that would target specific NGOs, sparking vocal debate among lawmakers. As of Wednesday, the Justice Ministry had not responded to requests for the list.In response to the list, nationalist organization Im Tirtzu said it shows that European motives for funding the organizations are anti-Semitic, and that the bill is necessary.“The list of organizations proves beyond all doubt that these are not left-wing or human rights organizations,” Im Tirtzu director-general Matan Peleg said. “These are delegitimization organizations that are meant only to slander the State of Israel and reduce its sovereignty, and these activities are funded by foreign governments, so they [the NGOs] make money off of the conflict.”Peleg said he found it “very strange that European countries are obsessed with sending millions of euros specifically to propaganda organizations meant to discredit the Jewish state. This phenomenon is reminiscent of dark times in history.”The Im Tirzu director-general said Israelis have the right and the responsibility to respond through legislation to “blatant undemocratic foreign intervention in our internal affairs.”A host of left-wing and human rights NGOs slammed both the initiative and the list.Breaking the Silence called the move “another step by Netanyahu’s government intended to crush democracy in order to continue and deepen the occupation.”“This attempt will also fail in silencing us. We will continue to raise the voices of soldiers who love Israel and who think that the military rule held over millions of Palestinians is morally wrong, hurts us as a society and that the occupation must end.”B’Tselem called the list “a blacklist we’re proud to be on, and it puts to rest the government’s bogus claim that this bill is anything other than a political assault on dissent.”The Association for Civil Rights in Israel said the list was “further proof that the bill is only one part of the campaign to delegitimize human rights organizations and the civil society that are critical of government policies.”NGO Monitor, which criticizes many of the groups but opposes the bill on nuanced policy and tactical grounds, responded to the list stating, “The data clearly shows that almost all of the political funding from European governments – tens of millions of shekels every year – goes to a very narrow group of Israeli political NGOs.”“As critics note, members of Breaking the Silence, Zochrot, and other recipients use the money primarily to travel around the world, actively opposing the policies of the government... No European ‘human rights’ and ‘peace’ money goes to centrist or right-wing groups, and this has triggered an angry response among many Israelis.Furthermore, as NGO Monitor’s research shows, European state funding of Israeli NGOs has no parallel elsewhere.”Knesset members on the Left joined the NGOs in condemning the legislation.Joint List chairman Ayman Odeh said the list proves “this is clear political persecution and an inherently anti-democratic bill.”MK Miki Rosenthal (Zionist Union), one of the lawmakers who protested Slomiansky’s refusal to share the list, said on Thursday that the revealed list shows the “ugly hypocrisy” of the bill’s supporters.“First they marked a target – destroying human rights organizations – and then they drafted a bespoke bill that would fit only those organizations,” Rosenthal stated. “That is why Slomiansky prohibited the Justice Ministry from presenting the facts to us.”According to Rosenthal, passing the NGO transparency bill would show that “human rights are a detestable value to the government of Israel.”Meretz chairwoman Zehava Gal- On said that looking at the list proves the legislation is “not connected to transparency, as its backers claim, rather it is connected to an attempt to destroy organizations that criticize government policies and a desire by the government to silence human rights and left-wing organizations.”Jeremy Sharon and Jerusalem Post staff contributed to this story.