Greek pilot: We are your friends, and we are always here for Israel 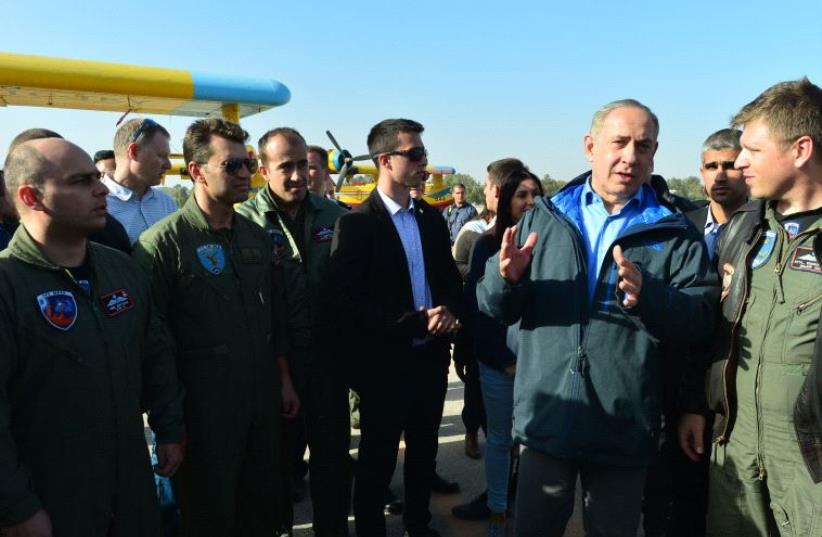 Prime Minister Benjamin Netanyahu meets with foreign pilots helping fight fires in Israel
(photo credit: KOBI GIDON / GPO)
Advertisement
One of the Greek pilots who has been flying over Israeli skies fighting fires across the country spoke briefly at the invitation of Prime Minister Benjamin Netanyahu to assembled media at the Hazor IDF base Friday afternoon.Saying that it was his first time talking into a microphone, the Greek pilot, who was wearing an Israeli flag patched onto his uniform, said that it was the second time he had come to the aid of the Israelis, and that "we are your friends, and we are always here for you."


Thanking the governments of Egypt and Jordan for their offers of assistance earlier on Friday, Netanyahu said that the two neighbors had offered support before Israel could request it. He also praised the hard work of all the Israeli forces and volunteers working to battle the flames.Egypt will be sending two helicopters, and Jordan will be providing fire trucks and crews.Friday has been a quieter day than Thursday, when fires destroyed hundreds of houses in Haifa and caused widespread damage across the North and Center. Nevertheless, Netanyahu said that it's better to receive more help than necessary, rather than not enough.He added that the government's weekly cabinet meeting would be held in Haifa on Sunday, rather than Jerusalem.Answering a question regarding the cause and indeed motive behind the fires, Netanyahu said that he was unsure as to the extent of the planning behind the arsonists, however that the authorities know that it is motivated by terrorism nonetheless.Interior Security Minister Gilad Erdan also addressed the press, saying that Israeli security forces had just arrested an Arab male near Abu Tor in possession of materials to make a fire.