Rabbis from the nonprofit Beit Hillel present a document urging greater acceptance of LGBT members within the Orthodox realm. 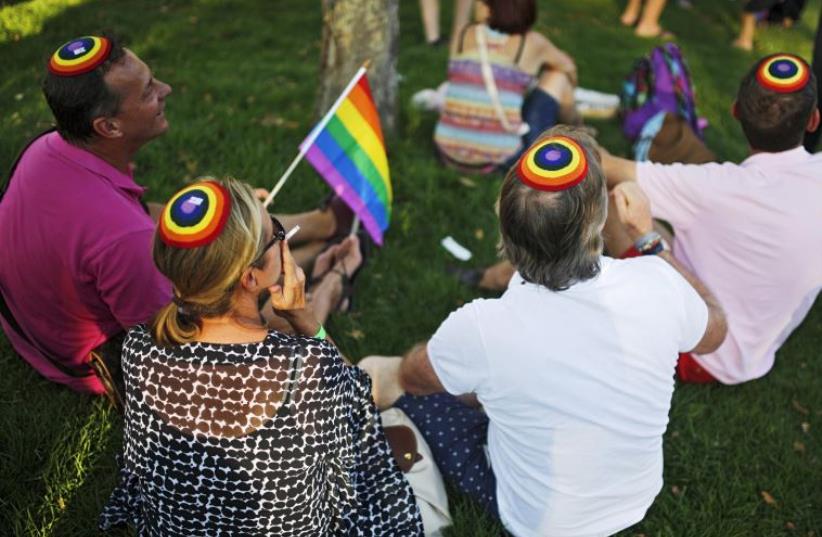 Participants take part in the 2015 Jerusalem Pride Parade
(photo credit: REUTERS)
Advertisement
The Beit Hillel association of religious-Zionist rabbis has issued a position statement of Jewish law, calling for the religious community to allow homosexuals to take up communal religious duties and to show greater inclusiveness toward religious homosexuals, in general.Such a statement from an Orthodox organization is extremely rare, although it is not the first, and was welcomed by representatives of the religious LGBT community.“It is no secret that those who discovered that they are gay have felt alienated and cut off from the religious community,” said Beit Hillel chairman Rabbi Meir Nehorai. “It’s no secret that we have preferred to ignore this issue and not to deliberate it... The time has come discuss with courage and honesty how to integrate them within the community.”The six-page statement, issued Sunday evening and authored by a number of rabbis and female religious scholars associated with Beit Hillel, asserts that homosexual acts are forbidden by Halacha and cannot be permitted by religious leaders within this framework, nor can Orthodox rabbis ever legitimize same-sex unions, as have the Reform and Conservative denominations.Additionally, the authors write that gay men and women should try and “refrain from severe transgressions,” but that anyone committing such transgressions should be seen as doing so unintentionally and not deliberately, as those concepts are understood within Jewish law.They emphasized, however, that the Torah and Halacha prohibit homosexual acts but not homosexual inclinations or orientation, and “thus, there is nothing wrong, morally or halachically, with individuals, men or women, exhibiting homosexual tendencies.”Beit Hillel’s statement said religious homosexuals, therefore, may serve in any congregational capacity, just like any other member of the community.This means, according to Beit Hillel director Rabbi Shlomo Hecht, that they may fulfill all communal religious obligations such as leading prayer services, being called to the Torah, and similar such duties, except for leading services on Yom Kippur.“It is up to those around them [homosexuals] – like their relatives and other members of the community – to be even more sensitive to fulfilling the Torah’s obligation of ‘loving your neighbor as yourself’ in the way they conduct themselves with them. They also need to make sure they don’t violate the prohibition of verbally harming others,” Beit Hillel stated.The authors argue that many communities do not reject individuals who transgress other religious prohibitions, and that the same attitude should be adopted for dealing with people of the LGBT community.The statement said it is up to individual communities to determine their approach to gay members, but that “the guiding principle should be to spread the wings of the community around these people and bring them close with love.”Speaking to The Jerusalem Post, Hecht reiterated that, as an Orthodox organization, Beit Hillel could not permit the act of homosexual sex and said it was a requirement of Jewish law to refrain from it.He said, however, that this was a matter between an individual and God, and that it should not influence the attitude of a community toward religious gays who want to remain within an Orthodox framework.“The phenomenon [of religious gays] has been completely ignored by the religious community, and so we wanted to give tools to rabbis and other communal leaders for dealing with it, and these are our recommendations,” Hecht said.“It is a clear call to religious communities to include these people in communal life.”Daniel Jonas, chairman of the Havruta-Religious Gays in Israel organization, with whom Beit Hillel consulted for their position statement, welcomed the rabbinical association’s stance, and called it “courageous” for adopting this position.He added, however, that Havruta hoped the statement “will constitute an opening for a dialogue among equals, a dialogue that will advance, at the end of the process, full recognition of us, our partnerships and our families.Jonas said, however, he was disappointed the document did not contain much in the way of constructive advice for the religious LGBT community, such as how single-sex couples and parents should manage their life at home; adoption of children by, or child surrogacy for, gay couples; and for their interactions with the broader community such as bar and bat mitzvas for adopted or surrogate children and similar issues.Hecht said he believed Beit Hillel would deal specifically with the issue of adoption and surrogacy for the LGBT community in the future.Havruta is one of at least three organizations representing and helping religious gays in Israel and, alone, has 700 people who are registered to receive information from it, according to Jonas.Several national-religious rabbis, including a prominent leader in the conservative wing of the sector, Rabbi Shlomo Aviner, strongly criticized Beit Hillel for the position statement.“This organization does not represent anyone but themselves, and not Jewish law,” he wrote in a column on the national-religious news website Srugim. “Jewish law states that to lead a prayer service one must be free from sins, and for certain not to commit a sin so severe which is an abomination.”Aviner, an advocate of so-called “conversion therapy” for gays and lesbians, said that there was no question that it is forbidden to allow homosexuals to perform communal religious duties, citing the Torah’s prohibition against homosexual sex.In 2010, a large group of Orthodox rabbis, based in the US, Israel and further afield, including leading figures from the liberal-Orthodox sector, declared that homosexuals should not be ostracized or rejected by religious communities, and should be eligible for religious and communal honors and treated as any other member.