Hebrew Book Week kicks off with hundreds of events throughout Israel

In Tel Aviv, most of the events will be held in Rabin Square; in Jerusalem, at the First Station and in Haifa at the Merkaz HaCarmel Auditorium. 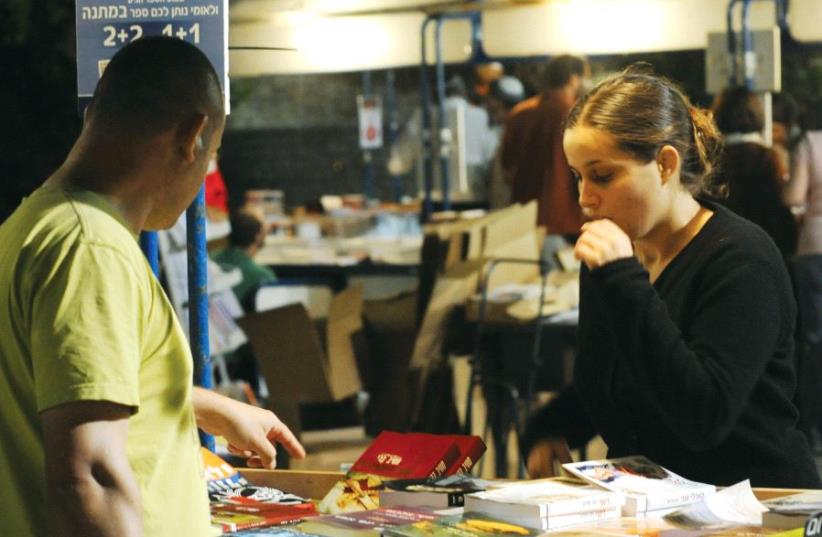 People purchase books at the annual book fair in Jerusalem
(photo credit: AMOS BEN-GERSHOM/GPO)
Advertisement
The Hebrew Book Week kicked off on Wednesday.
Between June 12 and June 22, hundreds of events are set to take place throughout the country, including lectures, book signings and round tables.
In Tel Aviv, most of the events will be held in Rabin Square; in Jerusalem, at the First Station and in Haifa at the Merkaz HaCarmel Auditorium.
Ahead of the Book Week, the National Library of Israel has released its Israel's Annual Book Report.
According to the report, 8,571 books were published in 2018, about 2,000 more than were published in 2008 (when 6,326 books were published) and 879 more books than in 2017.
Ninety-one percent of the books cataloged were published in Hebrew, 3.9% were in English, 2.9% were in Arabic and 1.1% were in Russian. 22 languages in total were present in Israeli publications in 2018.
Moreover, 85.6% of all the publications were original works, which marks a slight increase compared to 2017. The majority of translated books published in Israel were originally published in English, followed by German (4.1%), French (4%), Arabic (1.1%) and Swedish (1%). The other 27.2% of translated publications represented 30 different languages, mostly European.
1,045 of the published books were children's books, 11 less than in 2017: 93% of those were published in Hebrew, while 4.2% were published in Arabic and the rest were written in English and Yiddish.
The report also showed that double the number of books relating to children with disabilities and special needs were published compared to the last decade.
Since 2010, 52 children's books relating to children with disabilities were published. In the last decade, only 26 books addressing the topic were published and in the 1950's only two books on the topic were published.
Biographies about influential leaders globally and in Israel written for young children also saw a substantial rise in publication.
Albeit the fact that most questions can be easily and quickly answered on the internet, a steady rise was recorded in the number of reference books published in 2018, including cookbooks, hiking guides and fitness guides.
At least 1,330 books on Judaism and Jewish thought were published in 2018.
Over 400 biographies were published in 2018, of which 48 books were about Holocaust survivors and were written by second or third generation family members. This is about 20% more biographies than were published in 2017, when 320 biographies were published.
80% of the non-religious books written for Haredi readers were written by women.
430 new e-books and 550 audiobooks were received by the National Library in 2018 as well.
In addition, the National Library is celebrating the Week also with a series of events at the main library in Jerusalem and various cafes around the city.
The events include:
"My Bible is Open at the Book of Job" - Why Have the Bible Poems of Rachel Bluwstein Been Forgotten? Dr. Yehosheva Simet Shinberg will speak about the the famous pre-State Hebrew poet with her poems performed to musical accompaniment.
Tuesday, June 11th 6:00 p.m. at Tmol Shilshhom restaurant, 5 Yoel Moshe Salomon Street Jerusalem.
Apologies to Our Readers - Strange and Surprising Journalistic Mistakes in Reports on Literature and Authors. Dorit Gani, librarian and author of the books "Sarah Aaronsohn", "Golda Meir" and "Helena Kagan" in "The Israelis" series will speak.
Wednesday June 12th 5:00 p.m. Café Michael, 26 Halamed Hey Street Jerusalem
The Underground Don Quixote - Luba Schneerson and his Archive at the National Library. Ivgi Slutzk, researcher of the Schneerson Archive at the National Library will speak about the early Zionist pioneer and writer who was a member of the NILI underground and a cousin to the famous Chabad-Lubavich leader.
Thursday June 13th 6:00 p.m.
Shosh Café, 31 KKL Street, Jerusalem
We Loved Here - Yehuda Amichai – The Formative Years - with recitation of the celebrated Israeli poet with musical accompaniment,
Wednesday June 12, 8:00 p.m. at the National Library
How Does One Write a Novel? An Evening with the Author Meir Shalev, famous for his works of fiction, children's books and autobiographical books on contemporary issues.
Thursday June 13, 8:00 p.m. at the National Library
Special tours of the National Library will including a rare opportunity for the public to visit the underground archives of the Jewish state's largest library where tens of thousands of book arrive every year.
All events will be held in Hebrew. For more details, a full schedule, and for registering for the events click here.Tzvi Joffree contributed to this reporting.