Homing in on blue

Through creating rich illustrations that seamlessly weave Hindu, Jewish and American culture elements, Siona Benjamin has used her art to establish her identity and cultivate a sense of belonging. 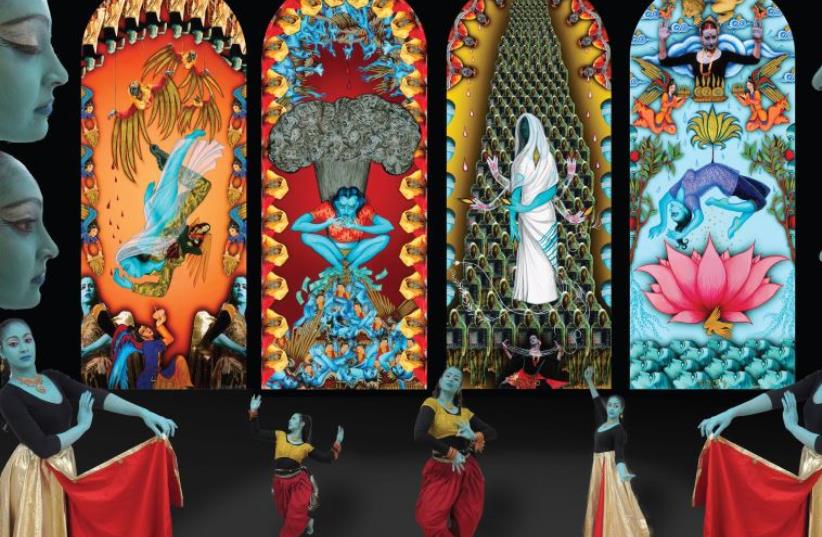 The artist's cathedral-scale panels, ‘The Four Mothers who Entered Pardes,’ are largely influenced by Jewish and Hindu theology
(photo credit: SIONA BENJAMIN)
Advertisement
For artist Siona Benjamin, it’s a blue world. A color that usually signifies despair and hopelessness transforms itself into something else in her art: a symbol for equality, strength and independence.“Very often, I look down at my skin and it has turned blue,” the Mumbai-born descendant of the Bene Israel community says of her olive complexion. “It tends to do that when I face certain situations of stereotyping and categorizing other people.”As a result, Benjamin, 54, has created evolving incarnations of this blue-skinned character over the years, which has come to represent her own take on struggling with identity, and the many dilemmas that can result in belonging to not one, but many communities.Her work derives from first-hand experience that draws from elements from her youth growing up as a Jew in India, as well as aspects of American pop culture and history that she has encountered since she was a young adult. 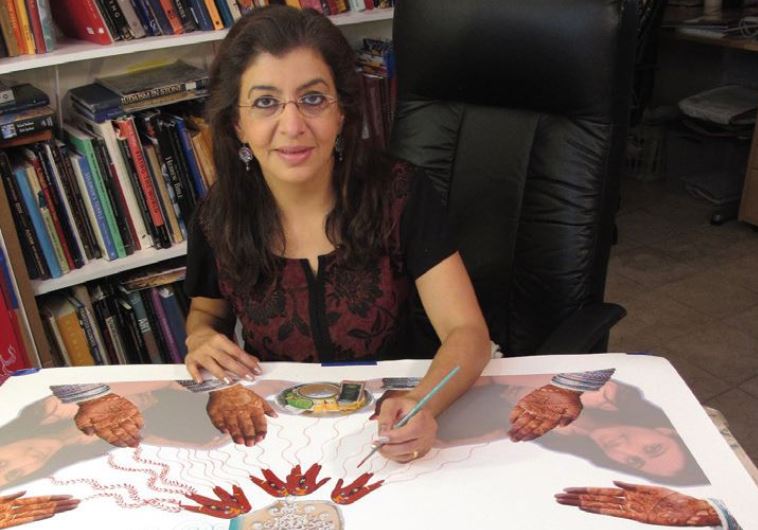 Siona Benjamin at work in her New York studio
“I like to put disparate elements together and be able to do more than just pack them in. It shouldn’t be like a patchwork quilt, it should be seamless,” she says of her art, which is typically gouache made from 22 karat gold leaf and blends Muslim, Jewish and Hindu symbols. As an example, in her vivid mixed media creation with cathedral-scale panels called ‘The Four Mothers who Entered Pardes’ she richly illustrates the anguish of Rachel, Sara, Leah and Rebecca.But this striking creation goes beyond your standard piece of Judaica – women are adorned with traditional Indian bindi forehead art; a trademark blue character with midriff exposed dances elegantly in the forefront.Although Benjamin won a Fulbright fellowship in 2010 for her work, many critics struggled to fathom and decide what to make of her compositions.“Are you the person in charge of prescribing whether this should belong together or not?” is the rhetorical question she often poses to the perplexed, dismissing the “whole concept of what belongs or doesn’t belong, and this whole question of post-colonial thought of what we’ve been told.”At the onset of her career, Benjamin was dissuaded from creating such intensely personal art.“I was instructed by my professors in America to paint large, abstract paintings because that would bring me success,” she recalls of her time obtaining a master’s degree at Southern Illinois University.“I did some of that and I learned a lot from it. It wasn’t a wasted experiment. But then I started reflecting and thinking, ‘What is good for me? I’m an Indian, Jewish, American woman, living and trying to find myself and who I am. And if I’m going to make paintings according to somebody else’s formula, it’s not going to work.’” Embarking on her creative journey in which she explores her heritage enabled her to discover herself. But it came at a cost.
The Hebrew word ‘Shema’ at the center is surrounded by other Indian elements in ‘Improvisation #21, Sophie’s Love.”
“I feel like I can be nowhere and everywhere at the same time,” she says in a documentary made about her work titled Blue Like Me: The Art of Siona Benjamin.“The desire to “find home,” spiritually and literally, has always preoccupied me. This is a concern to which many Americans can relate, as this comparatively young nation was largely formed by immigrants and their descendants,” she says.When she began her artistic journey in the Midwest at 23, that lack of belonging caused a palpable sense of isolation. The sense of feeling adrift was especially keen with many members of her family in India, while others made aliya or immigrated to America.“I almost felt envious of my Indian friend who had all her uncles and aunts and her close family around her; she was protected and surrounded by them. But my scattered family was spreading all over the Diaspora,” she rues.BUT TODAY, three decades later, Benjamin has discovered through her art how to establish her sense of identity and has come to the liberating conclusion that belonging to many different worlds makes life richer, more interesting and spirited.“The feeling I have of never being able to set deep roots no matter where I am is somewhat unnerving, but on the other hand, there is something seductive about the spiritual borderland in which I seem to find myself,” she reflects.Over the years she has come to the liberating conclusion that “I don’t feel that need to find that perfect home anymore, because there is no perfect home. Home is kind of where you pitch your tent, home is where you think it is.”Benjamin, who considers her art transcultural, says of her family visits to Israel, “my cousins speak Hebrew and are married to different kinds of Jews. And their children are so Israeli. It’s incredible. So why would you want to be homogeneous?” Although Benjamin has been to Israel many times, she will experience an artistic “coming home” of sorts when her work is presented at this year’s Jerusalem Biennale at the Van Leer Institute. The exhibition “New York/New Work,” by the Jewish Art Salon, will be the artist’s first time being formally shown here. She will also be part of a panel discussion on October 30th with other participating New York artists, where two documentaries (including the one about her work) will be shown. 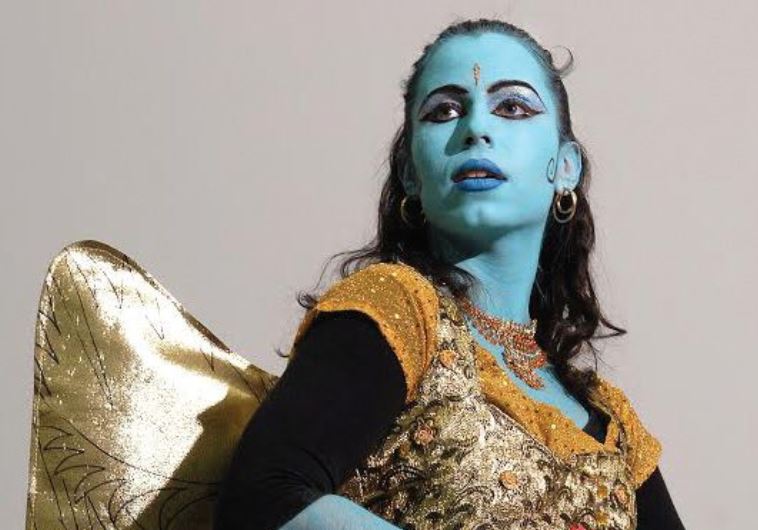 Ma'ayan Gerassi, an Israeli dancer, performed on the opening night of the Jerusalem Biennale, where Benjamin’s work was shown
And in what is sure to be a heartwarming evening, on October 1st, the Bene Israel community in Ramle will host a special event celebrating her work with a screening of the documentary about her art.“I’m just tickled pink that they want to have this little celebration and show my film. And they’re kind of telling me that they are proud of me. That is so sweet,” an exhilarated Benjamin says.But not everyone is ‘tickled pink’ (or even blue) about her impending visit to Israel. Proponents of the Boycott, Divestment and Sanctions movement, specifically, are aghast that she would do such a thing.“[Some critics have told me], ‘How can you go to Israel after all they’ve done to Palestinians?’” she sighs.Such a question – which assumes that individual Israelis are responsible for any given policy of the government – leaves Benjamin momentarily speechless, until she fires back saying, “Almost every country has committed some sort of atrocity. Should I boycott each country who has done something wrong over the course of history?” Of her support for Israel, she explains, “I have this umbilical cord attachment to Israel, maybe because whenever I go to Israel I have such a good time.”“People want to polarize issues a lot. They want to go to one extreme or the other and that is what I feel causes more violence in this world,” she laments, adding that discussing these topics is crucial. “This is my little humble belief. Though my art is a political vehicle, it’s a drop in the ocean.”A drop in the ocean it may be, but being engulfed in Benjamin’s deep blue sea is an inspiring, enriching experience.The Jerusalem Biennale for Contemporary Jewish Art will run from September 24-November 5; more information can be found at www.jerusalembiennale.org/the-jerusalem-biennale.