In preparation for the winter, the IDF has provided 30 tons of warm clothing and provided a mass supply of diesel fuel so villagers can heat their houses. 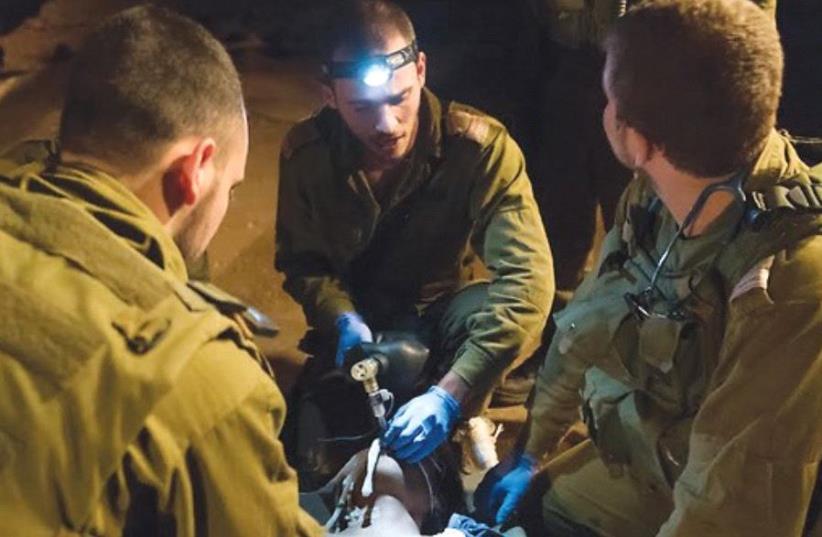 IDF SOLDIERS provide medical care to a wounded Syrian.
(photo credit: IDF)
Advertisement
Responding to a request from Syrian doctors, the IDF has facilitated the opening of a maternity hospital on the Syrian side of the Golan Heights – part of a significant expansion of Operation Good Neighbor, which provides Israeli assistance to war-ravaged villages near the border.According to Lt.-Col. E., the commander of Operation Good Neighbor whose full name has been withheld for security reasons, its main motive is humanitarian. “You can’t stand from the side and see your neighbor dying and living in hard conditions and know that you can help them and not do so,” he said.But the IDF also stands to gain from this initiative. By helping the Syrian population and creating good will, it hopes that the border will remain quiet.The army is working with “Syrian doctors, health care teams, people in municipalities, mayors, bakers and civilian people who can help the population,” Lt.-Col. E. said.According to the commander, the hospital opened two weeks ago in the village of Bariqa in the Quneitra region of the Syrian-controlled portion of the Golan Heights. While it is staffed entirely by Syrian doctors, the incubators, beds and ultrasound equipment come from Israel.“They told us they want to open a hospital for pregnant women,” Lt.-Col. E. said. “In this entire region of 200,000-250,000 people there was just one hospital for pregnant women in the south. The roads are not the safest and if they go there they will have to pay money to get the treatment.”Since it opened, more than 200 women have been treated at the hospital, more than 30 of whom gave birth. “It’s a great thing we have made with the Syrian doctors. A lot of women are very grateful,” the lieutenant-colonel said.Israel started treating wounded Syrians in its hospitals five years ago, caring for more than 4,000 people since then. In 2015, then defense minister Moshe Ya’alon admitted that some of them were rebel fighters. Operation Good Neighbor, which brings humanitarian aid into Syria, was launched a year and a half ago and its existence revealed by the IDF last summer.“We are working for the civilians and are thinking this action will be able to secure the Israeli-Syrian border,” Lt.-Col. E. said. “Of course we have some interest. We are thinking that they will understand that Israel is the only country that helps them so they will keep this border quiet. But the most important thing is that we took a decision not just to sit on the fence and see people slaughtered and suffering every day – we decided to help them. And we understand that it might change their feeling about Israel a little bit – that we are not Satan.”“The other side has been educated to hate you. These actions will let them see another side of who the Israelis are,” he said.The operation is expanding and reaching villages as deep as 20 km. across the border. Two hundred thousand people live in the areas helped by the operation, Lt.-Col. E. said.“It is spreading and becoming bigger and I’m happy to say, and proud to say, that we are able to increase the number of people the State of Israel and the IDF are helping – literally every day saving people’s lives.”Two months ago, a field clinic was opened along the border, staffed by American doctors brought by the US Christian organization Friend Ships Unlimited. It treats 50 people a day and plans to expand. Soldiers do not enter the facility, Lt.-Col. E. said. “Everyone knows we’ve helped them, however it’s better for everyone that the Americans treat the Syrians. And it’s working wonderfully,” he said.In preparation for the winter, the IDF has provided 30 tons of warm clothing and provided a mass supply of diesel fuel so villagers can heat their houses, the commander said. “For the last six years, the homes in the Quneitra region have been without electricity,” he said. “In the cold winter nights, the rainy nights, the snowy nights you have homes without the ability to warm them. Some people are living in tents because their homes were bombed. The diesel is very important for them to be able to warm [up] a little bit.”Every night, the IDF supplies food, medicine and medical equipment, the commander said.He said that IDF soldiers don’t enter Syrian territory. “We are opening the gate by military force. We understand our enemy is watching us, but we put the stuff on the Syrian side, close the gate and call them to pick it up. We are not entering the Syrian land.”IDF supplies of flour have brought the price of bread down by at least half in the assisted villages, Lt.-Col. E. said. “The flour is free, the diesel is free, the vehicle [for transportation] is free. They just have to pay for the worker in the bakery.”Lt.-Col. E. said the operation will continue as long as the Syrians want the help. “As long as they come and ask – and we have seen that more and more are coming to ask – we will continue to help.”