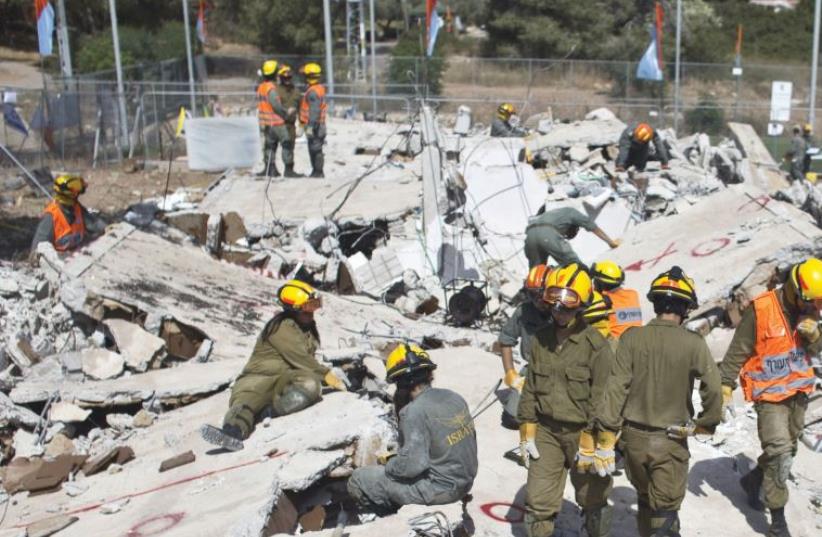 SOLDIERS TAKE part in a drill simulating the rescue of victims from the rubble of a collapsed building as part of a five-day annual home front defense exercise last year.
(photo credit: REUTERS)
Advertisement
Imagine this: You are a soldier behind enemy lines. A firefight has broken out between your squad and terrorists in the Gaza Strip, and your best friend is hit by gunfire. The paramedic whips out his VR glasses and, with the help of a doctor in Beersheba’s Soroka-University Medical Center, he saves his life.While that scenario might seem fantastical, the reality is that it might not be so far away for the Israel Defense Forces.Established less than a year ago, the IDF’s Medical Innovation Branch has been working on several projects to improve the innovative spirit of the military’s Medical Corps.“Where is the future of combat medicine going?” Lt.-Col. Ariel Furer, chief medical innovation officer at the IDF Medical Corps, explained to The Jerusalem Post at his base in the center of the country. “We need to be faster, more agile. We have to work much faster, plan faster and treat faster. And make the relevant changes much faster.”The Medical Corps is one of the largest health organizations in the country and faces unique challenges, providing it with opportunities not available elsewhere.The main purpose of Furer’s unit is not only to create new and innovative medical technology, but to promote a spirit among troops to collaborate with key players such as health organizations, government agencies and academic institutions both in Israel and abroad.Israel is known as the Start-Up Nation, and “the military is just one segment of Israel’s innovative community,” Furer said. “We firmly believe that the digital era will enable us to get closer to our patients and bring forward innovative ideas and solutions to the most challenging environments.”Furer said he believes his unit will “revolutionize healthcare in the country” with the best and brightest caregivers in the country, and he doesn’t want the answers but the challenges.
“Medical innovations are very hot right now. There’s a lot of buzz surrounding them,” Furer said.One such project is to use virtual reality glasses like Microsoft’s HoloLens. It allows for paramedics treating wounded soldiers on the battlefield to get guided treatment from a doctor in a hospital who does not have to deal with all of the sounds of battle in the background.According to Furer, a trial with the HoloLens glasses showed that paramedics had more self-confidence while providing treatment. But with a cost per unit of $3,500, “the technology is challenging,” Furer admitted.In July, IDF troops took an opportunity to try another innovative technique to drastically reduce the time that a wounded patient’s data gets to the doctors in hospitals.“We had a problem that, from the time when we get to injured people and begin to treat them, to the time that their information gets to the relevant authorities down the chain of treatment, it takes time. And it takes time for them to physically arrive,” Furer explained.His unit then came up with the idea of placing a bar code on the injured individual and develop a smartphone application where the paramedic in the field can place all of the patient’s relevant medical information.“You take a picture of the bar code, open the application, fill in the fields, and the moment you press send, all of the information is shared with the entire chain of treatment in real time,” he said.Furer explained to the Post that he had paramedics attach the bar code to wounded Syrians who came to Israel for medical treatment as part of the IDF’s Operation Good Neighbor, and saw that they were able to transfer all relevant medical information to doctors at Nahariya’s Galilee Medical Center .“We had a paramedic try the system on injured Syrians, and the doctors in Nahariya were able to plan ahead to receive the patients, an hour and a half before they arrived.”That’s only one of the innovations his small team has come up with.According to data, 83% of soldiers who die, do so within an hour of being wounded due to preventable blood loss. The IDF is therefore trying to improve the medical evacuation procedure of wounded soldiers during war.“We know that one of our challenges is to evacuate the injured,” so the idea of evacuating troops via autonomous aerial vehicles is an option being studied by Furer and his team.One unmanned aerial system (UAS) the IDF has been working on for several years is the Cormorant – a compact, unmanned, single-engine, VTOL (vertical take off and landing) aircraft.Its internal lift rotors allow it to fly in terrain where helicopters can’t, such as obstructed wooded or urban areas, or in areas where supply or medical convoys face deadly threats, eliminating the exposure of personnel to operational hazards.The Cormorant tactical UAS has the capacity to evacuate two casualties as well as the ability to reconfigure itself to carry other payloads. It has a total cargo volume of 2,640 liters, meaning the aircraft is able to deliver tons of supplies to sustain thousands of soldiers in the battlefield and subsequently evacuate any dead or wounded.Other drones the military is testing include one that can carry 40-50 kg. of medical equipment or medicine to troops behind enemy lines without risking more soldiers.But in case troops can’t be evacuated for medical care, Furer and his unit are also working on a medical cocktail, which will extend the golden hour before multi-organ failure occurs, in an attempt to optimize the chance of survival.For Furer, the medical care that troops receive in the field has to be the best.“We need to give really great medical care, because in the army... the guys: you’re always with them,” he said. “We have to dream far. There’s no need to dream for tomorrow – there’s enough people doing that.”