Netanyahu’s visit to India comes just seven months after Modi made the first ever visit by an Indian prime minister to Israel. 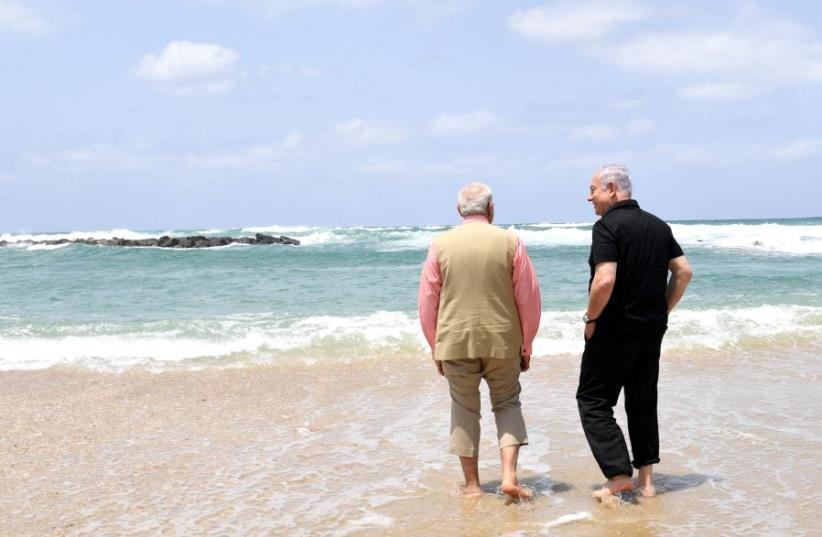 Israeli Prime Minister Benjamin Netanyahu and Indian Prime Minister Narendra Modi tour Dor Beach on the third day of Modi's visit to Israel‏
(photo credit: KOBI GIDEON/GPO)
Advertisement
Even as India’s Prime Minister Narendra Modi is scheduled to host Prime Minister Benjamin Netanyahu in New Delhi in two weeks, his government will simultaneously cultivate ties vigorously with the Islamic world as well, according to Indian media reports.Indian newspaper The Economic Times reported on Tuesday that Netanyahu’s visit to India, scheduled now from January 14 to 19, will be preceded by a visit by Iran’s transport minister who will prepare the launch of the International North-South Transportation Corridor linking India with Eurasia through Iran.This land, rail and sea corridor will make it possible to transport goods from Mumbai to Moscow in 22 days, rather than the current 40 days, the paper reported.The report said that in a view to “maintaining balance in its West Asia policy,” India – in addition to hosting Netanyahu – will host the Egyptian foreign minister and the deputy foreign minister of the UAE who will be taking part in the Raisina Dialogue, a high-level symposium sponsored by India’s foreign ministry and a leading Indian think tank. Netanyahu is scheduled to be a keynote speaker at the event.
Indian Prime Minister Narendra Modi arrives in Israel, July 4, 2017
Netanyahu’s visit to India comes just seven months after Modi made the first ever visit by an Indian prime minister to Israel. One of the striking features of that visit was that Modi did not couple it with a visit to the Palestinian Authority.But, according to Indian media reports, he may rectify that in February, as there is talk of adding a Palestinian Authority leg to a scheduled visit to the United Arab Emirates.The Indian Express reported on Saturday that India’s Foreign Ministry was working on scheduling a Modi trip to the PA, either before or after a trip by the prime minister to the World Government Summit in UAE from February 11 to 13. This would be a reciprocal visit to one Abbas paid to India in May, before Modi came to Israel.The newspaper quoted sources saying this visit would be a “standalone” visit.“Just like [the] prime minister skipped Palestine while visiting Israel, he will be visiting Palestine only, and not Israel,” the source said.Two days after US President Donald Trump announced the US would recognize Jerusalem as Israel’s capital, the Palestinian envoy to India Adnan Alihaijaa said in an interview with an Indian television network that a Modi visit was in the works. However, he gave no date.In a related development, India’s former ambassador to the UN Asoke Mukerji wrote an op-ed in the India Express saying that New Delhi’s vote against Israel and the US in the UN General Assembly on the Jerusalem issue last month needed to be seen “in the context of three converging interests of India’s foreign policy.”The first interest has to do with India’s desire to gain permanent membership on the UN Security Council, and “the larger objective of persuading the UN General Assembly to adopt a resolution by two-thirds majority vote to amend the provisions of the UN Charter and reform the UN Security Council.”The second issue involved in the Indian vote on Jerusalem, Mukerji wrote, has to do with India’s consistent policy that “Israel’s acquisition of territory by war” is inadmissible, something influenced by India’s own historical experience.“India, with its own experience of the violation of its territorial integrity by Pakistan’s military actions in Jammu and Kashmir, has endorsed the position of the UNGA and UNSC on Jerusalem. Its vote in the UNGA reflects the consistency of India’s policy on this issue,” he wrote.And the third reason for India’s vote in the UN against Israel on Jerusalem has to do with the country’s interests in the Arab world, the former envoy wrote.For instance, he wrote that Mideast crude oil and natural gas account for almost 60% of India’s energy needs. Likewise, he referred to a World Bank estimate in 2015 that about seven million Indian nationals were working in Saudi Arabia, the UAE and Qatar, remitting more than $28 billion to India’s “household economy.”Additionally, he wrote, the UAE has a $75b. sovereign fund for India, with $1b. already transferred to India’s National Infrastructure and Investment Fund.“Such statistics underline the critical role that investments, trade and remittances play in the current drive to transform India, and the role of West Asian countries in this context,” he wrote. “They also help explain India’s position on the Jerusalem resolution in the UNGA, which was introduced by Yemen on behalf of the Arab Group.”During his five day trip, Netanyahu is scheduled to spend three nights in New Delhi, and two in Mumbai. He will be accompanied by a delegation representing some 75 to 100 firms active in the security, technology, agricultural and water spheres.He is also scheduled to visit the Taj Mahal in Agra, as well as go to Ahmedabad, the largest city of the western state of Gujarat, where Modi served as chief executive for 13 years prior to becoming prime minister in 2014.In Mumbai, Netanyahu is to visit the Chabad House which was the target of a terrorist attack in 2008.He is expected to be joined there by Moshe Holtzberg, 11, whose parents were killed in the attack, and who now lives with his grandparents in Israel.While in Mumbai, Netanyahu is also expected to meet with leading Bollywood figures. A group of Bollywood directors and producers toured Israel last month looking for co-production opportunities.