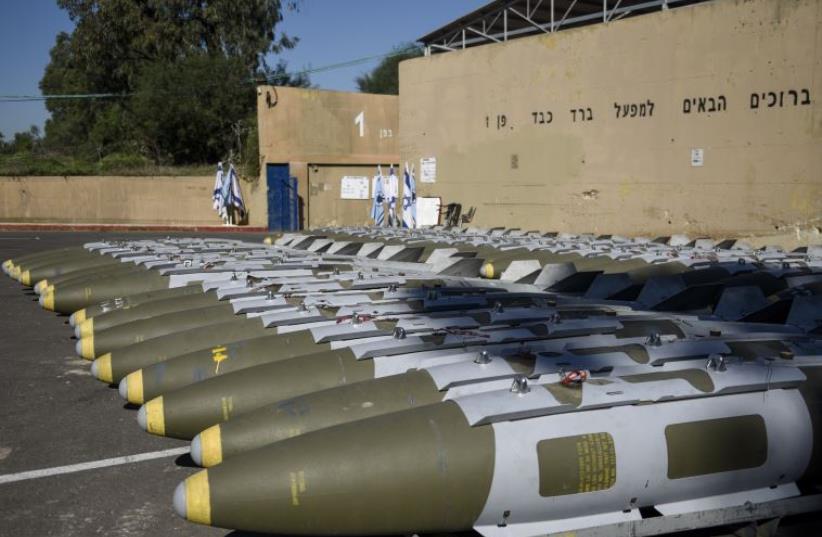 IAF war drill
(photo credit: IDF SPOKESMAN’S UNIT)
Advertisement
Israel Military Industries is expanding the range of its airto- ground weaponry, and is in varying stages of developments of three new types of bombs.The new bombs include the MPR 1000 and MPR 2000 munitions, whose names signify their weight in pounds.They have a significantly smaller blast and shrapnel radius than their MK 80 US equivalents, allowing for greater accuracy. The smaller blast radius can reduce harm to noncombatants, and enable much closer air support for ground forces in battle arenas.Additionally, the new bombs can penetrate reinforced concrete, and detonate with a delayed fuse when reaching their targets. This allows them to be used to target terrorist bunkers, or to pierce floors on a multi-story building before exploding at the target.The MPR 1000 can go through more than 1.5 meters of concrete, and the MPR 2000 has surpassed its original intended penetration capabilities, trials have shown, IMI sources said.Clients that would purchase such bombs would likely assemble them with GPS guidance systems, such as JDAM guidance kits, that convert unguided or “dumb bombs” into all-weather “smart” munitions.The smaller MPR 250 bomb is also in an IMI development program.The new bombs join the existing MPR-500 bomb, which was purchased by the Israel Air Force and used during the 2014 50-day war (Operation Protective Edge) with Hamas and Islamic Jihad in the Gaza Strip.The IAF is not the only client that purchased the MPR- 500 bomb; a number of international clients have bought the weapon as well.According to IMI, “MPR-500 penetrates straight through four multi-level floors and double reinforced concrete walls, or over 1 meter of monolithic double reinforced concrete target. The system is operational and in production.”The MPR series features a reinforced fuse box, designed to avoid incidents in which the bombs hits targets and fails to detonate.The MPR-500 had a 100 percent success rate during Operation Protective Edge.