Israel participates in its first NATO field exercise in 6 years

Israel was a full participant in the wide-scale drill held in Montenegro to evaluate the readiness and capabilities of NATO to face natural disasters. 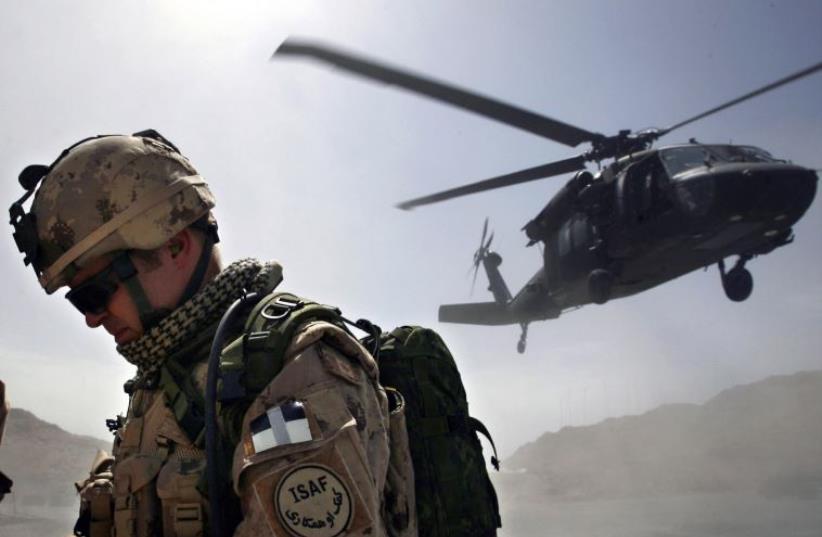 A Canadian soldier from the NATO-led coalition force turns his back away from a dust cloud kicked up by a Blackhawk helicopter
(photo credit: REUTERS)
Advertisement
PODGORICA, Montenegro – For the first time in more than six years, Israel was allowed to participate in a NATO exercise this week.Israel was a full participant in the wide-scale drill held in Montenegro to evaluate the readiness and capabilities of NATO to face natural disasters.On October 16, 20 Serbians including former ranking police officers were arrested in Montenegro. It was the day the tiny Balkan state situated on the shores of the Adriatic Sea held its important parliamentarian election. The suspects were accused of an attempted coup d’état and planning the assassination of Prime Minister Milo Djukanovic.The investigation is still under way, but leaks to the local media suggest that Russia was behind the plot, designed to sabotage the election and stop the Djukanovic government from, in 2017, bringing Montenegro into the North Atlantic Treaty Organization as its 29th member state.This week’s exercises were part of its accession preparation, and Montenegro was selected for the exercise because of a series of floods the country has suffered from in the past.Montenegro – whose name means “Black Mountain” – was the last state to split from Yugoslavia, declaring independence in 2006.It is a small nation of 13,000 square kilometers (half the size of Israel and the West Bank) with a population of just 650,000. The predominant religion is the Serbian Orthodox Church, with a substantial 20% minority of Muslims.In the Balkan region, there are also three Muslim states – Bosnian-Herzegovina, Albania and Kosovo – and a big Muslim minority in Macedonia. Because of it, the region has been a focal point for efforts to influence it, not only by the big powers but also by Turkey, Iran and Saudi Arabia.No wonder that Israel, which has full diplomatic relations with Montenegro but no resident ambassador (Dr. Alona Fisher-Kamm, the ambassador to Serbia, represents Israel in Podgorica), has a keen interest in the country and the entire Balkan region.This week with the help of Israeli intelligence, governments across the region arrested dozens of suspected members of Islamic State who were conspiring to attack international soccer games, including the one between Israel and Albania this Saturday.A total of 680 people from 32 nations participated in the drill, which simulated heavy floods and mudslides that also exposed the country to hazardous agents and swept away mines.Israel was represented by a joint delegation of rescue and coordination teams from the Zaka rescue and recovery organization, the Fire and Rescue Service, the IDF and the Defense and Foreign ministries.The Israeli teams, which included divers who practiced an underwater rescue mission in the cold waters of the Zeta River, performed very well and were praised by the drill managers.It was the first time Israel was allowed to participate in a NATO field exercise in more than six years, made possible because of the reconciliation agreement signed four months ago between Israel and Turkey, which normalized relations to the ambassadorial level. Since May 2010 and as a result of the Mavi Marmara protest ship incident in which Israel Navy commandos killed 10 Turkish citizens who attacked the commandos when they boarded to stop the vessel from reaching the Gaza Strip, NATO member Turkey had vetoed any Israeli participation. Now, Ankara has lifted its objection and Israel is back in the NATO fold.Israel’s relationship with NATO is defined as a “partnership,” a special status called “Mediterranean Dialogue,” which was initiated in 1994 by the North Atlantic Council in recognition of the Oslo Accords and the peace process. It currently involves seven non-NATO countries of the Mediterranean region: Israel, Algeria, Egypt, Jordan, Mauritania, Morocco and Tunisia. The forum is just one example of the international dividends when Israel is involved in efforts to enhance peace in the region.Aside from this multi-lateral relationship, Israel also benefits from bilateral relations with NATO. Recently, it was allowed to accredit an ambassador to the organization. Ronnie Leshno-Yaar, the ambassador to the EU, is now also assigned to NATO, as is Israel’s military attaché to the Netherlands.Once a year, IDF chiefs of staff or their deputies take part in a meeting with their NATO counterparts and the Mediterranean Dialogue group.Less known is the fact that Israel is also represented – currently by a lieutenant-commander in the Israel Navy, a female officer – at Northwood in the UK, which houses a special intelligence center to monitor terrorism and prevent weapons smuggling in the Mediterranean and Red Sea. NATO warships are taking part in the ongoing operation, but Israel wasn’t asked to contribute to this naval force.Nowadays, Israeli officials led by the Foreign Ministry are in negotiations with NATO on how to enlarge cooperation and enrich it with new ideas and dimensions, such as collaboration in the challenging realms of cyber warfare and combating terrorism.The IDF also would like to see more Israeli combat units taking part in military drills and not just search and rescue exercises, which have a more civilian nature. But, for the moment, this seems unlikely, at least as long as there is no progress on the peace front.A senior NATO official told me: “A peace process between Israel and the Palestinians would have been helpful to enhance the Israeli standing in the organization and improve the working relations and cooperation.”

Tags nato and israel
Advertisement
Subscribe for our daily newsletter