Israel signaled its intention to leave the education, scientific and cultural body in October, hours after the US announced its withdrawal.

By EYTAN HALON
A general view of the UNESCO headquarters in Paris
(photo credit: REUTERS)
Advertisement
Prime Minister Benjamin Netanyahu instructed Israel's ambassador to the United Nations Educational, Scientific and Cultural Organization (UNESCO) on Friday to submit a formal letter to the organization's director-general announcing Israel's departure from the UN body. "The letter will be submitted by Ambassador Carmel Sharma-Hacohen in the coming days, certainly before the end of the year," said Israeli Ministry of Foreign Affairs spokesperson Emmanuel Nahshon.The UNESCO constitution holds that a country's withdrawal from the organization takes effect on 31 December of the year following that during which the notice was given. Accordingly, Israel's departure will become effective on 31 December 2018.Israel signaled its intention to leave the body in October, hours after the US announced its withdrawal. Netanyahu praised the American declaration, calling it "a brave and moral decision, because UNESCO has become the theater of the absurd and because instead of preserving history, it distorts it."The US listed "concerns with mounting arrears at UNESCO, the need for fundamental reform in the organization, and continuing anti-Israel bias at UNESCO," as reasons for its departure. Then-director-general of UNESCO Irina Bokova expressed "profound regret" at the decision. Bokova was succeeded last month by Audrey Azoulay, France's former culture minister, who became the first Jewish head of the agency. 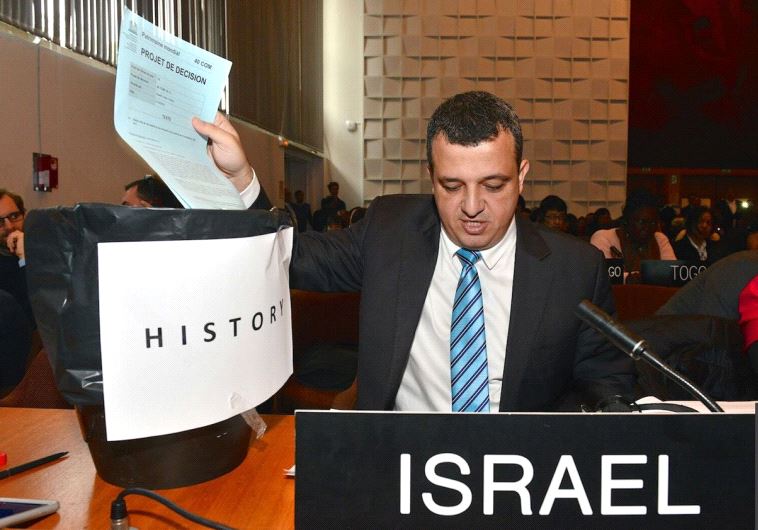 Israel's envoy to UNESCO Carmel Shama-Hacohen puts the resolution on Jerusalem in the 'trashbin of history' (EREZ LICHTFELD / PERMANENT MISSION OF ISRAEL TO THE UN)
Israel's decision to formally withdraw comes in the immediate aftermath of Thursday's UN General Assembly vote condemning US President Donald Trump's recognition of Jerusalem as Israel's capital, but also following a string of anti-Israel resolutions adopted by the body. In the past two years, three UNESCO resolutions disavowing Israeli sovereignty in Jerusalem have been adopted. In July, UNESCO recognized the Old City of Hebron and the Cave of the Patriarchs as endangered Palestinian world heritage sites.
UNESCO declares the Cave of the Patriarchs as Palestinian, angering Israel (Reuters)
"That's worse than fake news, that's fake history," Netanyahu stated during his United Nations General Assembly address in September, referring to the Hebron resolution.According to Channel 10, Sharma-Hacohen is set to meet Azoulay in the coming days and suggest that Israel could still remain within UNESCO, should the organization change its perceived anti-Israel behavior prior to the country's withdrawal becoming effective next year.In 2011, UNESCO became the first United Nations body to recognize the State of Palestine as a full member state. In response, Israel and the US froze their annual funding of the body and, in 2014, both countries lost their voting rights.