The ruling by Judge Arnon Darel further stated that the presence of the small community on the outskirts of the Kochav Hashahar settlement was legal. 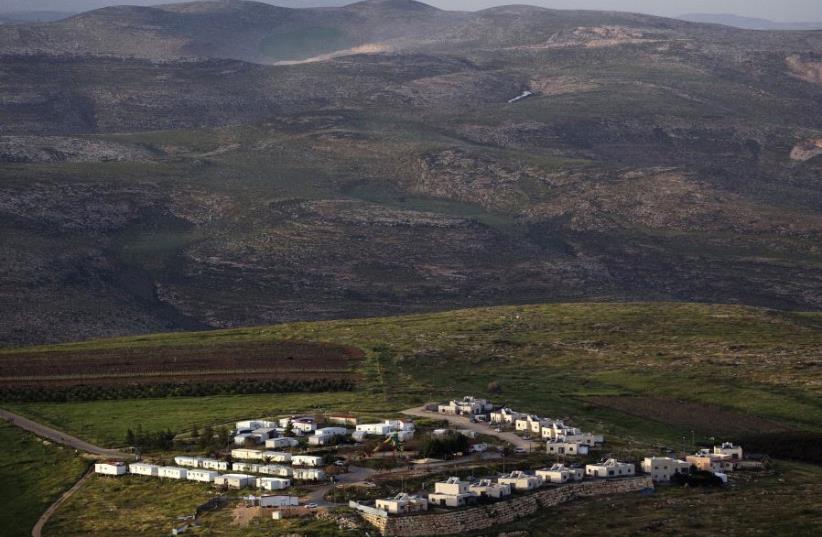 THE MITZPE KRAMIM outpost is seen, east of Ramallah.
(photo credit: REUTERS)
Advertisement
In a historic first in the history of the settlement movement, the Jerusalem District Court barred the IDF from evacuating the outpost of Mitzpe Kramim, even though it was built on private Palestinian property.The ruling by Judge Arnon Darel further stated that the presence of the small community on the outskirts of the Kochav Hashahar settlement was legal.Darel’s conclusions ran contrary to High Court of Justice ruling in such cases, which have consistently upheld the principle that illegal settler building on private Palestinian property must be removed.The ruling falls in line with the legal understanding on which the Knesset approved the Settlement Regulation Law.Attorney-General Avichai Mandelblit has opposed the law.The legislation allows for the retroactive legalization of some 4,000 settler homes on private Palestinian property and offers the Palestinian landowners monetary compensation.Both the law and Darel’s ruling make use of Israel’s market regulation, which allows for illegal property transactions to be upheld in certain cases where the buyers was unaware that the transaction was illegal.The High Court of Justice is adjudicating the legality of the Settlement Regulation Law and right-wing lawmakers hope this ruling could influence that case.It could also impact the High Court of Justice case regarding the possible evacuation of the Mitzpe Kramim outpost, filed by the Palestinian land owners of the property.Both this ruling and that law are part of a revolutionary judicial upheaval that right-politicians are attempting to undertake, to allow for judicial opinions to favor settler rights over those of private Palestinian landowners.Justice Minister Ayelet Shaked said, “The District Court today clearly stated that whoever settled [the land] with the state’s approval and in good faith, would not be evacuated. The injustice done in the evacuations of the Amona and Netiv Ha’avot [outposts] should not be repeated.”“The court should not be a party to the political debate between the Right and Left.That should be left to the ballot box. Through joint and intensive work, we have brought about a policy change in the state’s responses to the High Court of Justice. Now we are seeing a change in the district court,” she said.Knesset Land of Israel Caucus chairs MK Yoav Kisch (Likud) and Bezalel Smotrich (HaBayit HaYehudi) said the ruling proves that unauthorized settler homes can be legalized and evacuations halted even within the framework of the existing laws, with just “a little bit of good will and caring.”“This ruling is the result of a long legal battle, waged by the Mitzpe Kramim community and other settler organizations which sought to legalize and regulate a community that was built by the State of Israel.This is a historic and welcome decision, and we call upon the Attorney-General to apply the principles expressed in today’s decision to other communities in Judea and Samaria that are not yet regulated,” said Dr. Arnon Harel, the attorney who represented the residents of Mitzpe Kramim before the court.The left-wing NGO Peace Now said, “The court today chose to align itself with values of the annexation and dispossession set forth by the Israeli government headed by Bayit HaYehudi. Granting of land rights to criminals who settled in an illegal outpost, on the grounds that they did so in ‘good faith’ is outrageous.”“This is an outpost whose houses were built illegally and without permits, on private Palestinian land. This affair contains everything except ‘good heartedness.’ From Jerusalem comes the justice of [Education Minister Naftali] Bennett and [Justice Minister Ayelet] Shaked, we hope that the HCJ will stop this shameful behavior,” Peace Now said.According to Peace Now, the Mitzpe Kramim outpost was built in 1999 on land that belonged to the village of Deir Jarir and registered to Palestinian landowners.Those landowners petitioned the HCJ in 2011 against the homes. In 2013, while that case was ongoing, the Mitzpe Kramim families turned to the district court on the matter.The court said that while the land was outside the jurisdiction of the original seizure order on which the Kochav Hashahar was built, the Civil Administration initially believed it was part of a land seizure order. The land plots were then given to the settlement division of the World Zionist Organization.Darel clarified that therefore the principle of “good faith” applied here. The Mitzpe Kramim families then purchased their homes through valid contracts with the settlement division.