The report stated that Hezbollah continues to maintain a presence in South America and the Caribbean, “with members, facilitators, and supporters engaging in activity in support of the organization." 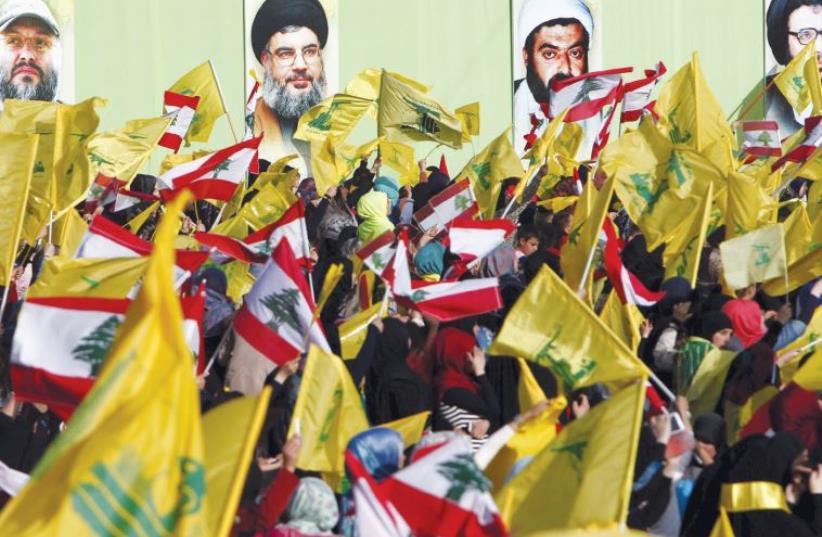 LOCALS IN NABATIYA, south Lebanon, carry Hezbollah and Lebanese flags on May 24 while the group’s leader Hassan Nasrallah speaks on a screen at a festival to commemorate the 15th anniversary of the IDF’s withdrawal from Lebanon
(photo credit: REUTERS)
Advertisement
Israel is helping Paraguay take actions against Hezbollah in the Tri-Border area with Argentina and Brazil, the Foreign Ministry acknowledged on Wednesday while announcing the opening of the new embassy in Asuncion.“Israel cooperates with Paraguay in the battle against terrorism and maintains a supportive role in actions against Hezbollah at the tri-border region,” the ministry said in a background statement on relations with Paraguay.One official explained that this cooperation has been taking place for years in the area, where there is a high concentration of Shi’ites of Lebanese descent who have set up a up a logistical base that assists the terrorist organization. Israel’s support for Paraguay in the area takes the form of intelligence cooperation, the official said, without elaborating.According to the US State Department’s country report on terrorism for 2016, “Paraguay continued to face challenges of ineffective immigration, customs, and law enforcement controls along its porous borders, particularly the Tri-Border Area (TBA) with Argentina and Brazil. Illicit activities within the TBA remained potential funding sources for terrorist organizations, most notably Hezbollah.”The report stated that Hezbollah continues to maintain a presence in South America and the Caribbean, “with members, facilitators, and supporters engaging in activity in support of the organization. This included efforts to build Hezbollah’s infrastructure in South America and fund-raising, both through licit and illicit means.”The official opening of the embassy came some two months after Paraguay’s President Horacio Cartes visited Israel. The ceremony at the new embassy was attended by a number of senior Paraguayan officials, such as the Supreme Court president, president of the House of Representatives, and labor minister.After Colombia, Paraguay is considered Israel’s closest friend in South America, with the Paraguayan government, according to the ministry statement, “having stood by Israel during Operation Protective Edge, a time when Israel was criticized by many countries. More recently, Paraguay supported Israel at major international forums.”Cartes won the election in 2013, and soon afterward told then-deputy foreign minister Ze’ev Elkin, who attended his inauguration, that he was interested in strengthening bilateral relations with Israel as well as pursuing an “independent” policy of supporting Israel in international forums, as opposed to the voting patterns of the vast majority of Latin American states.In 2012, even before the election, Paraguay and Colombia were the only South American countries that did not vote for granting the Palestinians non-member statehood status in the UN General Assembly.And since the election, Paraguay has noted against Israel on significant issues.For instance, in the UNESCO vote in April that effectively denied any Jewish connection to Jerusalem, Paraguay was one of 17 countries that abstained. It also voted for Israel at a very significant vote in the IAEA last September that would have forced Israel to open its nuclear facilities to international inspectors. And in 2015 it was not present for a vote on a UN resolution that mandated raising of the Palestinian flag at the world body.The two nations maintain a bilateral free trade agreement within the framework of Mercosur – the South American Common Market, with annual Israel-Paraguay trade at some $200 million. Meat is a major component of Israel’s imports, while technology is one of its major exports. For instance, sophisticated Israeli risk-prevention systems have been installed at the Itaipú hydroelectric power plant, one of the largest hydroelectric power plants in the world.According to the Foreign Ministry, the embassy reopening in Asuncion “represents a full historic circle after the embassy was closed in 2002, along with 15 other embassies around the world, due to budgetary constraints.”