Kahane lives? Why Netanyahu may have pushed Otzma into the Knesset

Thanks to Netanyahu, Otzma Yehudit, whose name means “Jewish Power,” has a real shot. 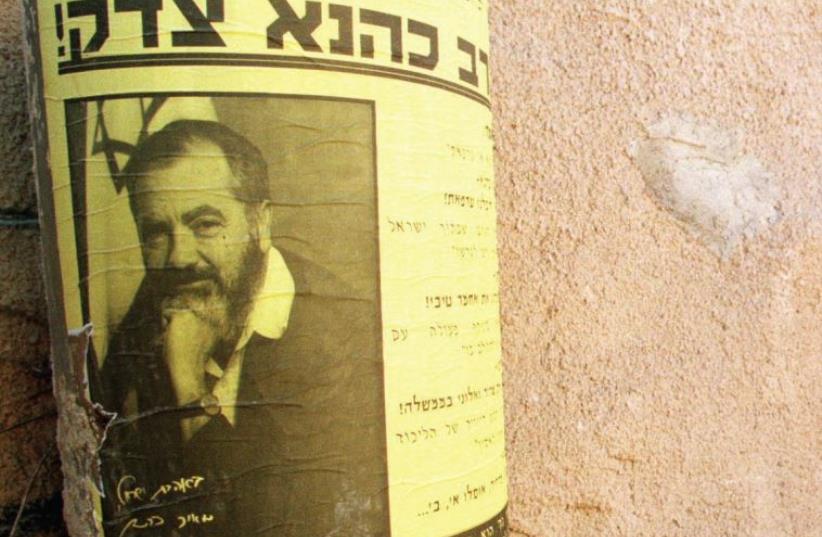 The late rabbi Meir Kahane, pictured here on a poster.
(photo credit: REUTERS)
Advertisement
Otzma Yehudit now seems likely to get into the Knesset, thanks to the unrelenting efforts of Prime Minister Benjamin Netanyahu.
Thanks to Netanyahu, Otzma Yehudit, whose name means “Jewish Power,” has a real shot. This is a party whose leaders are proud disciples of Rabbi Meir Kahane, whose party was banned from running for the Knesset in 1988 on grounds of racist incitement.Kahane advocated for the expulsion of most Arabs from Israel, and for those who remained to be second-class citizens under a theocracy. He was also involved in planning violent attacks on Palestinians.
More recently, three of the party’s four leaders – Baruch Marzel, Benzi Gopstein and Itamar Ben-Gvir – have been arrested for incidents related to violence against Palestinians and left-wing activists. They’ve posted photos of Arab MKs with nooses around their necks and held parties to celebrate Baruch Goldstein, the Kahane follower who killed 29 Palestinians in Hebron in 1994. They have the political acumen to keep former MK Michael Ben-Ari – an archaeology professor who shares their views but has a cleaner record – at the fore.
The Supreme Court has repeatedly upheld their right to run, so this is no longer a free speech battle. Instead, it’s a question of Netanyahu pushing for weeks to get Otzma into the Knesset, even making far-reaching commitments to Bayit Yehudi, and Bayit Yehudi cooperating with Otzma.
Why would Netanyahu want this party in the Knesset? Why did his spokesman release almost daily statements calling for it to unite with Bayit Yehudi? Yes, Netanyahu is right-wing, and yes, he’s willing to play dirty when there’s a political need. But there is a massive ideological gap between the Likud, a party built on liberal values together with nationalism, and a hard-right party.
The answer is all about the numbers.
In the previous election, Otzma, which ran under the name “Yahad” and was led by former Shas leader Eli Yishai, came very close to passing the 3.25% electoral threshold – and tens of thousands of right-wing votes went down the drain.
Recent polling shows that Otzma, which is not running with Yahad this time, is worth two to three seats.
But now, Otzma is not the only right-wing party that’s hovering near the threshold. Bayit Yehudi, Kulanu and Yisrael Beytenu are all in that zone, albeit from above the threshold, not below it.
And this has been keeping Netanyahu up at night.
If too many right-wing votes go to parties that don’t make it into the Knesset, his victory will be far less assured than it seems from the polls. Netanyahu not only needs to be able to form a coalition; before that can happen, he needs a majority to recommend him to the president. A merger will make that a much more likely scenario by adding a couple of Knesset seats to the right-wing bloc.
And that’s the meaning of the term “technical bloc” that’s being thrown around to describe this move. Bayit Yehudi, National Union and Otzma Yehudit are likely to run as one list for the Knesset. But after April 9, they plan to break up, with Bayit Yehudi and National Union as one faction, Otzma as itself. This way, Bayit Yehudi and National Union can get Netanyahu as prime minister but not really be together with Otzma, whose ideology and behavior they oppose.
Of course, there are a few problems with the plan. First of all, if this is so important to Netanyahu, he could have brought Otzma into the Likud. The plan’s defenders argue that polls showed adding Otzma to the Likud list would not have brought in more votes. Also, there is some logic to voters for the most extreme right-wing party feeling comfortable voting for Bayit Yehudi, which is both religious and right-wing, but not for the Likud, which has a broader tent.
Then there’s the issue that many of Bayit Yehudi’s votes will be from Otzma supporters –  perhaps votes worth more than the one seat Otzma would be likely to get. And that’s a harder pill for Bayit Yehudi to swallow. Some of the party’s top candidates have spoken out against the merger, saying not only is it an ideological issue, but it will alienate the base and send traditional Bayit Yehudi voters to the New Right.
Netanyahu’s constant involvement in Bayit Yehudi is probably very amusing for New Right leaders Naftali Bennett and Ayelet Shaked. The prime minister convincing prominent religious-Zionist Rabbi Haim Druckman to appeal to Bayit Yehudi’s leadership, much like he did several months ago when Druckman asked Bennett not to resign, is reassuring for the duo that left Bayit Yehudi in part to build a stronger right-wing front that can stand up to pressure from Netanyahu.
Now we’re left with the question of what a Knesset that includes Otzma Yehudit will look like.
We have an answer from the years 2009-2013, when Ben-Ari was in the National Union, running on the Kahanist ticket within that bloc. The truth is, with the exception of the occasional stunt – like taking African migrants to a fancy swimming pool in north Tel Aviv – he didn’t stand out all that much. He wasn’t very effective, and many other MKs didn’t want to cooperate with him. Being a small party in the opposition doesn’t let you get much done; even more so if you’re a one-man faction.
When it comes to post-election realities, it’s more a matter of symbolism than actual concern that Kahane-style policies will be enacted. Will Netanyahu’s alignment with Otzma be seen in the practical terms by which he has been presenting it, or will this taint him as someone open to giving power to Kahanists?