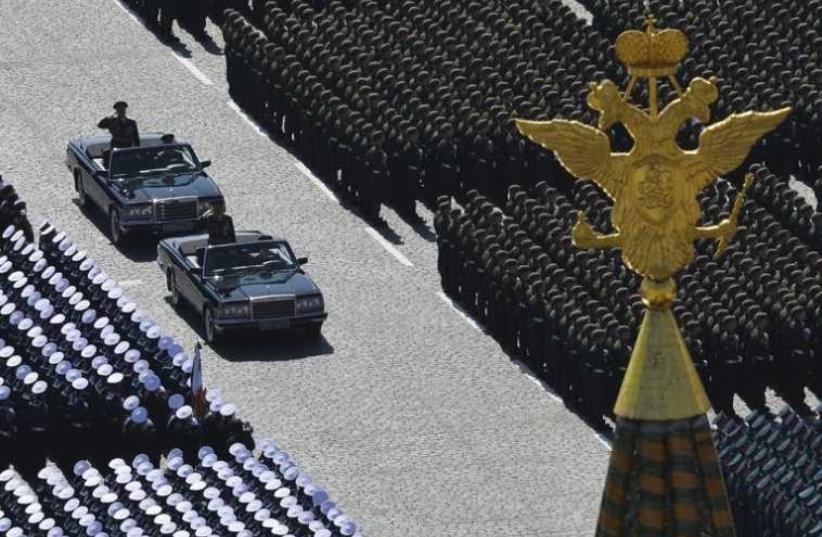 Russian Defense Minister Sergei Shoigu (standing in the first car) and Colonel-General Oleg Salyukov (second car, standing), Russia's Army Commander and Victory Parade Commander review troops at the beginning of the Victory Day parade at Red Square in Moscow
(photo credit: REUTERS)
Advertisement
Russia has already started delivering S-300 surface-to-air missile systems to Syrian forces, Russian Foreign Minister Sergei Lavrov said over the weekend, with Prime Minister Benjamin Netanyahu telling CNN that the move was “irresponsible.”The measure had been taken following the downing of the Russian IL-20 reconnaissance plane over Syria, Lavrov told reporters during a Friday press conference on the sidelines of the UN General Assembly in New York.“As President [Vladimir] Putin said, after that incident... the measures that we will take will be devoted to ensuring 100% safety and security of our men,” he said.According to public broadcaster KAN, Syria paid Russia a billion dollars for the anti-missile system, which will make it much more difficult for Israel to launch defensive air strikes against Iranian-linked targets in that country, as it has done over the last few years.Netanyahu spoke with Putin about the S-300 delivery to Syria before departing for New York to address the UN last week and he is expected to speak with him next week, after he returns to Israel on Sunday.He also spoke with US President Donald Trump about Syria and the S-300 sale when the two met on Wednesday.Israel has insisted it will continue to act in Syria and rejected all charges that it had caused the downing of the Russian plane.At the General Assembly on Saturday, Syrian Foreign Minister Walid Muallem threatened to push Israel out of the Golan Heights, which it captured from Syria during the Six Day War in 1967.
“Israel continues to occupy a dear part of our land in the Syrian Golan and our people there continue to suffer because of its depressive and aggressive policies,” he said.“Israel even supported terrorist groups that operated in southern Syria, protecting them through direct military intervention and launching repeated attacks on Syria territories.“Just as we liberated southern Syria from terrorists, we are determined to liberate fully the occupied Syria Golan to the lines of June 4, 1967,” he said.He called on the UN to enforce resolutions that called for a withdrawal to those lines. Muallem also called on US, Turkish and French forces to immediately leave Syria.In discussing the S-300 delivery with CNN, Netanyahu said he had confirmed with Putin the continuation of the deconfliction agreement, which is an understanding that allows Israel and Russia to operate militarily in Syria without endangering either of their armies.“But at the same time, I told him very respectfully and very clearly that Israel will do, will continue to do what it has to do to defend itself.”He noted that the Iranians, Hezbollah and Syrian forces operate in Syria, as do US coalition aircraft, Russian aircraft and Israeli aircraft.“Through this mess, we’ve been able for three years to avoid any clash between... Russian and Israeli forces. I think there’s a desire on both our part and Russia’s part to avoid a clash,” he said.Syrian Deputy Foreign Minister Faisal Mekdad said last week that “Israel, which got used to carrying out many attacks under different pretexts, would have to recalculate and reconsider before attacking again.”The issue of the S-300 was sparked after 15 Russian servicemen were killed when an IL-20 was hit by a Syrian anti-aircraft missile off the coastal city of Latakia. Moscow has placed the blame for the incident solely on Israel and has accused the IDF of having endangered the lives of personnel in Syria during other military operations.It led to one of the lowest points in the relationship between Jerusalem and Moscow in years.
A high-level military delegation led by Air Force Commander Maj.-Gen. Amikam Norkin was sent to Moscow, in addition to Netanyahu speaking with Putin.Following the downing of the jet, Moscow announced it would supply Syria with the advanced S-300 missile defense system and impose electronic countermeasures over Syria’s coastline, which would suppress satellite navigation, onboard radar systems and communications of warplanes attacking targets on Syrian territory.Last week Russia’s Izvestia News reported that the first set of the Russian electronic systems have been sent to Khmeimim airbase in Latakia on a Il-76 plane would be used by Russian forces stationed there. According to the report, Russian President Vladimir Putin notified Syrian President Bashar al-Assad about the transfer of the systems on Monday during a phone call.According to Russia’s Kommersant newspaper the supply of the S-300 would see four batteries sent to Syria in the next two weeks and another possible six to eight sent at a later date.On the sidelines of the UNGA, Muallem met with his Iranian counterpart, discussing the implementation of the Russian-Turkish memorandum on the creation of the demilitarized zone in Syria’s Idlib, the Russian Sputnik news agency reported.“The discussion revolved around the latest meetings between the guarantors of the Astana process, the implementation of the Sochi agreements and the constitutional commission. The sides agreed to continue consultations, cooperation and coordination,” the Syrian Foreign Ministry said according to Sputnik.The Russian-Turkish deal has, for now, averted a full-scale Syrian government offensive in Idlib, which along with adjacent areas of the northwest is the rebels’ last major foothold. The agreement requires “radical” insurgents to withdraw from a demilitarized zone along the frontlines by October 15.

Juliane Helmhold contributed to this report.