Following a car chase, a 60-year-old Jewish man from Tel Aviv was found in the trunk, hands bound with multiple stab wounds. 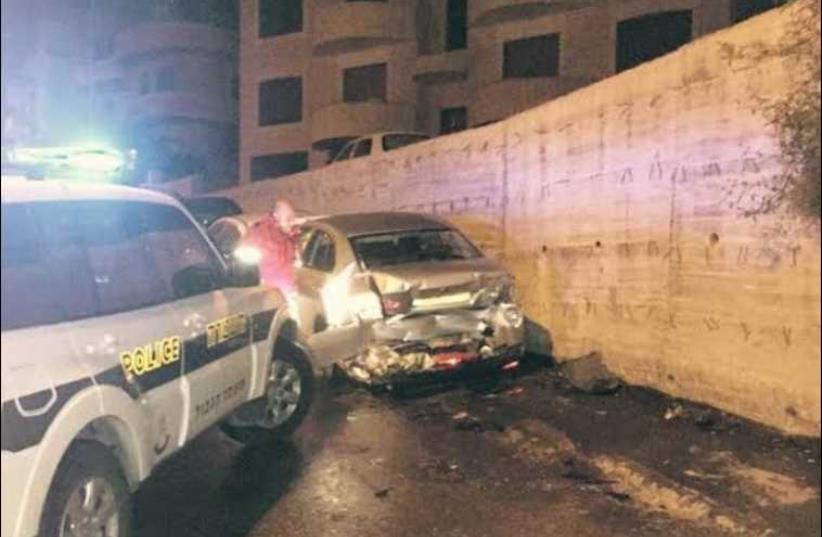 A Jewish man was found bound and stabbed in the trunk of a car in A-Tur, April 24
(photo credit: POLICE SPOKESPERSON'S UNIT)
Advertisement
A 60-year-old Jewish man from Tel Aviv was found bound and stabbed in the trunk of a car in A-Tur, an Arab neighborhood in east Jerusalem, on Thursday night.During an overnight patrol in the area, police officers spotted a suspicious car at a check point, and approached the vehicle for inspection. The driver then took off and a police chase ensued. The car entered an alley, hit several parked cars, and came to a stop. The police ran towards the car and arrested the driver while another passenger fled on foot. The passenger was chased down and arrested as well. The boys, aged 19 and 20 are residents of A-Tur.A police officer began to search the suspicious vehicle when he heard cries for help coming from inside the car. Upon further inspection, the Jewish man was found in the trunk, hands bound with multiple stab wounds.The police called in MDA paramedics who transported the victim to the Hadassah University Medical Center in Jerusalem''s Ein Kerem, fully conscious and in moderate condition. According to Police District Commander Chaim Shmueli, an investigation has been opened regarding the incident. "There is no doubt that the vigilance and determination of the officers rescued a human life," he said. According to a police statement, the victim met the teens in Tel Aviv where they asked him for help finding food and a place to stay. When the Jewish man allowed them into the vehicle, they stabbed him and put him in the trunk of his own car, bound and gagged. The assessment within the police is that the incident was criminal.