PM Netanyahu and Indian PM Narendra Modi tour Dor Beach on the third day of Modi's visit to Israel‏ (credit: GPO)
Advertisement
Indian Prime Minister Narendra Modi left Israel on Thursday afternoon after an historic three day visit to the country. Prime Minister Benjamin Netanyahu accompanied him to Ben-Gurion airport where a special ceremony took place in honor of the occasion. Modi now departs to Hamburg for the annual G20 meetings.Earlier in the day, he got a chance to see first hand some of Israel's newest technologies. Thursday morning, he toured desalinization plant north of Hadera and even rode together with Prime Minister Benjamin Netanyahu in a newly developed vehicle that can transform sea water into drinking water. The two leaders also took time to cool off from the heat by dipping in the Mediterranean.


Modi began the third and final day of his historic visit to Israel by paying respects at the Indian military cemetery in Haifa on Thursday morning.
Modi mentioned the 1918 Battle of Haifa on Wednesday, during statements he gave following his meeting with Netanyahu. “Around 150 kilometers from here, there is a slice of history in the city of Haifa in Israel that is very dear to my country,” Modi said while in Jerusalem. “This is the final resting place for 44 of the Indian soldiers who sacrificed their lives during World War I to liberate the city.”Modi's visit was the first by a sitting Indian premier to the country.Indian Prime Minister Narendra Modi gestures as he disembarks from his plane upon his arrival at Ben-Gurion International airport near Tel Aviv on July 4, 2017 (JACK GUEZ / AFP)Prime Minister Benjamin Netanyahu personally greeted Modi at Ben Gurion Airport Tuesday afternoon, along with the top tier of Israel's leadership – known as "segel aleph" – an honor afforded to only a few select leaders, such as US presidents and popes.Prime Minister Benjamin Netanyahu embraces visiting Indian Prime Minister Narendra Modi upon his arrival in Israel, July 4, 2017 (Haim Zach/GPO)From the airport, the two men drove to Mosha Mishmar Hashiva, near Beit Dagan, and visited the Danziger “Dan” flower farm, one of Israel’s leading floriculture companies, with approximately 80,000 square meters of state-of-the-art greenhouses specializing in reproduction of plants.
Modi's first stop on his visit highlighted that one of Israel's key interests in closer cooperation with India is its expertise in agricultural technology. They were joined there by Israel's Agriculture Minister, Uri Ariel.Indian Prime Minister Narendra Modi and Israeli Prime Minister Benjamin Netanyahu at the Danziger “Dan” flower farm (GPO) Modi then traveled to Jerusalem's King David Hotel, where he stayed, before making his way to Israel's Holocaust remembrance center Yad Vashem. Indian Prime Minister Narendra Modi described Yad Vashem as a "poignant reminder of unspeakable evil," following his tour of the museum on Tuesday. Netanyahu joined Modi on his tour, guided by Yad Vashem Chairman Avner Shalev. They visited the Hall of Names, participated in a memorial Ceremony in the Hall of Remembrance and toured the Children's Memorial.At the conclusion of his visit, Modi wrote in the Yad Vashem Guest Book: "I am deeply moved by my visit to the Yad Vashem Holocaust Memorial museum. It is as much a poignant reminder of the unspeakable evil inflicted generations ago as it is a symbol of the endurance and fortitude of the Jewish people. As we deal with conflict, intolerance, hatred and terror in our time, Yad Vashem serves as a mirror to society around the world. May we not forget the injustices of the past and its devastating toll on humanity and remembering the past. We may empower our children to make compassionate, just and righteous choices for their future."ndian Prime Minister Narendra Modi laid a wreath in the Hall of Remembrance at Yad Vashem, July 4, 2017Modi visited the Prime Minister's Residence Tuesday evening where Netanyahu and Modi delivered statements before sitting down to an intimate dinner.The Indian prime minister started off his address calling Netanyahu "Yedid hayakar," or dear friend in Hebrew.President Reuven Rivlin welcomed Indian Prime Minister Narendra Modi to his official residence in Jerusalem on Wednesday, calling him “one of the greatest leaders of world democracies.”Indian Prime Minister Narendra Modi and President Reuven Rivlin hug upon Modi's arrival before their meeting in Jerusalem July 5, 2017 (REUTERS)
Modi, in turn, noted Israel’s friendship. “Israel is a real friend,” he said. “I have really felt that feeling of kinship. I feel absolutely at home here.”The two briskly traversed the red carpet and mounted a stage at the end of the main reception hall, where Modi signed the guest book. They then went into the president’s office for a 10-minute tête-à-tête before joining Modi’s waiting delegation and representatives of the media in a small reception hall.Thousands of Indians from across Israel attended an event at the Tel Aviv Convention Center for the Indian Diaspora community as part of the visit of Indian Prime Minister Narendra Modi on Wednesday evening.Dancers waved Indian and Israelis flags, and the audience were in high spirits, frequently cheering and chanting “Israel” and “India.” 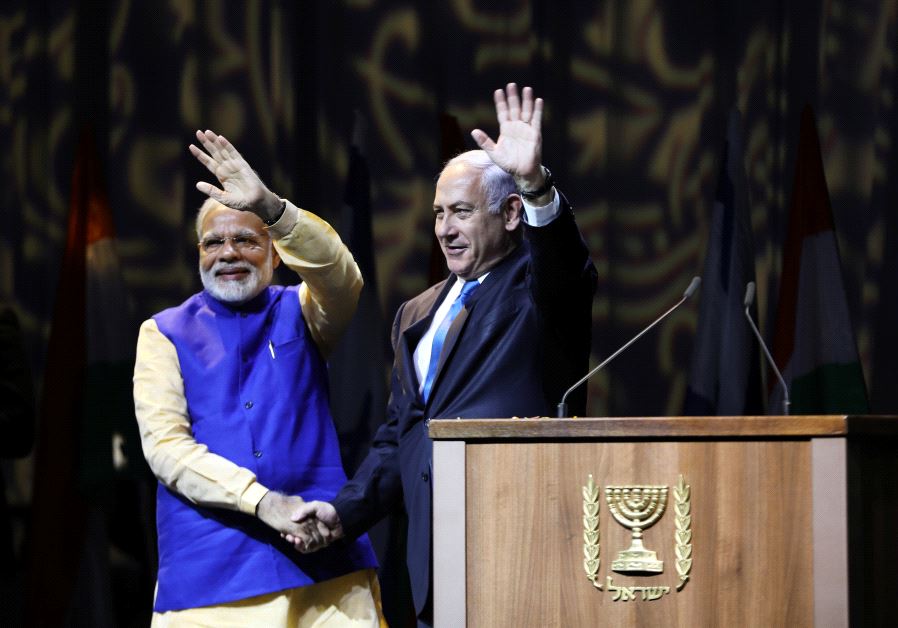 Indian Prime Minister Narendra Modi (L) and Israeli Prime Minister Benjamin Netanyahu shake hands as they wave to the crowd during a reception for the Indian community in Israel, in Tel Aviv, Israel July 5, 2017.The Diaspora community welcomed Modi with open arms and overwhelming enthusiasm, chanting his name as he came on the stage.At the end of a long speech, which he delivered in Hindi, he announced that he had eased the rules for applying for Overseas Citizen of India cards for Israeli citizens of Indian origin.“We have confidence in each other and friendship with each other,” Modi told the crowd.Herb Keinon, Tamara Zieve , Eytan Halon and Greer Fay Cashman contributed to this article.