Netanyahu: The Dimona nuclear facility will be named after Peres

"Only when I became prime minister and entered the nuclear facility did I understand its importance for Israeli security, which Shimon Peres established." 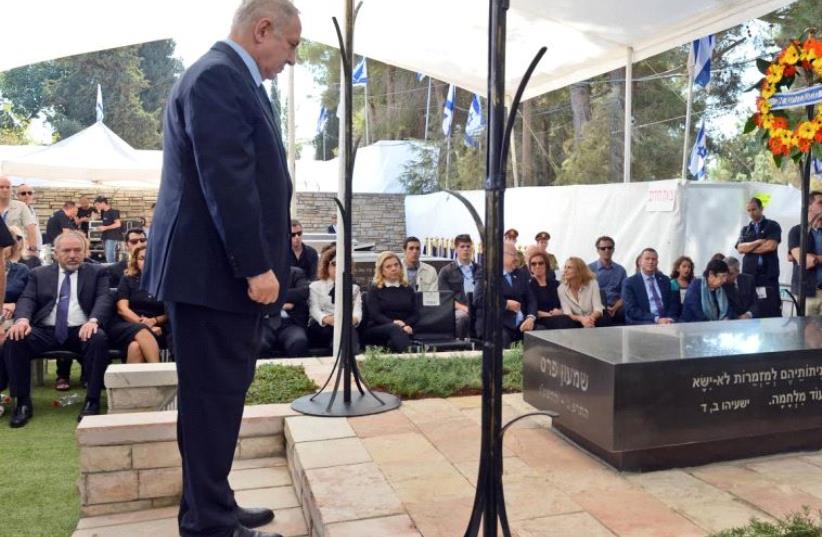 Prime Minister Benjamin Netanyahu at Former Presudent Shimon Peres's grave
(photo credit: HAIM ZACH/GPO)
Advertisement
Israel marked 30 days since the death of former President Shimon Peres with a traditional Jewish 30 day memorial ceremony and tombstone unveiling on Friday. Friends and family gathered at Mount Herzl in Jerusalem and speakers included Prime Minister Benjamin Netanyahu and President Reuven Rivlin, as well as Peres' grandchildren.Rivlin spoke of Peres' contributions to the world stating, "In the days following your passing, more and more stories have come out about your great contribution to Israel and even the world.""Above all your spirit is what made you great," Rivlin added. Among Peres' contributions was Israel's nuclear facility. As director-general of the Defense Ministry in the mid 1950s, Peres was instrumental in building a close relationship with France, which agreed to sell a nuclear reactor to Israel. France also provided the technical knowledge and equipment needed to turn the young Jewish state into the world’s sixth nuclear power. Peres played another pivotal role in securing other key components needed for the program, all under the nose of the Americans.Netanyahu announced his plan to name the Dimona nuclear facility after the late president stating,"In the years in which I was an officer in the IDF, we trained and did a navigation near Dimona and were told not to go there.""Only when I became prime minister and entered the nuclear facility did I understand its importance for Israeli security, which Shimon Peres established.""I have given a directive to change the name of the nuclear facility in Dimona to the 'Shimon Peres nuclear center,'" stated Netanyahu. Netanyahu also read from a letter that his father had sent to Shimon Peres two days after the Entebbe mission in which Yoni Netanyahu was killed. The letter spoke of his appreciation and admiration for Peres, who was Israel's defense minister at the time. "We missed an opportunity, each of us was fortified in his political position and only in the last years did our connection really blossom and strengthen," Netanyahu stated. Mika Almog, granddaughter of Peres, spoke of the hope that Peres brought to Israel. Almog stated, "The fear that your passing is an end to hope, to Israel as a nation looking for peace, a nation looking for leaders who are compassionate, not just looking to win elections or arguments.""Shimon Peres's passing is a commandment not to lose hope."Peres was buried between former prime ministers Yitzhak Shamir and Yitzhak Rabin. Herb Keinon contributed to this article.