Despite changes in the world since the 1990s attacks in Buenos Aires, Iran has stayed loyal to its theme of terror, Benjamin Netanyahu stated at the site of Argentinian terror attacks.

Israeli Prime Minister Netanyahu speaks at the AMIA Jewish community center in Buenos Aires, Argentina
(photo credit: HANDOUT/REUTERS)
Advertisement
BUENOS AIRES – Speaking at the site of the Israeli Embassy in Buenos Aires that was destroyed by a terrorist blast in 1992 and never rebuilt, and at the reconstructed AMIA Jewish community building nearby that was attacked in 1994 but reconstructed, Prime Minister Benjamin Netanyahu’s message on Monday was the same: Terrorism must be fought, and Iran – responsible for the two attacks in Argentina – remains the world’s leading sponsor of terrorism.Both those attacks, Netanyahu said at a brief ceremony at the site of the destroyed embassy, which today is a memorial plaza, “taught us that we must not be deterred by the ongoing struggle against the fanatical murderers.”
Prime Minister Benjamin Netanyahu pays tribute to bombing victims on arrival to Buenos Aires, September 11, 2017. (Reuters)
Coincidentally, his speeches fell on September 11, and during his remarks he paid tribute as well to the victims of the attacks in the US 16 years ago.Before Netanyahu’s speech, Miri Ben-Zeev, whose husband, Eli, was a security guard murdered in the embassy attack, recalled the day when her husband was killed in “the Paris of South America.” Four Foreign Ministry employees were killed in the attack, and the representatives of the families of three of them were invited to the ceremony and accompanied the prime minister on his flight from Israel.An additional 25 Argentinean civilians were also killed, and 242 civilians were wounded.Netanyahu, during his speech at the AMIA building, praised Argentinean President Mauricio Macri for reopening the investigation into Iran’s involvement in the attacks. Macri closed a commission set up by the previous government with Iran’s participation to investigate the incidents, something that Israel felt was an effort to whitewash Iran’s responsibility.“Iran initiated, planned and carried out the terrible attacks through its proxy, Hezbollah,” Netanyahu said. “The time has come to impose full and complete responsibility on Iran. It is time to do justice to the victims. It is time denounce the accused.”At the site of the embassy attack, the prime minister said Israel was determined to fight Iranian terrorism and is determined to prevent it from establishing itself on Israel’s border. 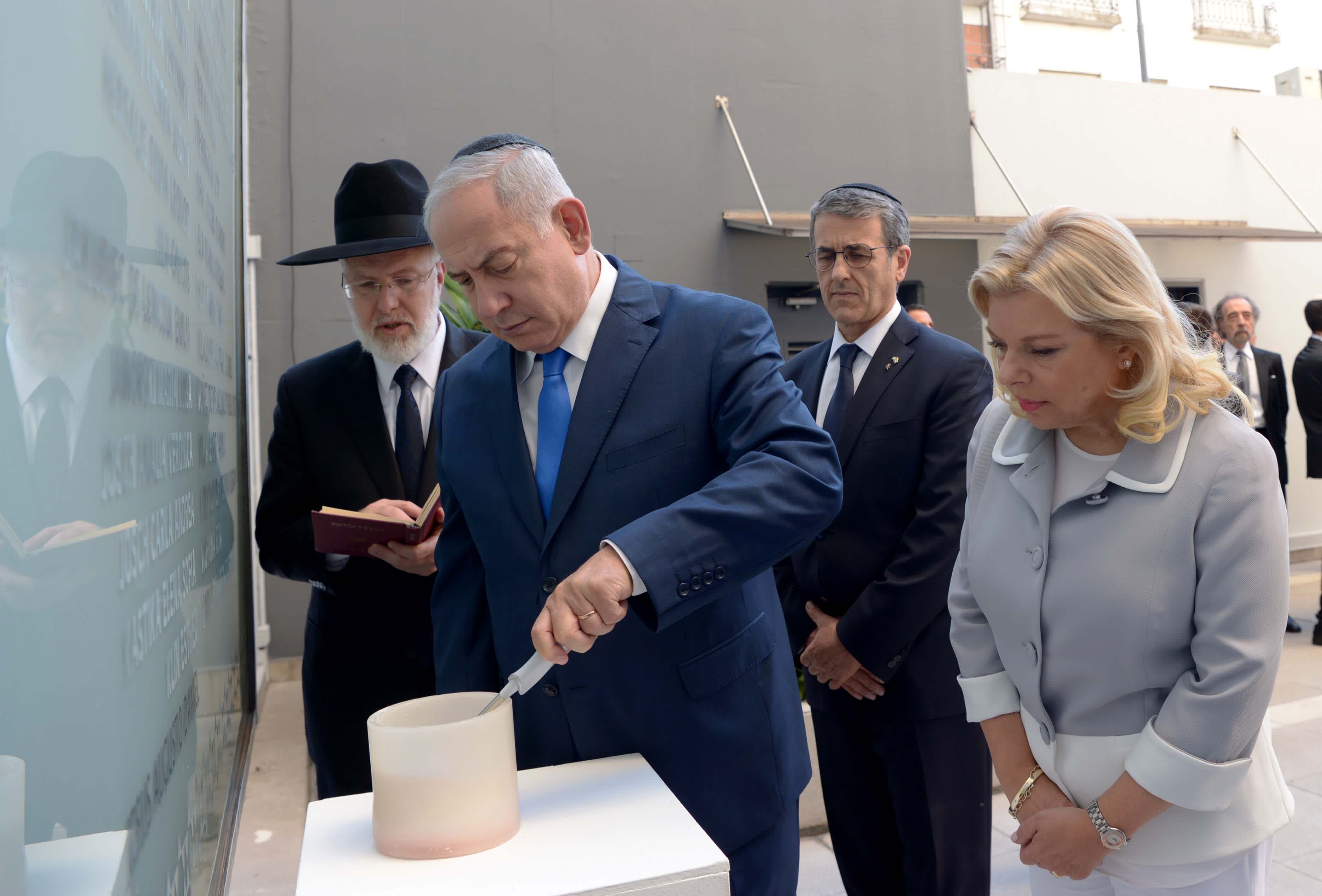 Prime Minister Benjamin Netanyahu and his wife, Sara Netanyahu at a memorial for the Buenos Aires embassy attack of 1992 with Argentinian President Mauricio Macri, September 11, 2017. (Avi Ohayon/GPO)
Prime Minister Benjamin Netanyahu in Argentina, September 11, 2017
Iran backs the terrorism of radical Shia Islam, he said, and Islamic State is now the address for radical Sunni terrorism. As the global campaign against Islamic State succeeds and the organization retreats, Iran is moving into the vacuum, he warned.“It is incumbent on all civilized countries to fight terrorism in general, and Iran’s terrorist attacks in particular, the same Iran that brought about these two criminal crimes,” he said.“Buenos Aires, New York, Jerusalem, Paris, Barcelona, Brussels – no country is immune to the terror of radical Islam, and since the threat is shared, the solution must also be shared,” Netanyahu said. “We must face it together without fear, without hesitation. I believe that if we act in this way, the victory of civilized people will be assured over the representatives of barbarism.”Iranian terrorism is even more barbaric than the violence of the Middle Ages, Netanyahu said, because even in the Middle Ages ambassadors were not targeted, and if they were, it was considered “a special crime.”“Even in the days of barbarity they avoided hurting the ambassadors, but Iran also hurt the embassy and created a new standard that we cannot accept,” he said.