“We won’t accept Trump’s deal of the century regardless of the price.” 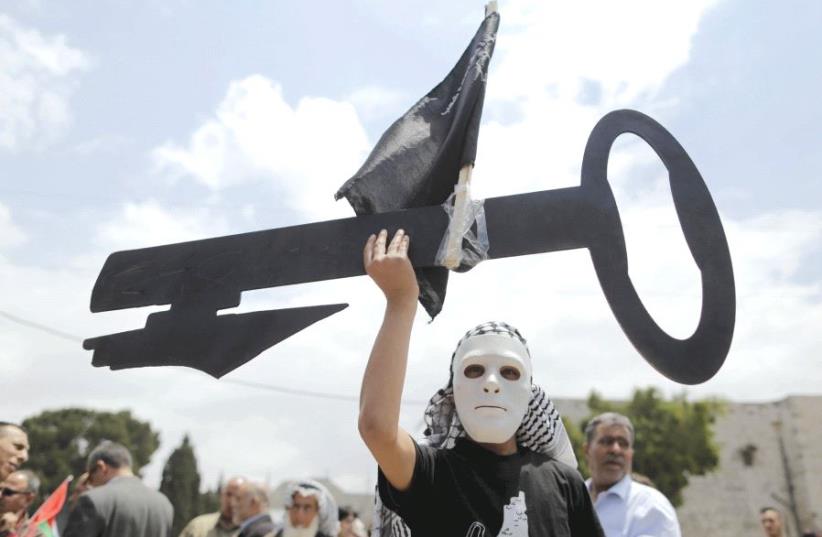 A Palestinian wearing a mask holds a cut-out of a key during a rally ahead of the ‘Nakba Day’ in Bethlehem in 2015
(photo credit: REUTERS)
Advertisement
Palestinians are planning to mark Nakba Day – “Catastrophe Day,” the Gregorian calendar day for Israeli Independence Day – with strikes and rallies in the West Bank and Gaza Strip on Wednesday.On the eve of the occasion, Palestinians reiterated their opposition to US President Donald Trump’s upcoming plan for peace in the Middle East, also known as the “deal of the century.”Palestinian factions in the Gaza Strip called for a general strike on Wednesday in the Hamas-ruled coastal enclave. The strike will include all schools, universities and colleges there, they said.The factions also called on Gazans to protest near the border with Israel. Gaza’s Hamas-controlled Health Ministry said that it has placed all medical teams on high alert ahead of the protests.On Tuesday, thousands of Palestinians participated in a rally marking Nakba Day in front of the offices of the United Nations Relief and Works Agency for Palestinian Refugees (UNRWA) in the Gaza Strip. The rally was held under the banner: “From the ashes of the ‘Nakba’ to the embodiment of the right of return, down with all the conspiracies.”Ahmed Abu Holi, member of the PLO Executive Committee and head of the “National Committee for Commemorating the Nakba,” said in a speech at the rally that the Palestinians will not accept Trump’s peace proposal.The plan, he said, “will not pass regardless of the price the Palestinians would pay.”“The issues of Jerusalem and the refugees are not for sale or bargaining,” the PLO official said. “The Palestinian people will not sell their rights and principles in return for dollars, and will not compromise on the payments to the families of martyrs and prisoners. We will not surrender to blackmail.”Hamas leader Ismail Haniyeh said on Tuesday that the Palestinian cause was going through “its most dangerous phase in wake of the ‘deal of the century.’”Talal Abu Zarifa, a senior official with the PLO’s Democratic Front for the Liberation of Palestine and member of the National Commission for the Great March of Return (the weekly Friday protests along the Gaza-Israel border), called for mass demonstrations near the border on Wednesday. He urged Palestinians to “demonstrate discipline and commit to the rules of safety and security” so as not to allow Israel to launch another “aggression” against the Gaza Strip.Abu Zarifa said that Palestinians were marking Nakba Day this year on the eve of the announcement of Trump’s deal of the century, “which aims to end the issue of the refugees and their rights, and eliminate the Palestinian cause.”Whatever the US administration does, he added, “It will not be able to change the rights and principles of the Palestinians.”In Ramallah, PA Prime Minister Mohammed Shtayyeh said on the eve of Nakba Day that the Palestinians are fighting several wars, most of which have been imposed on them. “Israel is waging a war of geography on us by confiscating our land on a daily basis,” he said. “There are 711,000 settlers who make up 24% of all those living in the West Bank alone. We are also facing a war of demography to expel our people from Jerusalem. Some 112,000 Palestinian residents of Jerusalem live on the other side of the [security] fence.”Shtayyeh was referring to Jerusalem residents who hold blue identity cards but live in villages and neighborhoods in Areas B and C of the West Bank outside of the city’s municipal boundaries.The Palestinians, he added, are also facing a US-backed financial war aimed at blackmailing them. “This US administration and its ally, Israel, believe that it would be able to defeat us with a financial siege and other measures, including the closure of the PLO diplomatic mission in Washington, and cutting aid to UNRWA, in order to force us to accept ‘the deal of shame,’” he added, referring to Trump’s yet-to-be-published peace plan. “The next three months are going to be the most difficult ones for the Palestinians.”PLO Executive Committee member Hanan Ashrawi said in a statement marking Nakba Day that the US administration’s unilateral measures against the Palestinians are a new “nakba.” She called for a “multilateral international gathering to confront the US-Israeli alliance and schemes, including the so-called American peace plan. We count on peace lovers all over the world to support our just cause and human rights in the face of the fascist forces led by the Trump administration and [Prime Minister Benjamin] Netanyahu.”The PA ruling Fatah faction said that as they commemorate Nakba Day, the Palestinians are more determined to “uphold their principles and legitimate rights, including the right of return, self-determination and the establishment of an independent Palestinian state with east Jerusalem as its capital.”Fatah also voiced full support for PA President Mahmoud Abbas’s rejection of the “deal of the century” and said the plan is doomed to failure. “The deal of the century is not just a threat to the Palestinian people and their just cause, but to the whole Arab nation, because it’s the new address for the new expansionist Zionist colonialist project.”