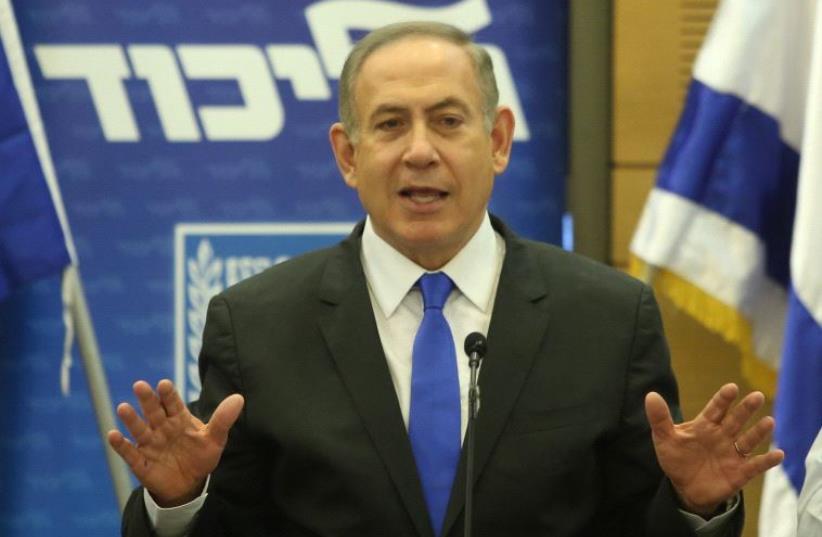 Benjamin Netanyahu
(photo credit: MARC ISRAEL SELLEM)
Prime Minister Benjamin Netanyahu was questioned under caution by police on Thursday for the second time this week, over allegations that he received illegal gifts from Israeli and foreign businessmen and a second undisclosed case that police are keeping under wraps. The questioning took about five hours according to police, ending late Thursday night, and another unnamed individual was also questioned in the last two days regarding the investigation.In a statement scant on details, the Lahav 433 National Fraud Unit said that they could not provide additional information due to concerns of “disrupting the investigation”. Experts believe investigators will question the prime minister at least one more time.On Thursday night, Channel 2 reported that Israeli producer Arnon Milchan had given Netanyahu cigars worth tens of thousands of shekels over seven or eight years.Netanyahu’s side reportedly responded that the cigars were a gift friend to friend and perfectly legal. To allegations that Milchan wanted positive treatment for Channel 10, where he owns shares, from Netanyahu, the prime minister’s defenders pointed out that he has tried numerous times to shut down the channel.Amorphous allegations relating to Sara Netanyahu were dismissed as having been so irrelevant that police had not asked about them.Allegations about illegal transfers of value to Netanyahu worth larger amounts of money, some of which were reported first by Haaretz, have either been denied or defined as a loan if they turn out to be true, according to Netanyahu’s team, Channel 2 reported.Netanyahu was questioned on Monday night for around three hours in connection with the allegations, some of which include suspicions that he received improper gifts worth hundreds of thousands of shekels from businessmen in a manner that breached his duty of trust as a public servant.Both times, the prime minister has been questioned by members of the police’s National Fraud Unit at his residence on Balfour Street in Jerusalem.Dep.-Ch. Koresh Barnur, the head of the National Fraud Unit, which is part of the Lahav 433 anti-corruption unit, has led the questioning of the country’s most powerful man.After the first interrogation session, the prime minister sought to deflate the accusations against him. “The long years of daily persecution against me and my family turned out yesterday to be nothing,” the prime minister said in a Tweet on Tuesday and repeated his mantra: “There will be nothing, because there is nothing.”Netanyahu’s attorney Yaakov Weinroth told Channel 2 on Tuesday that the prime minister could be “very relaxed” in the face of the criminal investigation. The report also said that Netanyahu’s associates admitted that he received gifts, however, they contended that the gifts were negligible and given in friendship – not in an unlawful attempt to influence the prime minister.Attorney-General Avichai Mandelblit issued the first official statement regarding the criminal investigation late on Monday night – confirming that the probe into Netanyahu’s dealings had become a full-fledged criminal investigation and that the prime minister had been accused of ethics breaches.The investigation began from a preliminary review in July of multiple affairs. After Monday’s questioning, four of these affairs were closed.The four closed cases were that Netanyahu ran an unreported, illegally financed shadow campaign in the 2009 general election; that he rigged the Likud primary results in 2009; that he received gifts and benefits from wealthy people while overseas; and that he double-dipped in payments for flights overseas – allegations known as “Bibi Tours.”The Bibi Tours allegations have particularly haunted Netanyahu since they broke in 2011, when Channel 10 reported that a series of flights Netanyahu took in the late 1990s and early 2000s with his wife, Sara, were allegedly illegally paid for by wealthy associates.Netanyahu referred to these allegations in a tweet on Tuesday: “Bibi Tours – nothing! Claims of falsifying primary results – nothing! Claim of illegally funding elections – nothing! Claims of receiving benefits abroad and payment for flights – nothing!” On Monday, the prime minister showed confidence that the investigation into graft allegations would lead nowhere.There is allegedly a second, more serious case against Netanyahu, the details of which remain unknown. Channel 2 has alluded to the possibility of the more severe charge being related to an attempt to receive a bribe, though such a charge is notoriously hard to prove because it means that no bribe was received.Likud MKs have closed ranks around the prime minister, pronouncing his innocence, while Yesh Atid chairman Yair Lapid said the Netanyahu was innocent until proven guilty.In the opposition, Zionist Union chairman Isaac Herzog said on Monday that he was “not happy for [Netanyahu’s] misfortune.” Herb Keinon contributed to this report.