Police seek masked Israelis who beat up Palestinian in Hebron

An IDF soldier had called the Palestinian man over to check his papers, when two masked Israeli men in white T-shirts appeared and began physically attacking the man. 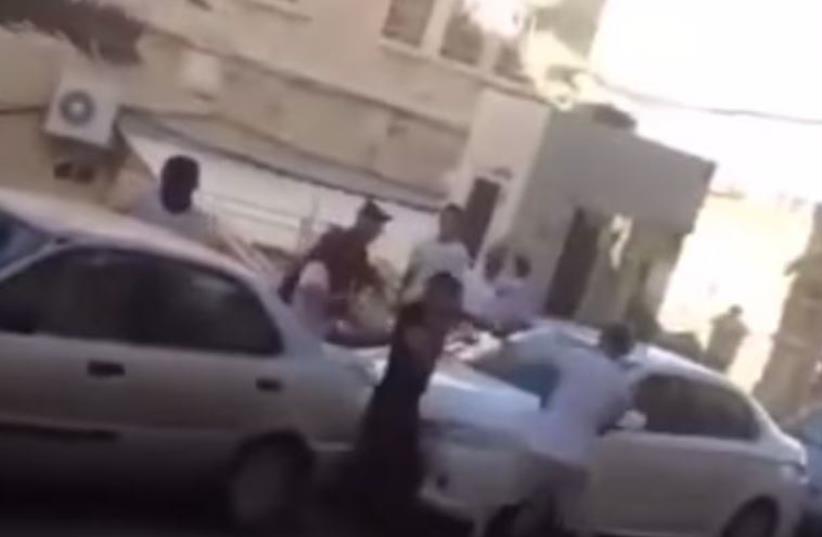 Settlers attacking a Palestinian in Hebron
(photo credit: screenshot)
Advertisement
The Judea and Samaria police are looking for the two Israelis, presumed to be settlers, who on Saturday afternoon beat up a Palestinian man in Hebron near the Beit Hadassah complex on Shuhada Street.An IDF soldier had called the Palestinian man over to check his papers because he appeared suspicious, and in the midst of this process, two masked Israeli men in white T-shirts appeared and began beating up the Palestinian man.The incident was caught by Palestinians on video and uploaded to YouTube.The soldier can be seen unsuccessfully trying to intervene and, after 30 seconds, the two Israelis ran away with the soldier giving chase. The Palestinian man was able to escape into a nearby apartment building and later was treated by the Red Crescent.According to the IDF, the two Israelis also threw a teargas canister at the Palestinians.Hebron community spokesman Noam Arnon said he believed the attack occurred after the Palestinian man came very close to Beit Hadassah.On Thursday evening, five American yeshiva students were attacked by a mob after they took a wrong turn into a Palestinian neighborhood while trying to reach the Cave of the Patriarchs.Palestinians threw stones and Molotov cocktails at their car, but the young men were able to escape the vehicle and were rescued by a Palestinian man who took them into his apartment and called for help.