A Bulgarian love affair with Israel

Former Bulgarian president plants a tree in memory of his son in Israel. 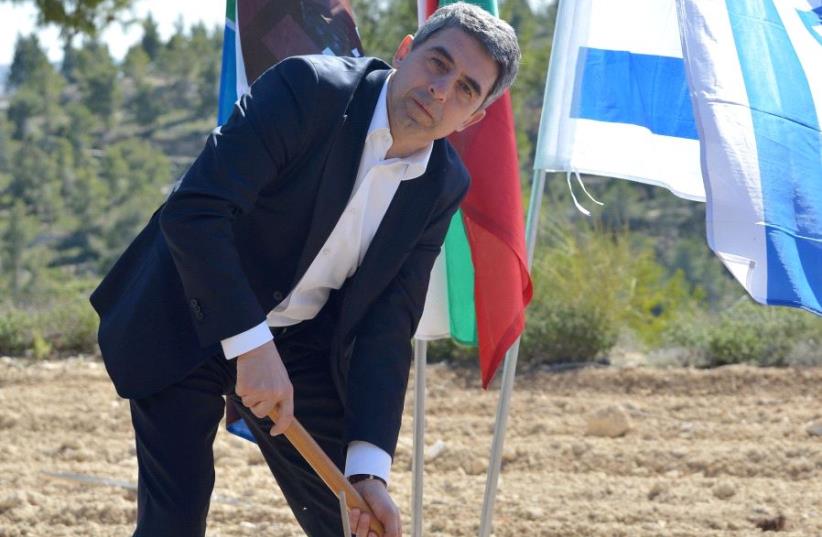 Former Bulgarian president plants a tree in Jerusalem
(photo credit: JNF)
Advertisement
Former Bulgarian president Rosen Plevneliev planted a carob sapling on a Jerusalem hilltop this week in memory of his 14-year old son, Philip, who died in August 2015 of heart failure.The ardent lover of Israel figuratively placed a piece of his heart in the rocky soil, to mark his deep bond with the country and the strong ties between the Bulgarians and the Jewish people.It is also a sign of his friendship with Israeli businessman Eli Egosi, who upon hearing of Philip’s death, had immediately planted a tree in the Yad Kennedy forest, because “there were no words” that could be said to comfort that kind of sorrow.This week the two men sat together in the lobby of a Jerusalem hotel and spoke with The Jerusalem Post.“I love Israel. I love the people. I love the spirit,” Plevneliev said.When he was elected in 2012 at age 48, he was the youngest president in the European Union. He left office just last month, at age 52, after losing reelection to Rumen Radev.But the smiling politician hardly considers that he has left politics or diplomacy as he eyes other roles in his country or in the European Union, of which he is a strong proponent as the best safeguard against another war in Europe.“I’m fighting for this project, because I want peace,” Plevneliev said.As he studies his options, he is writing a book about his understanding of international affairs and development in the year 2017, which he has called “cold peace time.”It’s an age in which innovators and entrepreneurs are leading, rather than the politicians. The book is based on his experience as president and his time spent with some of the top world leaders, including former US president Barack Obama and German Chancellor Angela Merkel.Israel plays an important role on the international stage and if a politician “wants to look to the future, he has to come to Israel, not once, but many times,” said Plevneliev, smiling.As a relatively new country with cutting edge entrepreneurship that also boasts an ancient history, Israel is attractive to Bulgaria, which is one of the older countries in Europe, with a Jewish community whose roots date back more than 1,300 years.“Israel is a very special country in my heart. We feel very strongly attached to Israel. We share the same destiny,” said Plevneliev.“We are so proud of the amazing act of bravery during the Second World War, as the Bulgarian civil society, church and some politicians stood up for Jewish friends and they saved the lives of all the Jews in Bulgaria, more than 48,000 lives,” Plevneliev said.In recognition of his country’s actions during the war and the bravery of its leaders, Plevneliev was given the Friends of Zion Award in Jerusalem this week.The Friends of Zion Museum initiated the award in 2015, when former president Shimon Peres traveled to Dallas, Texas, to give the award to former US president George W. Bush.Last year it was awarded to Monaco’s Prince Albert II.During his four years as president, Plevneliev said, he was a strong supporter of Israel both in the United Nations and the European Union.He also spoke out strongly against antisemitism, he said.The Israeli and Bulgarian militaries work closely together, he noted, particularly in the area of counterterrorism.In his small country, located just a two-hour plane ride away from Israel, there has been only one terrorist attack, which occurred just six months after he became president.In July 2012, a suicide bomber with ties to Hezbollah and Iran attacked a bus of Israeli tourists outside the Burgas airport, killing five Israelis and their Bulgarian driver.“We were shocked. It was a heavy, brutal attack against a bus full of Jewish tourists and the Bulgarian driver, who was a Muslim.“I was the first politician to [arrive at the scene] 32 minutes after the attack.I was told by security services not to go there. I went there,” he said. “Ten Bulgarian ministers, we got together there in one hour,” said Plevneliev.“I went to the hospital [to see the wounded Israelis]. I remember people’s eyes and their strength. I spoke to them, I gave them my hand. I stayed for hours,” he said.The two security services worked together to hunt down the perpetrators of the attack, he said. Together with Israel, Bulgaria advocated to place Hezbollah on the EU’s list of terrorist organizations. Since then, he said, the number of Israeli tourists to Bulgaria has doubled.