This is not the first time a Green Party has targeted Israel. In 2015 the Green Party of the United States also supported a resolution that urged a boycott of Israeli academic institutions. 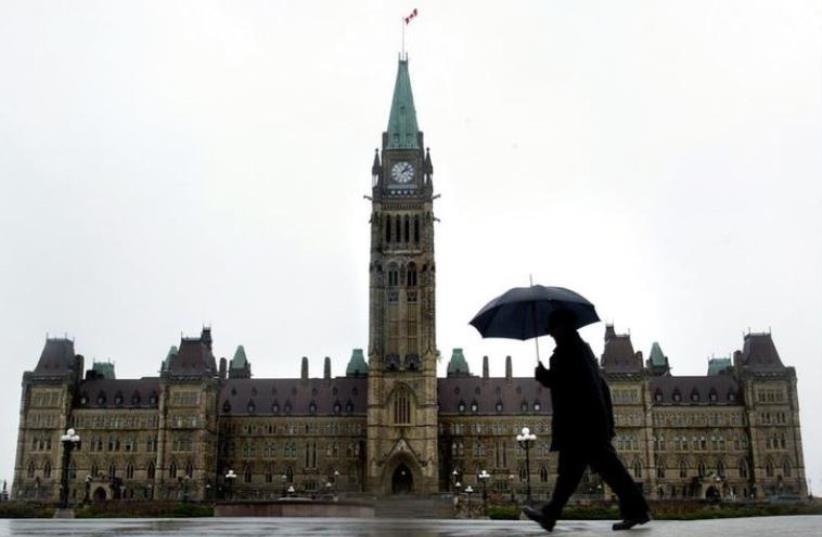 A pedestrian walks in the rain on Parliament Hill in Ottawa, Canada.
(photo credit: REUTERS)
Advertisement
It would seem natural for Canada’s Green Party, which supports social justice and sustainability, to support the Jewish National Fund, an organization widely recognized for its environmental contributions to Israel – but it’s not the case.Members of the Green Party sponsored two resolutions last month that target Israel: one urging the Canada Revenue Agency to revoke the JNF’s charitable status and another to support BDS in Israeli sectors that allegedly profit from occupied Palestinian territories.“Given the glut of environmental and human crises the world faces, it strikes us as absurd and inappropriate for Green Party members to negatively single out Israel or Israel-related matters as the primary subject for attention,” said Josh Cooper, CEO of JNF Canada. “They’re allowing an obsession with Israel to distract them from the Green Party’s valid environmental priorities.”The resolution regarding the JNF states that the organization is discriminatory against non-Jewish Israelis, that Ayalon Canada Park sits in occupied Palestinian territory and that it takes away the rightful land of Palestinians through the creation of parks and forests.The BDS-related resolution states that Israel is violating international law through its settlements in occupied Palestinian territory.“Tikkun olam teaches me that I must speak out when injustice occurs,” said Corey Levine, the Green Party member who initiated the JNF resolution. “I have a moral obligation to speak out when these injustices are a part of my community and are done in my name as a Jew.”Green Party members participated in an online vote that decided whether or not the resolutions would be discussed at a convention in August where party policy is decided. The members voted 61.5 per cent in favor of discussing the JNF resolution and 58.5 per cent in favor of discussing the BDS resolution.Depending on what happens at the convention, the party may shift its policies on these subjects, which would make it the only Canadian political party that supports BDS. The JNF as well as Independent Jewish Voices have been invited to speak at the convention.“I hope that this resolution brings an awareness of the realities of what really is behind Canada Park and how this is subsidized by Canadian taxpayers,” Levine said. “Second, I hope it brings an understanding that criticism of Israeli government policies and JNF actions does not constitute anti-Semitism.”Green Party leader Elizabeth May, who has attended JNF events and voted against BDS in the past, sponsored the JNF resolution after a discussion with a Palestinian man who said that his village was destroyed and then turned into the JNF-funded Ayalon Canada Park.May met with Josh Cooper the CEO of JNF’s Canadian branch and some of his staff members to discuss the resolutions. May described this meeting as productive and respectful and maintained that she does not support the BDS movement. May also recognized that she has some concerns over the JNF resolution, which she hopes to discuss further at the convention.“It would be irresponsible for the Green Party leadership to make Israel and JNF an issue based on falsehoods,” said Cooper.“Long before there was an environmental movement, there was JNF.”In response to these resolutions the JNF and the Center for Israel and Jewish Affairs (CIJA) launched a campaign that urged their supporters to write letters to May. The template letter calls these resolutions a “blacklist” of the JNF and condemns the party for supporting “the discriminatory, fringe BDS movement.”Over 7,000 people participated in the campaign. May responded to each of these participants with an email that emphasizes that the members of the Green Party have a right to try and change policy and that she has never raised human rights concerns about Israel in her time at parliament.“When a small core of activists manipulates the language of human rights in order to push an anti-Israel agenda, it’s incumbent upon us to point out to the party that not only is this discriminatory and counter-productive to peace, but it’s only reflective of a very tiny margin of Canadian society,” said Steve McDonald, deputy director of communications and public affairs for CIJA.The party’s policy on Israel and Palestine states that, “The Green Party supports a two-state solution to the Israel–Palestine conflict that addresses the security, economic, and religious concerns of both sides.”This is not the first time a Green Party has targeted Israel. In 2015 the Green Party of the United States also supported a resolution that urged a boycott of Israeli academic institutions.