Many Arab countries called for the summit to be cancelled, and now Israel's Foreign Ministry is saying that the event has been "postponed" without providing an alternative date. 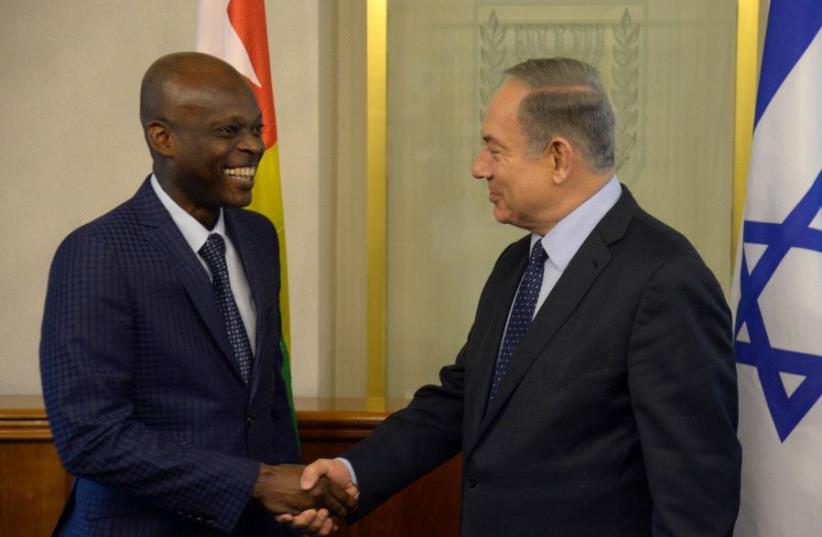 Netanyahu with Togo FM Robert Dussey
(photo credit: CHAIM ZACH / GPO)
Advertisement
The first-ever Israel-Africa Summit set for Togo in October has been canceled in the aftermath of boycott threats by a number of countries and pressure against the event from Palestinians and Arab nations.Prime Minister Benjamin Netanyahu had planned to attend the conference, which was expected to draw representatives from many of the 54 African countries.The summit was billed as a sign of Israel’s success in making new diplomatic friends and deepening the country’s economic ties with the African continent.
PM Netanyahu meets FM of Togo Robert Dussey
The slogan “Israel is returning to Africa” has been one of Netanyahu’s hallmark initiatives.In August, Netanyahu told the government, “Various pressures have been placed on the Togolese president to cancel the conference. These pressures are the best testimony to the success of our policy, of Israel’s presence in Africa.”But there is speculation that domestic issues in both countries led to the event’s cancellation.In Israel, these include the pending indictment of Sara Netanyahu and the ongoing criminal investigations of the premier.A diplomatic source said that the delay had nothing to do with international pressure or domestic internal concerns, but was solely the result of Togolese unrest stemming from street protests against the government.Thousands of people have taken to the streets in the past three days to demand that Togolese President Faure Gnassingbé step down, in the most serious challenge to his family’s stranglehold on power since the death of his father in 2005.The Foreign Ministry announced the summit’s cancellation while Netanyahu was en route to Argentina, in the first-ever visit by a sitting Israeli prime minister to Latin America.In its statement to the press, the ministry said that the event had been “postponed,” but it did not provide an alternative date.“At the request of the president of Togo and following a joint consultation with the prime minister, it was decided to postpone the convening of the Israel-Africa Summit, scheduled to take place in October in Lomé,” the ministry said.It added that an agreed-upon date would later be set by both countries.“In the near future, Israel will hold consultations in Africa, both on the bilateral level as well as in regional gatherings and fora on the continent, in order to guarantee the full success of the summit,” the ministry said.Gnassingbé, who visited in Israel in August, “thanked and praised the prime minister for his determination to strengthen the cooperation between his country and Israel, as well as for his personal engagement to guarantee the initiative to hold the summit,” the ministry said.Gnassingbé “also emphasized that this event aims to unite the efforts undertaken against the threat on peace and security, which undermines stability and slows down the development of the continent,” it said.“Israel is fully committed to continue its efforts vis-à-vis the African continent,” the ministry said.In 2016, Netanyahu visited Rwanda, Kenya, Uganda and Ethiopia. In June of this year, he was a guest of honor at the Economic Community of West African States Summit in Liberia.According to the Government Press Office, an ECOWAS delegation, with representatives of 20 countries, is now in Israel.“Israel believes that the African countries and Israel can only benefit from the continuation of practical cooperation between the two sides, and this is in important areas such as water, agriculture, health and technology,” the ministry said.Yosef Abramowitz, CEO of Energiya Global Capital, who has accompanied Netanyahu on his Africa missions and finances solar and wind farms in Africa, said that the prime minister should save face and recover momentum in Africa by appointing Dr. Avraham Neguise, chairman of the Knesset’s caucus for Israel-Africa relations, as foreign minister.“Having an African-Israeli at the helm of the Foreign Ministry at a time when the prime minister is seeking enhanced relations with Africa and a seat at the table of the African Union will take back the narrative from BDS [Boycott, Divestment and Sanctions] forces, who are celebrating the postponement of the Africa-Israel Summit,” said Abramowitz.